In Germany, Calls for a Socialist Housing Policy Are Growing Ever Louder 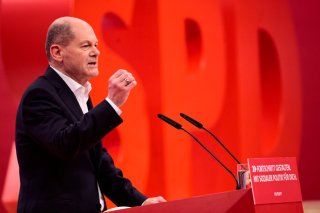 On September 26, 2021, voters in the German capital Berlin not only cast their votes in federal, state, and municipal elections, they also cast their verdict on a referendum proposition, named “Expropriate Deutsche Wohnen and Co.,” to expropriate housing companies. Once all of the votes had been counted, it was clear that a majority of Berliners had registered their support for the initiative’s demands: 56.4 percent backed the socialization of all large real estate corporations, such as Deutsche Wohnen, that own more than 3,000 rental apartments in the city.

Right now, a commission in Berlin is discussing the political consequences of the referendum vote. The mayor of Berlin, Franziska Giffey, proposed a law a few weeks ago that would allow tenants to reduce their rent if it amounts to more than 30 percent of their income. Giffey is a member of the SPD, the same party that appointed Olaf Scholz as chancellor of Germany.

But the demands are becoming increasingly radical, even from within the ranks of the SPD. “If everything were tutti here, then from my point of view everyone would only have the apartment they actually live in,” declared the SPD’s Secretary-General Kevin Kühnert a few days ago on a popular TV program. I first had to look up what “tutti” is supposed to mean. In Italian, “tutti” means “all” or “all together,” so “everything ... tutti” is a tautology and otherwise meaningless. But Kühnert uses it to express his vision of an ideal economic system, namely without private landlords.

In 2019, during an appearance on the popular political talk show Maischberger, Kühnert, then still chairman of the SPD youth organization Jusos, posed the following question: “By what right does someone own more than 20 apartments?” And in the same year, he declared in a newspaper interview: “I don’t think it’s a legitimate business model to make a living off other people’s living space ... Taken to its logical conclusion, everyone should own at most the living space in which they themselves actually live.”

More Socialist than the GDR

Thus, the SPD’s secretary-general wants even more socialism in the German housing sector than existed in the socialist GDR (Eastern Germany). After all, in the GDR, not only were 84.4 percent of one- and two-family houses privately owned, but so were 20.6 percent of apartment buildings. “Democratic socialists” always vehemently defend themselves against the accusation that they want to create conditions similar to those in the GDR. But Kühnert’s proposal shows that their economic policies are very similar: The basic conviction that, with the exception of owner-occupied housing, the only good housing is state housing is identical to the philosophy prevalent in the GDR. The only difference is that Kühnert wants to implement socialism in housing even more consistently than in the GDR, where private renting was regarded as undesirable and made more difficult, but every fifth apartment in a multi-family house still remained in private hands.

The rent freeze, another of the SPD’s pet policies, also prevailed in the GDR, whose leaders had adopted an analogous law from the Adolf Hitler era almost word for word. As a consequence of this policy, the last of the GDR’s problems was that living space per person was 22 percent lower than in the West (twenty-seven square meters versus thirty-five square meters). In 1989, when the GDR finally collapsed, 65 percent of all apartments—including 3.2 million postwar buildings—were still being heated with coal stoves, 24 percent did not have their own toilets, and 18 percent did not have a bathroom. Elevators, balconies, and modern kitchens were even less common, and 40 percent of apartment buildings were classified as severely damaged, while 11 percent were deemed to be completely uninhabitable.

At present, the SPD is unable to implement its plans because it is in government together with the Greens (who are quite sympathetic to such ideas) and the pro-market FDP, who are resisting them.

Rainer Zitelmann is a historian and the author of The Power of Capitalism and Hitler’s National Socialism.