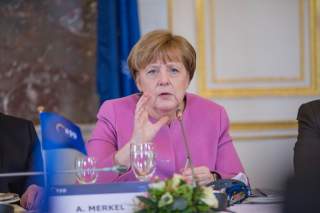 Malte Lehming, a columnist for the Berlin daily Tagesspiegel, didn’t mince his words: “Merkel is a magician.” He was referring not only to her party’s smashing victory in a state election in North Rhine–Westphalia this past weekend, but to her overall political prowess. “1.2 million refugees,” he said. “It’s not even an issue any more. And the borders are sealed.”

He has a point. Germany, more than ever, remains the economic powerhouse of Europe, with unemployment at record lows and federal budget surpluses, partly thanks to economic reforms pushed through by socialist chancellor Gerhard Schröder in the early 2000s. Berlin, the capital of a united Germany, looks to be booming as well. The center of the city boasts big construction projects such as a new subway line directly beneath Unter den Linden that will reach the Brandenburg Gate, as well as the reconstitution of the Berlin Palace, where Kaiser Wilhelm resided. It’s also pullulating with tourists, having transformed itself into an international destination. Even the old Berlin Wall has become a marketing opportunity, the ultimate insult to the old Socialist Unity Party that constructed it as an “anti-Western defensive wall.”

But it is memories of the Nazi era that continue to shadow Berlin and the rest of the country. In the past few weeks, the federal authorities have uncovered a network of neo-Nazis in the Bundeswehr who were apparently gathering weapons and munitions to carry out terror attacks. The Bundeswehr has always had a tricky historical relationship with the memory and traditions of the Wehrmacht, the most potent fighting force in Europe during World War II. Der Spiegel notes that over 80 percent of fifteen thousand Germany officers in 1959 had fought in World War II. Germany has for decades agonized over the degree to which the Wehrmacht was in fact directly involved in Hitler’s war of extermination, with an increasingly embattled rearguard trying to maintain the myth that it was not. An uproar has also been triggered by the discovery that a picture of former chancellor Helmut Schmidt in uniform during the war was hanging at the Bundeswehr University in Hamburg. Much chin stroking ensued over whether the photo was appropriate or not. Now Defense Minister Ursula von der Leyen is looking, among other things, to change the name of barracks named after Nazi generals.

For Merkel, however, these are political hiccups. The elections in North Rhine–Westphalia, where the Christian Democrats scored a decisive win, are known as the “little Bundestag” elections. These are the third straight state elections that the Social Democrats have lost, and Merkel’s challenger Martin Schulz has been severely weakened. He will have to go on the offensive, perhaps warning voters against a resuscitation of a black (CDU) and yellow (Free Democrats) coalition. The Free Democrats, who failed to pass the 5 percent hurdle in the last federal election, are looking to make a comeback under the leadership of the thirty-eight-year-old Christian Lindner, and scored a nifty 12.6 percent up from 8.1 percent in 2012 in North Rhine–Westphalia. The right-wing Alternative for Germany attained 7.4 percent but appears to have passed its high-water mark, as immigration has receded as a hot political topic.

The elections and the mood of the country suggest once more just how fundamentally conservative it remains. Konrad Adenauer’s slogan “no experiments” seems to remain its credo. Merkel, who stands for everything and nothing, the all-knowing Mutti, or Mother, as she is known, is on the verge of a win that will seal her place in history as one of Germany’s most influential chancellors. She will likely use Germany’s economic clout to reinvigorate the Franco-German relationship, box out Britain and ultimately reshape Europe, as far as possible, in Germany’s image. Don’t mess with Mommy.