For Germany, Trump is an Opportunity for a Look in the Mirror 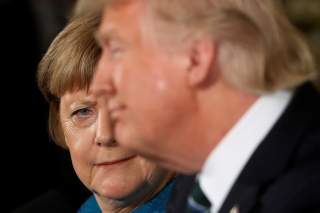 Like most international observers, Germans were aghast when Donald Trump won the U.S. presidential election in 2016. The state of shock that set in afterwards can still be felt today. In 2018, Germans appear to have lost faith in the transatlantic relationship altogether. Even political elites believe that the relationship is not going to survive four years of Trump, let alone eight. Regarding the question of which leader was the greater threat to world peace, 79 percent of polled Germans chose U.S. President Donald Trump over the Russian president Vladimir Putin. The matter seems settled, the United States simply can’t be trusted anymore.

To be fair, Donald Trump does present a challenge to the international order, especially to institutions like the WTO, as well as security and trade agreements. Furthermore, his brash rhetoric and tweets are often inexcusable and not worthy of the office he holds. There are, indeed, serious flaws in his thinking. Believing Putin when he says Russia did not interfere in the American election, against the counsel of the American intelligence services, does not magically improve U.S.-Russia relations. Free trade has been crucial to America’s economic success, and trade wars are not easy to win. And maintaining properly-functioning alliances with like-minded countries (as opposed to blatantly disrespecting them) is, actually, in America’s interest. The common commitment to democratic republicanism underlying NATO, for instance, functioned as a bulwark against totalitarianism, to name just one example.

Yet, for all of Trump’s obvious blunders, pundits often forget the distinction between rhetoric and actions. The president loves to brag about his tough-minded stance in negotiations and often highlights his achievements which, of course, only he could have delivered. One such example is his behavior during the recent 2018 NATO summit in Brussels. Before official meetings even began, over breakfast, Trump bellowed that Germany was a captive of Russia and repeatedly demanded the Federal Republic boost its defense spending. After showing up Chancellor Merkel at the summit, however, he later claimed NATO had become a fine-tuned machine. “People are paying money that they never paid before,” he declared. The president and salesman-in-chief enjoys bringing home good news to strengthen his support base.

In reality, however, nothing had changed. Germany had not suddenly agreed to spend the previously pledged 2 percent of its GDP on defense, nor had it revised its composure towards Russia and the Nord Stream 2 pipeline. Still, the United States signed NATO’s summit declaration, which stressed that the strategic (nuclear) forces of the Alliance, particularly those of the United States, are the “supreme guarantee of the security of Allies.”

Similarly, while the president continues to insist on his good relationship with Putin being beneficial for the United States and the entire world, the U.S. Congress has been tougher than ever on Russia. The expulsions of Russian diplomats coupled with sanctions on specific Russian individuals and entities to Ukrainian arms sales, as well as the continued commitment to NATO, highlight the fact that Trump’s rhetoric should not be equated with official U.S. policy. In foreign policy, it is what you do and not necessarily what you say, argued Estonia’s former President Toomas Hendrik Ilves in a recent interview. Regarding the defense of the Baltic countries and Poland, the Pentagon’s strong and continuous policy can hardly be questioned.

Underlying the German critique of the Trump administration is a larger issue. This is the failure to understand (or come to terms with?) America’s attitude towards international relations, which did not begin with the forty-fifth president. The United States needs the system less than anybody else and, therefore, approaches international organizations in a transactional manner. If consensus in the United Nations can be established to achieve a certain goal in the American interest, great. If not, there are other, unilateral, means, like prior to the invasion of Iraq in 2003. And while America has chosen to invest energy and resources into international cooperation in order to build a sense of confidence in shared values, the more realist administrations have mostly insisted on the limitations of the system. To most Germans, this approach is abhorrent. And, in 2018, Donald Trump serves as the justification for Germany’s decades-long resentment of America’s unilateralism, arrogance and failure to coordinate with allies.

Yet, the German reaction has been incoherent, to say the least. While reprehending America’s behavior, Germany is unwilling to face the disastrous state of its armed forces. Less than half (105 of 244) of Germany’s Leopard battle tanks, only twelve out of fifty Tiger helicopters, and only 39 out of 128 Typhoon fighter aircraft are fit for action, a February report revealed. All but one of Germany’s submarines are lacking vital replacement parts and are not operational, and only a fourth of the Eurofighters and Tornado jets are fit for flying. The Economist writes that as other European states are “girding themselves against possible Russian adventurism, the German armed forces are desperately short of equipment, money and, above all, public support.”

Chancellor Merkel, who has been trying to slowly increase the spending, faces opposition from her left-to-center coalition partner, the Social Democrats, who claim that military spending is counterproductive. A recent poll revealed that 36 percent of Germans thought defense expenditure was already too high. Either way, Berlin is nowhere near its pledge of spending 2 percent on defense and remains stuck at 1.22 percent. What many don’t realize is that the meager increase of $304 million that Berlin agreed on will immediately melt away in maintenance, upgrades, personnel costs and inflation, as Jan Techau from the German Marshall Fund in Berlin has argued. The way in which Germany is turning a blind eye to the state of its military reveals that it is not willing to step up to the plate. As German journalist Clemens Wergin wrote in the New York Times earlier this year, in the wake of Trump’s questioning U.S. security guarantees, Europe’s leading nation worries about the decay of the international order but is unwilling to pay for the military hardware to help secure it.

It is also distressing that seemingly all major parties in Germany, while hardening their anti-Americanism, are softening in their stance against Moscow. Of course, Trump misleads when he asserts that Germany receives 70 percent of its total energy imports from Russia (the actual figure, according to the German government, is around 9 percent). Yet, one does wonder if increasing that number exponentially with the Nord Stream 2 project is, in fact, the way to go.

Germany already receives 40 percent of its natural gas imports from Russia. The Nord Stream 2 pipeline would enable it to effectively double the amount of 53 billion cubic meters of Russian gas that it used up in 2017. This goes counter to the EU’s efforts to wean off Russian gas. Accordingly, Brussels does not back the project because it fails to diversify Europe’s gas supplies. Furthermore, the planned route which goes through the Baltic Sea bypasses Slovakia and Poland, leaving them without a chance to collect gas transit fees. It would be especially alarming to grant Russia the means to directly deliver gas to its most important European buyer, Germany, because Moscow could easily shut off existing pipelines that go through Eastern Europe. Can Germans truly feel good about this proposition? Is the Nord Stream 2 project, endorsed by former Chancellor Gerhard Schröder, who now represents the Russian gas giant “Gazprom,” really beyond criticism?

Fearing the worst about the transatlantic partnership might be all too natural for Germans. The perfectionism which fuels the country’s industrial success can easily turn into pessimism when things do not immediately work as envisioned. It is, indeed, a good idea to look for allies in a time of uncertainty, but, as with anything in life, one must not forget proportionality (or as Aristotle put it in The Nicomachean Ethics, the “virtue of moderation”). To fear Donald Trump more than the former KGB spy and now authoritarian Russian president Vladimir Putin is, frankly, absurd. The checks and balances of the world’s oldest constitutional democracy will continue to have the effect of reigning in a sometimes-rogue president. Additionally, public pressure matters in the West, as was seen after Trump’s disastrous Helsinki meeting with the Russian president. After bipartisan criticism mounted, Trump was forced to walk-back his initial statement of having no reason to believe that Russia would have interfered in the election. This is just one of many examples.

German leaders must stop conflating Trump with the United States. Even if they can’t find common ground or a community of values with this president, the conclusion that the West is at an end does not follow, writes Dirk Kurbjuweit in Der Spiegel. Reactions to Trump should be adequate, but not vengeful. Kurbjuweit is correct, Trump will go, but the United States will remain. And it should, indeed, remain Europe’s friend. Most importantly, Germany—and Europe as a whole—has work to do, regardless of who is in the White House. The negligence on security has gone on for too long, as has Berlin’s overall reactionary modus operandi in foreign affairs. It is time for an honest look in the mirror, to reconcile the divide between “Anspruch und Wirklichkeit”—ambition and reality.