Is Germany On the Verge of a Political Earthquake? 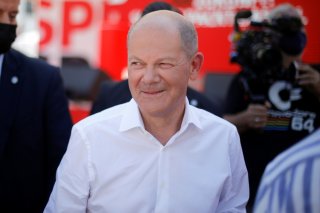 Never before in the history of the Federal Republic of Germany have the polls been so bad for the governing Christian Democratic Union (CDU) party. As recently as April 2020, Angela Merkel’s CDU was leading the polls with thirty-eight percent. Now, depending on the polling institute, the CDU has tumbled to between twenty-one and twenty-four percent. One reason for the party’s declining popularity is that they are running with a very weak candidate for Chancellor. Armin Laschet, currently premier of Germany’s most populous state, has so far failed to inspire both his own party and the wider electorate.

Above all, however, it seems that the left-of-center Social Democratic Party (SPD) is succeeding in deceiving voters to an extent that is also unparalleled in the history of the Federal Republic. The SPD has gained about ten percentage points in recent polls, mainly thanks to its top candidate, Olaf Scholz, who is widely regarded as a relative “moderate.” Yet Scholz has never been popular within his own party. In recent years, the SPD has moved further and further to the far left. It has elected Saskia Esken and Norbert Walter-Borjans as co-leaders and Kevin Kühnert as deputy leaders. All three of these politicians have adopted positions that are as left-wing as, say, Alexandria Ocasio-Cortez. In electing their party’s leaders, the SPD’s members explicitly decided in favor of these extreme left-wing candidates and against Olaf Scholz. So why did the SPD nevertheless appoint the “moderate” Olaf Scholz as its top candidate? For the same reason that the Democrats selected Joe Biden as their presidential candidate. They hope to use Olaf Scholz to mobilize moderate voters who are not as far to the left as the party’s traditional base.

Currently, the leading polls are all pointing toward a coalition of the SPD, the environmentalist Green Party, and the leftist Die Linke. Until just a few years ago, the SPD had always ruled out coalitions with Die Linke at the federal level because the hard-left party was too radical. Die Linke is the latest iteration of the former communist SED party that governed East Germany, having changed its name several times since German reunification. Die Linke is committed to an extensive program of nationalizations, a top tax rate of seventy-five percent, and withdrawing from NATO. Until a few months ago, the party’s new leader, Janine Wissler, was a member of a radical Trotskyist group.

The major focus of the left-wing Greens is protecting the environment and fighting climate change. Many in the German media support the Greens and, on Germany’s de facto state television, most journalists do very little to hide their sympathies. The German capital, Berlin, is already governed by a coalition of the SPD, Greens, and Die Linke. The Greens and Die Linke have thrown their weight behind a campaign to expropriate housing companies that own more than 3,000 rental apartments in the city. The Green’s co-leaders, Robert Habeck and Annalena Baerbock, have said they support expropriating real estate companies as a “last resort.” All three leftist parties would reintroduce the wealth tax, which was abolished in Germany in 1997.

The SPD and Greens are now pursuing a policy that can only be described as voter deception. Almost every day they are asked whether they are open to a coalition with Die Linke. While they do not rule it out, they are also careful not to openly profess that this is one of their goals because they know it would lose them thousands, if not millions, of votes.

A coalition of these three parties would radically change Germany. They are all committed to cutting German defense spending, despite the fact it is already low in comparison to other NATO members. What Angela Merkel has already started, namely the transformation of Germany’s market economy into a planned economy, would once again be massively accelerated by these three parties. In the capital Berlin, where the three parties already govern, it is clear what this would mean for the country as a whole: repeated violations of Germany’s constitution. For example, the three parties in Berlin passed a law that forced landlords to massively reduce rents on existing leases. In fact, the law represented nothing less than the partial expropriation of real estate owners. Germany’s highest court declared the legislation unconstitutional, but the SPD and Die Linke now want to introduce a similar law that would apply to the whole of Germany. Political freedom in Berlin is also coming under intense pressure, especially the right to demonstrate. While left-wing demonstrations are generally approved, demonstrations by critics of the government’s coronavirus policies, for example, are banned or broken up with brutal police force. What is happening in Berlin provides a foretaste of how Germany as a whole will change if the SPD, Die Linke, and the Greens come to power. On September 26, Germany votes—and this could very well be an election that radically changes Germany’s political landscape for many years to come.