Germany Is a Great Power—It Should Act Like One 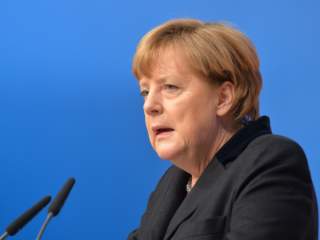 With Britain distancing itself from—if not leaving—the European Union, France increasingly self-absorbed and the United States possibly veering towards isolationism under a President Trump, it will be up to Germany to save Europe. But the signs so far are not encouraging. Germany’s ham-handed leadership of the euro crisis split Europe and paved the way for further backlash over Chancellor Angela Merkel’s impulsive diktat on refugees. From a Germany that once led from behind, we are now seeing a Germany awkwardly rocking the foundations of the European order. One is reminded of Churchill’s pejorative view of Germans as “always at your throat or your feet.” But the more apt quotation is from Twelfth Night: “some are born great, some achieve greatness, and some have greatness thrust upon them.”

The latter category is certainly what Germany faces and must now get right. Far from seeking greatness in the postwar period, Germans have done about everything to avoid leadership. Instead, they’ve been guided by two principles, justified in equal measure on moral and historical grounds: “No more war!” and “Auschwitz: Never again!” Every generation since the war has drawn the same instinctive conclusion: because Germany, in Kissinger’s apocryphal assessment, is “too big for Europe, [but] too small for the world,” it needs to outsource strategy to the United States, the EU, NATO or other supranational institutions. This worked well as long as there was consensus among Western democracies and little opposition to “an ever closer union” within Europe. Washington was committed to defending Europe, and there were no emerging new powers.

The key question is whether Germany is capable of forging a strategy and undertaking the planning that comes with it. The sobering answer is that its capacities are exceedingly limited. On the contrary, there has been an unspoken social consensus to get by without any strategy at all. To operate strategically, it is necessary to cultivate not only an aspirational vision that has broad social acceptance (e.g. seeing Germany as a great power in its own right) but also, most importantly, an idea of how visions of the future will play out in practical, everyday situations. In being the biggest power in Europe, Germany’s vision also needs to win acquiescence—if not outright acceptance—from its neighbors.

The reasons for Germany’s disavowal of strategy are obvious: the original foundation of the German nation-state was a geostrategic provocation in itself. It led to the First World War, which ended with a flawed peace that already bore the germ of a second global conflagration. The Second World War was conducted in the name of a German people that approved the physical annihilation of dissenters in order to secure what it felt was its rightful position in Europe and the world.

The euro crisis demonstrated how Germany, caught unprepared, reacts when its normative vision of the future collapses unexpectedly. The ensuing mix of muddling through, whistling in the dark and pronouncements that “there is no alternative” prompted the admonition from abroad that German power is now less a cause for fear than German inactivity. The remarkable thing about this particular phrase is not so much its content as its author: Radosław Sikorski, Poland’s foreign minister. According to Sikorski, structural reform in Europe could only be led by Germany, the “indispensable nation” (!)—despite criticism of Berlin’s crisis management and concerns about German dominance in Europe.

Increasingly there are signs that the postwar mindset is losing relevance as the new multipolar world takes shape. At the Munich Security Conference in early 2014, Germany’s Federal President, Joachim Gauck, warned that Germany is changing “from a beneficiary to a guarantor of international security and order.” In the face of limited American capacity to deliver, he said, Germany is in any case increasingly responsible for its own security and that of its partners.

“We would be deceiving ourselves,” said Gauck, “if we were to believe that Germany was an island and thus protected from the vicissitudes of our age.” Few other countries have such close links with the rest of the world as Germany does, he added, making it particularly vulnerable to any “disruptions to the system.” For this reason, “the consequences of inaction can be just as serious, if not worse than the consequences of taking action.”

The relevance of this statement became clear a short time later. Three weeks after Gauck’s speech in Munich, the barricades on the Maidan in Kiev were in flames, and four weeks after that Russia annexed the Crimea. And in June 2015, the Levant became the front line between “Orient” and “Occident” when Islamic State declared its caliphate.

In its efforts to come to terms with its recent past Germany may have been exemplary, but one thing is missing: the long overdue debate on Germany’s vital interests, and on the resources, skills and collective determination it must summon to assert them. Clarification of this will also require German society to conduct a broad-based discussion of when and why Germany would be prepared to go to war. Since the armed conflicts in the Western Balkans, Iraq and Libya, if not before, Germans have realized that “even the wars you don’t wage can change you,” as observed by Bernd Ulrich of Die Zeit.

While there is no clear cut recipe for undertaking “culture change,” a good starting point would be to build government capacity; fine-tune how governmental departments collaborate (the “whole-of-government” approach); draw clearer distinctions between short-, medium- and long-term planning horizons; and create new patterns for interaction between governmental and nongovernmental actors.

There’s a lack of coordination between departments on long term objectives and strategies—understandable, given that the United States’ postwar design was to make it impossible for Germany to do such things. There’s no mechanism for orchestrating and implementing holistic governance, partly because of Germany’s tradition of coalition government, which allows various political parties to control individual departments. The Chancellery by no means has the same powers of the U.S. National Security Council, undercutting its potential to develop a forward-leaning approach. Unlike even other European partners, Germany has been slow to formulate national security strategies to help inform others about Germany’s direction, sensitizing the public to the changing outside environment and to necessary changes in German domestic and foreign policy.

None of these changes are foolproof guarantees of a successful German strategy: other countries with more refined strategic processes are also finding it difficult to navigate an increasingly complex global landscape. However, without a credible future-oriented strategy in the German government, politics remains mired in the administration of present concerns and past achievements. In the public’s mind, pressure for change is tantamount to destabilizing what was previously a secure status quo. Without citizens having a sense of a strategy that can help manage change, the floodgates are thrown open to populism, extremism and fear-driven debate. In our increasingly volatile, uncertain, complex and contradictory world, the government needs to develop a stock of effective options for shaping a secure future and building resilience.

A worldview directed towards the future would almost certainly reach different conclusions about whether Germany can remain above the fray. This kind of strategic foresight should focus on how to refurbish the European project so that it attracts a new generation, no longer living in the shadow of the Second World War. It would have to probe new areas of potential conflict, such as the Arctic, which will soon be free of ice in the summer due to global warming and could become a new focal point for geopolitical rivalry.

Other, more traditional conflicts are here to stay. The civil war in Syria has already shaken Germany due to the flood of refugees, but hasn’t yet reached rock bottom. An overt Saudi-Iranian conflict could ratchet up the crisis to a much higher level, requiring Germany and Europe to cope with an even greater humanitarian disaster. Opting out of Middle East diplomacy is not an option. Meanwhile, as the United States pivots East, China is drawing closer to Europe with its Silk Road initiative, offering increased opportunities but challenges to the Western liberal order.

Finally, a new Cold War waged with modern instruments already is here, with Russia ramping up its intrusions in Ukraine and Syria, and the United States establishing a cyber command. German notions of privacy seem quaint and out of touch in this new struggle between old foes.

All these—and many other—possible futures barely register in the sights of strategic planners. This means, however, that German society will need to break its own taboo and accept Germany’s place as a great power that is able to draw upon a fully equipped arsenal of power, including military means. While that will be a necessary domestic conversation, Germany needs to conduct it with an eye to how others perceive it. Adolescence is a difficult transition, but more dangerous is a European and global order in which Germany never grows up.

Mathew Burrows is director of the Atlantic Council's Strategic Foresight Initiative. His recent book is The Future Declassified: Megatrends that Will Undo the World Unless We Take Action (Palgrave/Macmillan). In August 2013 he retired from a 28-year career in the CIA and State Department, the last ten being spent at the National Intelligence Council (NIC).