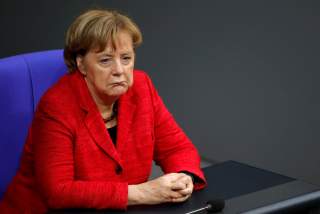 Already speculation is mounting that German chancellor Angela Merkel’s days are numbered. The failure of the so-called “Jamaica” coalition talks between the Free Democrats, Greens and Christian Democrats—Jamaica refers to the respective yellow, green and black colors of the three parties—has, so we are told, plunged Germany, once an island of stability, into a sea of churning instability. The German establishment—and much of the media—is castigating the Free Democrats and their young leader Christian Lindner for pulling out of the talks. He announced, “it’s better not to govern at all than to govern badly.” The result is that Merkel has been greatly weakened and even the specter of Weimar-like chaos hovers over the good, old Federal Republic of Germany.

Or does it? It’s now looking as though the more things change, the more they might stay the same. Now that the Jamaica coalition has blown up before it was even formed, the pressure is rising on the Social Democrats and their leader Martin Schulz to do exactly what they vowed not to—rejoin a grand coalition with the Christian Democrats. President Frank-Walter Steinmeier is meeting with various party leaders to try and forge a compromise. One possibility is that the Greens and FDP negotiate once more to form a Jamaica coalition.

The other is that a new grand coalition is birthed. It would hard to think of a better recipe for maintaining the stability that so many Germans crave. A grand coalition would buy some time and avoid the prospect of a new, snap election whose results could be quite unpredictable. The main beneficiary of a new election might well be the right-wing Alternative for Germany party, which could say that the mainstream parties are incapable of even the most basic task—forming a government.

The political downside of a grand coalition, of course, is that it amounts to a holding pattern. Neither the CDU nor the SPD has profited politically from this arrangement. In the last federal election each saw its tally sink, with the CDU receiving 33 percent of the overall vote and SPD an abysmal 20 percent. Meanwhile, the classically liberal Free Democrats returned to parliament with 10.7 percent and the Alternative for Germany got 13 percent, entering parliament for the very first time.

The idea of a Jamaica coalition has long been the dream of centrist Germans who were enraptured by the idea that the Greens, once vilified by conservatives as bunch of sandal-wearing, peacenik, environmental fruitcakes, could work together with the Christian Democrats. It’s already occurred at the state level, and the Greens have in fact moved a long way from their early days when “realos”—or realists—would duke it out with the “fundis”—fundamentalists. Since then the Greens have, by and large, gone mainstream. The last time the Greens were in government was under Chancellor Gerhard Schroeder when Joschka Fischer served as foreign minister.

As for the Free Democrats, it should come as no real surprise that they are reluctant to enter government. In terms of the party’s political future, it was probably the right move to pull out of the coalition talks with Merkel. The FDP’s last coalition with Merkel did not end well. Voters saw the party as a mere appendage of the Christian Democrats and the party failed to pass the 5 percent hurdle to enter the Bundestag, or federal parliament, in 2013. It was a painful climb to resuscitate the party’s political fortunes. Lindner, a clever and ambitious politician, has reinvented the FDP, including taking a harder line on immigration. He can continue to push the party to the right in opposition and raise its profile ala Sebastian Kurz who heads the Austrian People’s Party. ““I have the feeling that Lindner has been looking a little too much towards Austria recently,” Green party head Cem Ozedemir said.

One of the principal reasons that Germany has seen the return of the FDP and the rise of the AfD, however, is because the Christian Democrats under Merkel have steadily moved toward the center, much to the agony of the Christian Social Union, the Bavarian partner party of the CDU. Like Konrad Adenauer, the first chancellor of West Germany, Merkel’s motto, more or less, has been “Keine Experimente!,” or “no experiments.” It was Merkel who put the kibosh on nuclear energy after the accident in Fukushima, Japan. She also welcomed refugees from the Middle East, a move that has almost singlehandedly helped to create a viable new party on the right, the Alternative for Germany or AfD.

The AfD began as a fairly sober party that was focused on what its leaders saw as the catastrophic financial consequences for Germany of the Euro. It championed a restoration of the venerable deutsche mark. Since then the party, as Thomas Meaney has written in these pages, has drifted steadily toward the populist right, largely boosted by Merkel’s self-confessed immigration blunder in 2015. The party has developed a pronounced taste for historical revisionism about sanitizing the Nazi past. It’s leaders include the dyspeptic former CDU politician Alexander Gauland, whose heart’s desire is to destroy Merkel.

Now the question Germans are facing is simple: do they want to cut the cord with Mutti, or Mommy, as Merkel is widely known, and enter a new political era that fully breaks with the comforting certainties of the old Bonn republic? Or do they want to continue to clutch at her apron strings, secure in the knowledge that she can keep the Teutonic house in order, at least for a few more years before she finally steps down as chancellor?