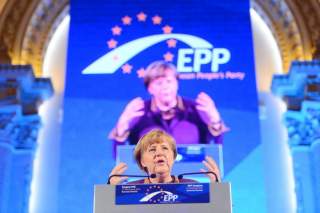 What a difference a century makes. One hundred years ago last week, European capitals were in the grip of the “July Crisis”: on the 23rd, almost a month after the Archduke Franz Ferdinand’s assassination in Sarajevo, Austria-Hungary finally delivered its ultimatum to Serbia. With bated breath, the world waited to see whether it would be war or peace. The answer would come soon enough and, with Germany’s coldhearted trampling of “gallant little Belgium” (whose only crime was happening to be located on the best invasion route into France), the Allies’ propaganda machines would swing into action, accusing the “vicious Hun” of a plot to subject the world to “Prussian militarism”.

Today, by contrast, Germany is probably having its best summer since 1914.

Reunified and at peace, it is indisputably Europe’s most dominant power, economically and politically. Leaving last year’s wobble behind, GDP growth hit 3.3 percent in the last quarter (compared to a measly 0.2 percent for France). And despite visceral British opposition, Germany-preferred candidate Claude Juncker has inevitably emerged as the next European Commissioner.

Internationally, German prestige has rarely been higher. Chancellor Angela Merkel—American president Barack Obama’s constant go-to in the Ukraine crisis—has acted more and more as if she were a joint leader of the ‘West’.

To many, Germany’s World Cup victory seemed to symbolize the country’s unique underlying strengths. In Britain, the Guardian’s Jochen Hung enthused that the German team showed us:

Today’s world lacks not leadership, but good teamwork. It may be less inspiring than one mighty nation dominating the field, but ultimately, like the squads built around Lionel Messi, Cristiano Ronaldo or Neymar, such orders and the political deals they create are fragile constructs.

Outwardly, the only blot on an otherwise glorious German summer would appear to be the painful NSA scandal—but this misdeed of a feckless ally has only magnified Germany’s innocent virtues, Merkel’s (it must be hoped, feigned) shock suggesting that nobody in enlightened, postmodern Berlin could possibly conceive of embracing such ignominious artifices of the “old diplomacy.” (Never mind what it might mean about her judgment if the leader of the world’s fourth largest economy didn’t expect to be spied on.)

Yet, for all the praises heaped this summer on Germany’s unique capacity for discipline, teamwork and sensible forward planning, the summer has actually exposed Germany’s profound organizational and cultural weaknesses, especially in terms of foreign policy.

A harder look reveals strategic blindness unworthy of a country with pretensions to regional leadership—and an apparently institutionalized failure to extrapolate the possible consequences of its policies that confirms traditional accusations of Germany’s lack of imagination, parochialism and weakness for solipsism. If it cannot be imagined that Germany itself would act in a certain way in a given situation, then it seems that, in Berlin, it also cannot be imagined that any other country could or would either.

The problem is that if there’s one thing delirious admirers have fallen over themselves to point out this summer, it is that the rest of the world isn’t Germany, nor does it approach its problems with German eyes.

Today, Germany’s biggest and most obvious foreign-policy failure is Ukraine, which has tested its consensus-driven politics—the country is ruled by a “Grand Coalition” between the major right-of-center CDU and the left-of-center SDP—and imposed a difficult juggling act on a country with an often ambivalent position between East and West in the so-called “new Cold War”.

A crucial NATO ally since 1955, Germany is also among Russia’s top trading partners and investment destinations: links between Russian and German business and political leaders are unusually close, a relationship best illustrated by former chancellor Gerhard Schröder’s current position as chairman of the board of the majority Gazprom-owned Nord Stream pipeline consortium.

Yet, while the Kremlin undoubtedly deserves the lion’s share of the blame for the blood spilt in eastern Ukraine since April, Germany’s role in precipitating the crisis there has received far less scrutiny than it should have.

Germany played a leading role in pushing the EU’s Association Agreement (AA) with Ukraine. It saw in it a means for promoting democracy, the rule of law and economic freedom in Europe, as part of the EU’s so-called Eastern Neighbourhood Policy. Indeed, Berlin insisted on tying the deal to former Ukrainian president Viktor Yanukovych's agreement to release his rival, Yulia Tymoshenko, from prison.

Berlin did not do anything to caution Brussels and neighbouring capitals in Warsaw, Riga and Tallinn on the risks associated with such a policy—though for years, Moscow had made clear its opposition to the eastward expansion of both NATO and the EU. (Indeed, the Kremlin has always viewed NATO’s foreswearing eastward expansion as the quid pro quo for its consenting to Germany’s reunification.)

If anyone ought to have known how the Kremlin would react as the EU courted Ukraine, it was Berlin: no European country has as great an economic interest or political influence in Russia as Germany.

Like the rest of Europe, however, Germany protested in surprise when, at the Vilnius Summit last November, Yanukovych rejected the EU’s trade deal. But it took little to see that the political and economic reforms the deal imposed would undo the source of Yanukovych's power and wealth. From Berlin’s point of view, that was, after all, the point.

As many in fact warned, Yanukovych, was playing Brussels off of Moscow for the best deal—and it seems he found it in the $15 billion Russian loan that tilted his hand.

Curiously, however, while there’s been no lack of critics of Washington, both for pushing NATO into former Soviet territory in the early 2000s and for “dancing on Yanukovych's (political) grave” in Kiev last year, criticism of Berlin’s diplomacy in Ukraine has been rare.

Yet it was Berlin that tied the EU’s Eastern Neighbourhood Policy to a trade deal that was conditional on a known dictator’s releasing a despised rival, a policy that suggests the staff at Germany’s embassy in Kiev doesn’t get out much. Moreover, its insouciance about Russia’s possible reaction paints an image of Germany’s Moscow embassy as staffed by people with the historical memories of goldfish—and the geopolitical nous of Heidi.

A few questions spring to mind. As Berlin prepared to push democracy in Kiev, who in Moscow were German diplomats talking to? And what did they tell their political masters in Berlin about Russia’s likely reaction to Germany’s digging around in Russia’s backyard? How highly did German policy makers rate the risk of conflict and what measures did they put in place to prepare for it? In view of the paltry prize on offer, did anybody ever ask whether all this was worth it?

In short, Germany failed to consider the strategic risk its Ukraine policy presented for itself and its neighbors and allies.

Instead, it pursued a democracy-promoting trade deal in Ukraine, which domestic factors made unlikely to succeed, even as it antagonized Russia, one of its closest trading partners. Apart from occasioning the Russian annexation of Crimea, this then left Germany’s panicked neighbors from the Baltic to the Black Sea facing the not-implausible prospect of a Russian invasion and entangled its American ally, the world’s only superpower, in Europe’s most dangerous great-power confrontation since the war scare of 1983.

The world has seen this before. In 1991, Germany acted alone in encouraging Slovenian and Croatian independence, incautious of the risk of interethnic warfare or the burden it would place on NATO shoulders if Yugoslavia’s unraveling turned bloody, as it in fact did.

Dissecting Berlin’s role in Ukraine, Stefan Meister, Senior Researcher at the European Council on Foreign Relations in Berlin, has written that the Vilnius fiasco “did not serve the EU well”: Germany’s “misreading of Russian and eastern neighbourhood priorities caused it to make missteps that have had an impact on EU initiatives.”

“Germany is not the only EU member that assessed the situation incorrectly,” he goes on, “but it played a leading role in pursuing the association and trade agreements that set off the crisis in Ukraine.”

Clearly, that is to let Berlin off the hook far too easily.

Moreover, far from bringing out the best in Germany’s much-envied consensus-driven politics, the crisis has laid bare the weaknesses of its Grand Coalition—the CDU/SDP alliance that has run the country since last year.

Merkel, leader of the CDU, has vented her irritation with what she clearly sees as “anachronistic” Russian meddling in its neighbors’ affairs. Despite Germany’s powerful business lobby, she’s mainly stood with American president Barack Obama in keeping up at least the threat of further sanctions—even if she’s been reluctant to impose them.

As the summer has worn on, however, the so-called Russlandversteher have seemed increasingly in charge of Germany’s Ukraine policy.

Willy Brandt’s Ostpolitik, favors cooperation rather than confrontation with the Kremlin.

Starting with a hastily arranged meeting of German, French, Russian and Ukrainian foreign ministers in Berlin the day after Ukrainian president Petro Poroshenko’s renewed offensive against the rebels, they’ve repeatedly called a cease-fire the first, “necessary step to defuse the situation.” “Even if the situation in eastern Ukraine has shifted in favour of the Ukrainian security forces,” Steinmeier said on July 7, “there will be no purely military solution to the conflict.”