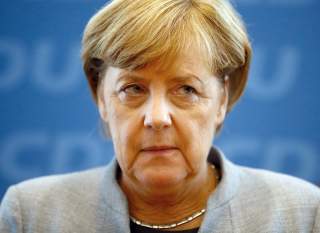 Government formation in Germany is approaching a crunch point. The main center-right (CDU/CSU) and center-left (SPD) parties have reached an agreement on a new grand-coalition government, similar to that which preceded inconclusive national elections last September. The crunch point will be a referendum on that agreement by the dues-paying, card-carrying membership of the Social Democratic Party.

While many Germans vote SPD, only about 460,000 of them shell out real money to have a party card in their wallets and hence a chance to vote on the proposed coalition agreement of their leadership with Christian Democratic Party leader and chancellor Angela Merkel. This is an event without precedent. German political culture is top down: institutional leaders decide and the rank and file follow. The SPD recently held a national-party convention that narrowly gave party leader Martin Schulz a go-ahead to complete coalition negotiations with Merkel. By German political tradition, this should have been enough to bring about actual coalition and government formation within days.

However, German politics today do not conform to postwar traditions, as the September elections demonstrated. Politics are increasingly fragmented, with party loyalties at record lows. The CDU/CSU and SPD once shared 90 percent of the vote; in September they won only 53 percent, the worst showing since the war for both. The Alternative for Germany achieved national stature with 13 percent, to become an established political voice on the far right, something German leaders had promised Europe would not happen. Several parties have faced near-death experiences recently, including the Free Democrats (FDP) who came back from the brink in September, and the Bavarian Christian Socialists (CSU) who in September looked over the brink by almost failing to achieve the threshold of 5 percent of the national vote needed for party-list representation in the national legislature, the Bundestag.

These are things which are not supposed to happen in Germany, but now they do. Younger voters and voters of all generations in the east (the former German Democratic Republic) simply do not care what is “supposed” to happen. They are angry about mass migration from outside Europe, the erosion of public education and infrastructure, a two-tier job system, which deprives younger workers of the perks of their parents, and paying for European Union programs. This anger may appear curious to outsiders as Germany today enjoys employment levels, public services and prosperity beyond the expectations even of other European countries. However, many German voters are simply tired of the same old national political leadership. While broad confidence in Angela Merkel remains high after twelve years in power, enthusiasm for another term with her as chancellor is low, and very low among SPD members.

Americans watching this process should keep four things in mind.

First, as there is no precedent for a party referendum on a coalition agreement, predicting an outcome is something of a mug’s game.

Second, the SPD leadership agreed to this referendum gamble with reluctance, as it knows the party rank and file do not want a renewed Grand Coalition. The referendum is therefore a confidence vote in Martin Schulz, who has been something of a fizzle as party leader. In addition, referenda are often high-risk political maneuvers because they generate negativity. The “yes/no” options encourage frustrations and anger among voters without compelling them to choose an alternative and its consequences (as BREXIT demonstrated).

Third, many SPD members are very frustrated and angry. They regard recent party leaders as pale echoes of such stalwarts of the past as Willy Brandt or Helmut Schmidt. They believe that two periods in coalition governments as second fiddle under Merkel have been disastrous for SPD identity, cohesion and morale. They resent the encroachment on traditional SPD voters from both the Left Party and the right-wing Alternative for Germany, which they attribute to the years in coalition. Above all, they regard Angela Merkel as toxic for her political partners (including the CSU and FDP). Many SPD members—and especially the youth wing JUSOS—believe their party needs years in opposition to restore its purpose and appeal to voters. Taking a lesson from the UK Labour Party’s election of Jeremy Corbyn, JUSOS is encouraging young people outside the party to purchase short-term SPD membership solely to vote “no” in the referendum.

Fourth, party membership in Germany has no true analogue in America. The SPD members who will decide the fate of the coalition agreement literally carry cards. They pay good money year in and year out to manifest their personal identity as social democrats. This is not a matter of political convenience; rather, it is faith based. Dues-paying and card-carrying SPD members take very seriously the history and mission of their party. They are proud of the SPD, which is the oldest political party in continental Europe, and they believe it remains the standard bearer of the non-Leninist left in the Western world. This is serious stuff, not merely the business of who gets which corner office in Berlin. For many SPD stalwarts, the issue is “we survived Bismarck, Hitler, two world wars, Stalin and finance capitalism; now we must survive Angela Merkel.”

SPD members will approach the referendum with alternate visions of their party’s future: first, a period in the wilderness to restore its strength and integrity, probably after a generational leadership shakeout; or, second, a more dynamic coalition role than in the past while looking to pre-term elections rather than a full four years in office. The first option would likely trigger new elections this year, with the popular credibility of the SPD lower than it was in September. Both options are high risk, and demonstrate how far the party has fallen even in the eyes of its faithful.

For Washington, the lesson from these developments is that easy assumptions about Germany under Angela Merkel’s leadership are obsolete. Even with the same face in the chancellery in Berlin, Germany is losing political predictability—and perhaps its reliability.

E. Wayne Merry is senior fellow for Europe and Eurasia at the American Foreign Policy Council in Washington, DC.