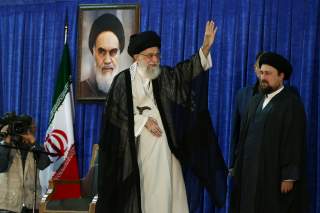 The uneasy balance between Iran’s moderates under President Hassan Rouhani and the hard-liners, known as principlists, was shaken by the Tehran terror attack on June 7. The authorities reported that five Iranian Kurds carried out the assault on behalf of ISIS, and that scores of others were involved in providing support.

During the run-up to the election in May, Rouhani and his followers made the successful argument that Syria was fast becoming “Iran’s Vietnam,” a costly and ultimately unwinnable engagement with little contribution to the country’s security. The principlists, including the Revolutionary Guards and clerics of the Haqqani School, responded that Syria was the “thirty-fifth province” of Iran that serves as a security buffer in the turbulent region, and is therefore to be defended with great resolve.

Following the attack, the hard-liners have strived to bolster this claim. The newspaper Kayhan, a mouthpiece of Ayatollah Ali Khamenei, noted that “although the terror attacks in Tehran were unpleasant, they had blessed results. . . . Imagine if, five years ago, we had not go to help Iraq and Syria: those countries would certainly have fallen under the control of those terrorists who attacked Tehran on Wednesday.” The daily then asked, “What would our situation look like if the two takfiri countries were our neighbors? Each day we would experience a streak of terror and suicide attacks in any part of the country, just as in Iraq, Syria and Libya.”

Farsi media soon reported that the Majles was preparing legislation to support the continuing intervention in Syria and Iraq. On June 11, Abdolreza Rahmani Fazli, the interior minister; Mahmoud Alavi, the minister of intelligence and security; and Commander Brigadier General Hossein Salami, the deputy commander of the Revolutionary Guards, met in a closed session with Majles members. According to reports, there was unanimous agreement that the country should base its security policies on the new developments. Members vigorously supported increased efforts by the Guards and its foreign operations unit, the Quds Force, to fight terrorism outside Iran—namely, in Syria.

Forced to side with the hard-liners, President Rouhani stressed that terrorist acts would not weaken the determination and resistance of the Iranian nation, and emphasized that “Iran supports Syria in the war against terrorism despite challenges ahead.” Unsurprisingly, his government applauded the Guards’ missile strike on an ISIS facility in Syria on June 18.

Increased support for the Revolutionary Guards could change dynamics in Syria, where all sides have tried to wrestle as much territory from ISIS as it retreats. In addition to the Syrian army, the National Defense Force—a paramilitary group that the Revolutionary Guards created in 2013—and the IRGC Quds Force, there are currently five pro-Iranian militias operating in Syria: Lebanese Hezbollah, Syrian Hezbollah, the Fatemiyoun Brigade, the Zeinabiyoun Brigade and Liwa Zulfiqar.

Some of these forces have been deployed in securing a critical overland route for resupplying Lebanese Hezbollah. According to Kurdish intelligence sources, the Guards moved the original Syrian section of the course 150 miles to the south, to avoid American-supported forces. The new line is expected to pass through Mayadin, Deir al-Zour, Damascus and Homs, and end at the port of Latakia.

But the United States has tried to disrupt the Iranian land bridge by seizing several strategic positions from ISIS. In one of them, Tanf, an American garrison has been training anti-Assad fighters. The Americans declared the area around Tanf a “deconfliction zone,” that is, a fifty-five-kilometer exclusion zone. However, Qassem Suleimani, the head of the Quds Force, decided to challenge the no-go zone. On June 6, American warplanes bombed an Iranian-backed militia that tried to enter the territory. Two days later, an American jet shot down an IRGC Shahed-129 drone that crossed into the exclusion zone.

And on June 18, the Air Force shot down a Syrian plane near a town outside Raqqa controlled by the Syrian Democratic Forces, an American ally. According to a spokesman, the Syrian jet had dropped bombs near an American coalition force engaged in anti-ISIS operations. Joseph Dunford, chairman of the Joint Chiefs of Staff, justified the action, stating that the Americans needed to protect their personnel. Previously he explained that it “was a force protection strike. Our commanders on the ground felt like they were threatened at that point. And their rules of engagement allow them to do that.”

The complex geography of the conflict makes escalation virtually unavoidable, not just around the border crossing, but also in the south of Syria, where several anti-Assad rebel groups have come under a sustained assault by Iranian-sponsored forces. For instance, the Syrian army and Iranian-led paramilitaries have besieged a rebel group in Daraa, near the Jordanian border. The battle in Daraa, which is a gateway to the Golan Heights, has been watched closely by the American military, but there is still no official administration policy on how to deal with an invigorated Quds Force. Having learned the cost of entanglement with pro-Iranian Shia during the war in Iraq, the Pentagon has allegedly resisted the White House’s demand to broaden the battle against the network of Iran-sponsored forces.

With moderates considerably weakened by the terror attack in Tehran, the hard-liners have announced their resolve to fight in Syria to the end. More ominously, IRGC commanders have implied that their missile strikes against ISIS on the day of the downing of the Syrian jet was a signal to the United States. In other words, should the Pentagon change its policy of limited engagement, the IRGC would be ready and willing to respond.

Dr. Farhad Rezaei is a research fellow at Center for Iranian Studies (IRAM) in Ankara where he researches Iran’s foreign policy. He is the author of Iran’s Nuclear Program: A Study in Proliferation and Rollback (New York: Palgrave Macmillan, 2016). He tweets at @Farhadrezaeii.