Get Ready For a New Arms Race: Why Nuclear Strategic Stability Won’t Work With China 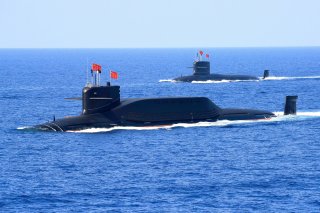 First, while the common estimate of China’s nuclear weapons is approximately three hundred, due to China’s lack of transparency, it is possible that China has significantly more than this estimate. This month, there have been calls within China for expanding its nuclear arsenal to one thousand strategic warheads, to say nothing of nuclear weapons on intermediate-range or other forces. While the United States has taken a “strategic holiday,” the People’s Republic of China (PRC) has used the opportunity to expand their arsenals, as well as cyber and conventional capabilities. When one reflects upon the considerable effort to create strategic systems, as well as cyber and conventional capabilities, inescapable conclusions are, first, that the causes of their expansion is rooted in their own grand strategic objectives of achieving hegemony and, second, the decision to expand their forces was sown long ago. China has used our strategic passivity to expand.  What Reagan’s Secretary of Defense Casper Weinberger said in the Soviet context remains true today: "When we build, they build, when we stop, they build.”

The growth of Chinese arsenals cannot be divorced from other evidence of China’s expansion. They are expanding their bases, for example, in Djibouti and Gwadar, and alliance networks including through the Belt and Road Initiative and “debt diplomacy,” the creation of new international institutions to supplant extant ones, and aggressive intelligence operations.  These measures indicate that China is a non-status quo great power but is a revisionist—and one that seeks change immediately. This bodes ill for strategic stability.

Most concerning is that China’s build-up might allow it to race to parity or superiority with the United States, which would result in an intense arms race. China’s actions make it a threat to strategic stability. To maintain strategic stability requires modernizing U.S. strategic systems, including missile defenses, and conventional capabilities.  Not to do so invites a direct and existential strategic challenge to the security of our allies and ourselves.

Second, the form of China’s build-up is notable. Always secretive, the Chinese have occluded their nuclear expansion as they do not want to provoke a premature reaction from the United States or its allies. More damning is that the Chinese are secretly “preparing the battlefield” to ensure that they have the ability to damage the United States through other, nonnuclear, means. These nonnuclear avenues of attack include cyber, control of space, supply chain dominance, economic influence, technological mastery of 5G and increasingly artificial intelligence, soft power, and the continued legal and illegal access to America’s knowledge, intellectual property, finance, and technology to facilitate Beijing’s growth. This would ensure the United States could be damaged sufficiently—in effect, a near equivalent of a major nuclear attack—to cause U.S. political leaders to yield in a crisis or limited war without the employment of nuclear weapons. China might launch one or more cyber attacks on the electrical grid and on the ability of the United States to recover and rebuild its electrical grid after a significant cyber attack. This is likely to be a direct attack in the cyber realm but the damage might also be inadvertent due to the unintended consequences of an attack against another target. Moreover, the risks of electromagnetic pulse (EMP) to the U.S. electrical grid is also a possibility. The vulnerability of America electricity to EMP—whether from deliberate EMP attack, cyber attack, or solar activity—and the ability to recover the electrical grid in the wake of an event is an issue that must be solved now.

Third, China rejects arms control in practice and in principle. Thus far, Beijing will not unilaterally reduce or limit its arsenal or enter into arms control talks. That is a worrisome sign and suggests that U.S. assumptions about the causes of stability in a great power relationship are only its own, and not shared by China. A major objective of arms control is that it can promote stability in the relations between states. The state willingly abandons or limits a class of weapons to demonstrate to other actors that its ambitions are limited and it supports strategic stability. By entering an arms control regime, China could show that it accepts the value of arms control and seeks confidence-building measures, which aids stability while demonstrating that China is a status quo power. Fundamentally, it would allow China to signal its peaceful intentions, and, in turn, have an important stabilizing effect on states concerned with China’s increasing power. The fact that China rejects arms control is troubling and suggests, first, it is a revisionist power, and second, that it wants to be unfettered as it expands its arsenal.

These developments mean that strategic stability is unlikely to obtain. China is likely to race for superiority, and that is destabilizing, and the United States must ensure this never occurs and must prepare itself for the return of an arms race. Given the PRC’s unprecedented expansion, the United States must respond by modernizing its capabilities to deter them from threatening the homeland, U.S. military, and its alliance commitments. These are critical steps to deter them from the temptation to race to parity or superiority, which could result in the collapse of U.S. credibility and alliances. Lastly, the United States must ensure that its vulnerability to non-nuclear forms of major economic and societal damage to the U.S. homeland is addressed.

Bradley A. Thayer is a professor of political science at the University of Texas at San Antonio and is the co-author of How China Sees the World: Han-Centrism and the Balance of Power in International Politics.