Get Ready for the India-Japan Partnership 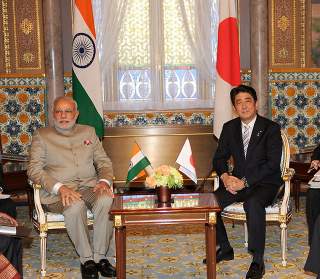 While Japanese prime minister Shinzo Abe’s visit in December last year had reaffirmed the desire to transform the Japan-India Strategic and Global Partnership to a deep, broad-based and action-oriented partnership, Indian prime minister Narendra Modi’s three-day visit to Japan, from November 10–12, was an opportunity for the two countries to review the process in the relationship and lay out a future plan of action to deepen engagement. It was in this context that both prime ministers discussed a wide range of issues of common interest, relating to economics, politics, security, climate change, infrastructure, manufacturing, UN reform and other matters. The two leaders also welcomed the high degree of convergence in the two countries’ political, economic and strategic interests that provides an enduring basis for a long-term partnership.

The joint statement issued at the end of Prime Minister Modi’s visit mentioned several major agreements that, in turn, would help buttress bilateral ties. Of course, the signing of the nuclear agreement is the most important one. This agreement is a very significant development in bilateral ties, in view of the fact that Japan has in the past been very critical of India’s nuclear program, and had imposed economic sanctions following the 1998 Pokhran tests. Thus, the agreement indicates that Japan has now come to recognize India as a responsible nuclear power and acknowledges the country’s reasons for developing its nuclear arsenal.

This can further be deduced from the fact that India has become the first non–NPT signatory country with which Japan has agreed to have nuclear cooperation. Apart from boosting strategic ties between New Delhi and Tokyo, the agreement would facilitate the sale of U.S. nuclear reactors to India—in the sense that two Japanese owned/controlled companies, GE-Hitachi and Westinghouse, which are major nuclear manufacturers in the United States, can speed up the process of investment in the civil-nuclear field in India, since Japan will no longer oppose removing the tracking clause from the U.S.-Indian nuclear agreement. In addition, India could access advanced nuclear technology at low prices, because the agreement will reduce dependence on France and Russia. This agreement would help revive Japan’s nuclear industry, which has been in bad shape since the Fukushima nuclear accident.

Economic and trade relations form another segment of bilateral ties. Modi views Japan as an important player in realizing India’s desire to achieve double-digit growth rate. The Indian government feels that its Make in India initiative cannot succeed unless there is a degree of synergy between India’s “Act East” policy and Japan’s “Partnership for Quality Infrastructure.” Without world-class infrastructure, the Indian market cannot be suitably attractive to foreign investors. Secondly, China has made huge investments in other South Asian countries over the past several years. For instance, President Xi has laid out bold plans to spend $46 billion developing the China-Pakistan economic corridor running across the Karakoram Mountains to the Arabian Sea. Thus, Japan’s increasing engagement in development projects in India would help Delhi to balance its position vis-à-vis Beijing in this region. On the other hand, Japan sees good prospects in promoting economic ties with India, in view of the latter’s huge domestic market and natural resources. This has been further boosted by the Modi government’s efforts to remove obstacles to doing business in India. Abe has commended Prime Minister Modi’s strong initiatives such as “Make in India,” “Digital India” and others.

It is in this context that the two leaders’ emphasis on completing the Mumbai-Ahmedabad high-speed rail project assumes huge significance. Above all, it underlines the commitment of the Abe government to help India in building infrastructure by providing world-class technology and skills. The agreement on building a high-speed railway system between Ahmedabad and Mumbai would help Japan revive its infrastructure exports. In fact, ever since Japan lost a high-speed railway project in Indonesia earlier this year to China, Japan has seen the project in India as crucial to challenging China’s rise as a leader in infrastructure building, in Asia as well as elsewhere. The two countries have agreed to establish the Japan-India Institute for Manufacturing, which will provide training to thirty thousand people over next ten years. This in turn would help India to enhance its manufacturing base through the “Make in India” and “Skill India” initiatives.

Another area that has emerged as a cornerstone of the relationship is defense ties. In this context, Modi and Abe reiterated their commitment to deepen cooperation in the field of defense, which will help them promote peace and security in the Indo-Pacific region. In so doing, while India and Japan have already formed a trilateral concert along with the United States, and Japan has started participating in the Malabar joint naval exercise with the United States and India, the two countries have reaffirmed their commitment to expand their defense engagement. This can be gauged from the fact that Japan has agreed to provide India with its state-of-the-art defense platforms, such as the US-2 amphibian aircraft. At the same time, Tokyo has also agreed to work with New Delhi in the codevelopment and coproduction of defense equipment through the Joint Working Group on Defence Equipment and Technology Cooperation. This, in turn, would facilitate India’s efforts towards independence in defense manufacturing.

More significant was the joint statement’s reference to the South China Sea. The two prime ministers reiterated their commitment to respecting freedom of navigation, overflight and unimpeded lawful commerce, based on principles of international law, especially the United Nations Convention on the Law of the Sea, and called upon all states to avoid unilateral actions that could lead to tensions in the region. India and Japan’s affirmation of shared interests in the disputed South China Sea has focused on countering China’s continued claim that the South China Sea is its exclusive domain, especially since, despite the Permanent Court of Arbitration at The Hague rejecting Beijing’s claims, China continues to assert its position there. In a significant move, the leaders also agreed to work together in Africa, with the objective of synchronizing their efforts and exploring specific joint projects, including in the areas of training and capacity building, health, infrastructure, and connectivity. While this collaboration between India and Japan would bring them economic benefits, it would also enable them to arrest China’s increasing clout in the African continent.

South Asia also received significant attention during the two leaders’ discussion. They expressed concern over growing terrorist activity around the world and pledged “zero tolerance.” Abe backed India’s efforts to bring terrorists to justice, including the perpetrators of the November 2008 attacks in Mumbai. In turn, the statement clearly indicated that Japan shares India’s concerns regarding Pakistan’s role in abetting cross-border terrorism from its territory against India. The two leaders’ agreement to develop bilateral and trilateral cooperation, inter alia, to develop infrastructure and connectivity for Chabahar and promote peace and prosperity in South Asia and the neighboring region, including Iran and Afghanistan, reflects their countries’ commitment to developing a strong balance of power against the China-Pakistan nexus.

Recognizing India as the largest democracy and a fast-growing major economy in the Asia-Pacific region, Japan has firmly supported India’s membership in APEC. India’s induction into this group would further enable the two countries to promote their “Free and Open Indo-Pacific Strategy.”

Given that there is a growing convergence of interests between the two countries in security, economics, space, science and technology, and other fields, the bilateral relationship is set to achieve new heights in the coming years.