Get Ready: China Could Pull a 'Crimea' in Asia 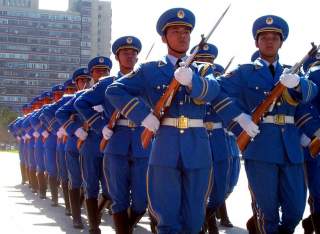 Zhang Wenmu [张文木] is a major fixture of the Chinese foreign policy debate.

Unlike many of his colleagues in the Beijing foreign policy scene, he does not frequent seminars and workshops with Western counterparts. He has remained noticeably apart from the "jet-set" of Beijing talking heads that are racking up thousands of airline miles with monthly visits to various think tanks in Washington.

Toiling away at Beihang University (previously the Beijing University of Aeronautics and Astronautics), he lacks the academic pedigree of more famous Chinese strategists at Tsinghua, Peking, or Fudan Universities. But maybe this has only increased his reputation as a "real Chinese strategist" that refuses to be dazzled and charmed by Western institutions and doctrines.

Zhang has unquestionably left a mark on Chinese strategy in the new century. He was one of China's first genuine "navalists," calling for Beijing to build an aircraft carrier well before other scholars were willing to get behind the new approach. His 2009 book On Chinese Sea Power [论中国海权] argues that Chinese global commercial power must have a formidable navy to support it, which may one day earn him the title of “China's Mahan.”

But even though many of Zhang's ideas now seem like conventional wisdom among Chinese strategists, he still has a unique approach and will occasionally articulate positions that go quite against the grain. For example, in 2009 he cautioned that China should avoid any major involvement in the South China Sea dispute, observing that such an approach might distract from the central goal of unification with Taiwan.

Zhang continues to be a prolific writer. A lengthy essay of his appeared in a late 2014 issue of the prestigious Chinese academic journal International Politics [国际政治]. The essay was being republished, suggesting its importance. Its title is “The Meaning of the Ukraine Events for the World and also their Warning to China.”

An early edition of this Dragon Eye column revealed another eminent Chinese strategist suggesting that Putin was now very widely admired among Chinese. In that same column, I also demonstrated that at least some Chinese military thinkers similarly admired Russia's bold seizure of Crimea in early 2014.

In probing the thoughts of Zhang Wenmu on the Ukraine Crisis, this edition of Dragon Eye seeks for a deeper understanding of the impact of the major events in Eastern Europe on the evolving situation in the Asia-Pacific.

According to Zhang’s rendering, Russia has won a major victory against the West and Putin is a master strategist. Zhang is not shy about proclaiming the Ukraine Crisis as affording a major “经验教训” [lesson of experience] for China. Zhang states that Moscow triumphed because for Russia, the Crimea is a matter of life and death, while for Europe it is simply one of many important issues. “For [Crimea], Russia would commit all its resources, but the West would not do so.” Zhang recognizes that many Soviet leaders were either reckless (e.g. Khrushchev) or excessively idealistic (e.g. Gorbachev), but he maintains that Putin has followed Stalin’s pattern of realism and even “克制” [restraint].

Appraising Russia’s geopolitical potential, Zhang surmises, “… historically, Russian power could not be projected very far, but as for reaching eastern Ukraine, there’s no problem at all.” He further suggests that the rise of Putin was, more or less, inevitable because “… a nation in the midst of crisis tends to produce its own vigorous leader.” But he explains that the basis of Putin’s success in “halting NATO’s eastward expansion” lies ultimately in the formation of “全民共识” [national consensus]. China may also develop such a powerful national consensus, asserts Zhang, with a similarly important geostrategic impact.

Now that Putin has halted NATO’s eastern march, Zhang writes “… Westerners begin to cast their gaze upon China. They will certainly demand an answer from China: where is China’s bottom line?  For China, the most offensive mistake made by Westerners is that they are extremely frivolous.”

Turning to the ever more pressing issue of developing Russia-China ties, Zhang states unequivocally: “The biggest error in U.S. foreign policy in the new century has been to push China in the direction of Russia.” In that light, he makes the interesting observation that “if there had not been stability on the Chinese-Russian border, Russia’s seizure of Crimea during 2014 would been impossible to imagine.”

He opines that recent American leaders such as President George W. Bush or Secretary of State Hillary Clinton “only know empty rhetoric and have no strategic sense.” In his view, the U.S. “Pivot to Asia” represents “an attempt to return to the 1950s American intention to create a ring of encirclement around China.”

This Chinese strategist views the Ukraine crisis as a moment of clarity in world politics. In that respect, he is highly critical of his Chinese colleagues who maintain that “strict adherence to the law...will smoothly resolve all issues.” Likewise, he does not believe that China should put its faith in “soft power.” He writes: “… the Russian people did not rely on ‘soft power,’ but rather directly employed tanks to resolve the problem.” He also argues strongly against Chinese scholars who maintain: “…别跟美国斗, 美是老大, 跟老大斗是没好结果的” [do not struggle against the United States. The United States is the boss. A struggle with the boss will not have a good result]. “Such thinking is mistaken,” he states emphatically. To illustrate the fallacy of a submissive Chinese policy, he suggests that during its own period of national growth, United States did not shy away from direct confrontation against then hegemon Great Britain with good results. Warning his countrymen against appeasement, he says that if China does not stand up to the West, then the West will inevitably “得寸进尺” [given an inch, seek for a mile]. As for Washington, Zhang quotes Mao Zedong saying that “...the United States...may appear to be a huge monster, but is actually a paper tiger….”

At the conclusion of the essay, Zhang seems to argue for a more muscular Chinese diplomacy, observing that trade is everywhere deeply impacted by politics. However, he is most forceful and clear in arguing that China now requires a “安全空间” [security space], without which it cannot be truly secure. This space is intended to protect China’s “黄金地带” [golden belt] along the eastern seaboard and Zhang views Taiwan as the key bottleneck, holding in check the full development of Chinese sea power that will enable protection of this zone and ultimate security for China. Asking rhetorically if “we can achieve this goal [of unification with Taiwan],” Zhang answers his own question by saying that “yes, we can. In the Ukraine Crisis, Putin was able to extend his security zone all the way to the south of Crimea, but NATO had no recourse, because [Crimea] lay beyond the reach of its power….”

As stated above, Zhang’s views likely do not represent the outlook of the majority of the Chinese foreign policy establishment, which is generally more polished and politically correct.  While he might be described as a “hawk’s hawk” among Chinese strategists, Zhang himself does warn China against the wrong-headed pursuit of “过于扩展” [excessive expansion] undertaken by the other great powers. Nevertheless, his writing still serves as a timely reminder that Beijing, should it opt to follow Moscow’s lead, could actually be much more “assertive” than pitching sand about and parading around various reefs with lightly armed cutters.

Editor’s Note: The following is part thirteen of a new occasional series called Dragon Eye, which seeks insight and analysis from Chinese writings on world affairs. You can find all back articles in the series here.