Getting ‘International Recognition’ of Taiwan Right Before It’s Too Late 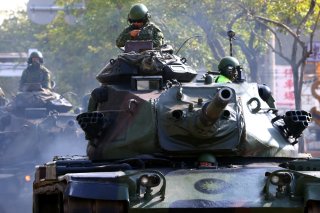 Noting that Russian Federation president Vladimir Putin relentlessly signaled his designs on Ukraine but that the world did not take him at his word, Marc A. Thiessen’s argued in his March 15 Washington Post column that “We need to take the words of our enemies seriously.” As he correctly pointed out, “Chinese dictator Xi Jinping has been just as clear about his intentions in Taiwan.” As if on cue, the People’s Republic of China’s ambassador to the United States, Qin Gang, published a letter in the same paper, repeating those intentions in the obfuscating, double-speak, and instrumentalist language so closely associated with the Chinese Communist Party (CCP). Qin avoided the slightest acknowledgment of Russia’s singular culpability in the carnage that is currently shocking the world outside of CCP-controlled media and instead took the opportunity to repeat the CCP’s veiled threats against Taiwan. He essentially argued, just as Putin did prior to attacking Ukraine, that Taiwan is not a real country and, therefore, by implication, China similarly has the right to use homicidal violence to have its way with Taiwan. Charles Lane’s piece in the Post provided important context for how Qin’s letter, by tying principles of “sovereignty” and “territorial integrity” so closely to formalistic and legalistic “international recognition” is actually part of the CCP’s long-term preemptive justification for attacking its neighbor, Taiwan.

Paradoxically — and worryingly — [the fact that Ukraine’s UN status delegitimizes the Russian attack] might also vindicate Chinese diplomacy, which has tried for decades to deny international recognition to the most likely next target of aggression: Taiwan.

Taiwan has never been under the jurisdiction or control of the CCP’s state project, the People’s Republic of China (PRC). Moreover, Taiwan is a thriving, independent (in the plain English sense of the word), liberal-democratic, rule-of-law abiding, economically flourishing, and creative society that has shown itself far more capable of managing both its domestic and international affairs than its gargantuan neighbor, the PRC. Make no mistake about it, the horrors we are witnessing in Ukraine will pale next to the violence the CCP will unleash on Taiwan to achieve the CCP’s “China Dream”—which its leaders relentlessly refer to as uniting the “same race and same civilization (同文同种)” under the sacred “Fatherland (祖国).” Post-Soviet Russia has no equivalent of either the Tiananmen Massacre or the long-term, big-data-driven alternate reality of CCP-controlled media, which makes Russia’s attempts to control the narrative among the Russian population look like utter child’s play.

Qin’s letter on March 15 was just the latest in a decades-long CCP campaign to establish a legitimizing pretext for an armed attack against neighboring Taiwan. The PRC bolsters its preferred framing of what it calls the “Taiwan problem” within a highly legalistic reading of the constitutive theory of international relations according to which a state exists if other states recognize it. As a correlative, the PRC ignores the declarative theory of international law under which a state exists as an international legal person if it possesses a defined territory, a permanent population, a government, and the capacity to enter into relations with other states. Under the declarative theory, Taiwan much more easily meets the elements of statehood than many other widely recognized states. Taiwan’s constitutional liberal-democratic government of exercises indisputable sovereign authority over a well-defined territory and is the recognized government of about 24 million people. It conducts sophisticated diplomacy through “representative offices” and “embassies” throughout the world. The fact that Taiwan is de facto recognized as a state separate from the PRC by almost all the free countries of the world has contorted the PRC into an odd position. The PRC argues that only states that recognize Taipei and not Beijing as the legitimate governing authority over all of China, a rather absurd position in 2022, should count as “recognition” partners for purposes of determining if Taiwan is an independent state. It sounds absurd, but the purpose of the PRC’s position is not to reflect law or truth but to set up a pretext for murder.

Importantly, the CCP has been engaged in highly technical and legalistic arguments to preemptively justify what will amount to the mass murder of innocent men, women, and children who are used to living in a highly complex, stable, and free society. As sinologists, linguists, a legal scholar trained in international law, an American and Taiwanese citizen, as well as public servants involved in teaching the next generation of Americans, we constantly think about the right language to frame issues surrounding China and Taiwan in order to make the conversations most substantive and productive. Post-modern scholars refer to how words build our understanding of the world as discursive construction. Qin Gang’s clunky doublespeak, such as referring both to the importance of territorial integrity and sovereignty but then declining to criticize Russia is all part of a deliberate discourse that frames domestic and international events to legitimize the CCP’s atrocities. Destruction of Hong Kong civil society and rule of law is framed as “creating conditions for peaceful development,” incarcerating hundreds of thousands of Uighur Muslims in concentration camps in Xinjiang without due process is framed as education, murdering student protesters on Tiananmen is framed as restoring public order, or just denied entirely.

As a preliminary matter, what scholars have called the U.S. position of strategic ambiguity vis-à-vis defense of Taiwan does not wholly reflect U.S. practice towards recognition of Taiwan as a state. Rather it is a pragmatic position that was intended to discourage both the CCP and Taiwan’s government from acting imprudently vis-à-vis one another since it remained ambiguous whether the United States would come to Taiwan’s defense in the event of a CCP attack. Notwithstanding Qin’s disingenuous insinuation that there is any kind of international consensus on the CCP’s “One China Principle,” the United States’ equally ambiguous “One China Policy” has doggedly declined to affirm that Taiwan has ever been a part of the CCP-controlled PRC.

Discourse is inseparable from history, and particular discursive models develop in response to contingent circumstances. Nowhere is this more apparent than China’s insistence on the “Taiwan-as-the-only-China” requirement for recognition of Taiwan to count. Under the present circumstances, whenever anyone refers to “formal recognition of Taiwan,” they are operating with the PRC’s preferred and highly fictitious paradigm. Whether intentionally or not, if a country recognizes Taiwan as China, then said country engages in the fiction that the “People’s Republic” of China is not China.

For the first half of the twentieth century, countries more or less recognized Taiwan as part of the sovereign territory of the Empire of Japan. After the United States defeated the Japanese Imperial Government in 1945, Taiwan’s status was left undetermined. At the time, Chiang Kai-Shek’s (CKS) ailing Republic of China (ROC), a more or less one-party dictatorship ruled by CKS and his Kuomintang (KMT) “Nationalist” Party, was in the final stages of losing the Chinese Civil War to the CCP. Between 1947 and 1952, CKS and his KMT fled to Taiwan with the remnants of the ROC government after losing the Chinese Civil War to Mao Zedong’s Communist Party, which established the CCP’s “People’s Republic” of China. Even though CKS had lost effective control over the entire territory of “mainland China,” he still claimed that his KMT-controlled ROC government was the sole legitimate government of all of China and that his “retreat” to Taiwan was only “temporary.” Until the 1970s, the United States and other liberal-democratic states continued to recognize CKS’ ROC government in Taiwan as the actual government of “all of China,” maintaining the fiction that the CCP’s “PRC” was not actually exercising effective sovereign authority over China which, of course, it was. Under this fiction, both Taiwan itself and the rest of the “free world” referred to Taiwan as China or even “Free China.” Pursuant to this “Taiwan-as-the-only China” model, if a state recognized the “ROC” (by this time, only existing in and administering the territory we associate with Taiwan), such a state ipso facto could not recognize the “PRC” because both the ROC and the PRC claimed that it alone represented all of China.

Of course, hardly anybody in Taiwan or China today sincerely contends that the Taipei ROC government has a legitimate legal claim to all of China. Taiwan’s current ruling party, the Democratic Progressive Party (DPP), the leader of the “Green Camp” of parties traditionally associated with “Taiwanese independence,” certainly does not believe that Taiwan is part of China. In fact, in her speeches, President Tsai Ing-wen often refers to China as “China (中國 chung kuo)” and Taiwan as “Taiwan (台灣 t’ai wan).” The fact that the de jure constitutional description of the ROC state as the China is so at odds with the popular conception of Taiwan among Taiwanese citizens—when Taiwan is a true, functioning liberal democracy perfectly capable of amending the ROC Constitution—is related to domestic politics and fear of how China might respond (remember, China demands that Taipei claim that it, not Beijing, represents all of China).

A significant part of Taiwan’s electorate is part of the KMT-associated “Blue Camp,” and for different reasons, including fear of the PRC, personal identity as “Chinese,” nostalgia, or hopes that one day the ROC could actually make China a liberal-democratic republic, as well as political opportunism. Even though most entertain no realistic aspiration that Taiwan represents all of China, many still bristle at the thought of removing the KMT from the center of the formal ROC legal and historical narratives. Suppose the de jure conception of the country changed. In that case, these Blue Camp supporters know it could fuel debates about the name of the ROC (to remove the word China) as well as the national anthem, emblems, and flag, all of which still explicitly reference CKS’s Nationalist Party, despite its recent electoral failures. There is also an obvious international aspect to this that causes Taiwan’s freely elected government to move cautiously about changing those China-oriented state symbols, namely that their covetous neighbor, the PRC, will claim that any such move reflects a move towards “Taiwanese independence.” This is ironic since Taiwan, whatever one wants to call it, has never been dependent on the PRC, and since at least 1950 has been an entirely self-governing, independent state.