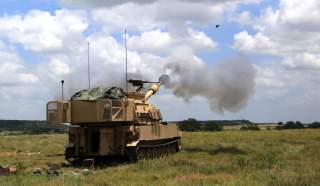 Over the last quarter century, Washington's primary tool for divesting infrastructure the armed forces no longer needs has been the Base Realignment and Closure (BRAC) process. But the Pentagon needs better tools if it is to manage its massive global footprint efficiently.

Throughout this summer of serial chaos, American interests have suffered setbacks on every critical front from Asia to the Middle East. The silver lining is that these harrowing challenges have helped most members of Congress see that it makes no sense to take a "peace dividend" when there is no peace. As a result, lawmakers in 2016 are likely to abandon the current cycle of ever-constricting defense budgets, which has demonstrably cut the capacity and capability of our armed forces.

That said, it is unlikely that defense budgets will rise quickly and sharply. To recover from the damage done and provide the force needed to handle the missions likely to be given them, the Pentagon will have to look hard for ways to get more bang for its buck. Managing the military's global infrastructure must be part of the mix.

The Pentagon's 200+ golf courses are only a tiny fraction of the 29 million acres of land and hundreds of thousands of buildings managed by the Department of Defense (DOD). In addition to facilities in the United States, the armed forces have a global footprint to get troops where they need to be to safeguard the nation's interests. For example, DOD maintains more than eighty installations and bases in Japan and more than one hundred in Italy.

Global companies, like DHL, with corporate facilities in hundreds of countries and territories, recognize that managing infrastructure is a core competency for ensuring the efficiency and effectiveness of their operations. They fret constantly over the state of their global footprint. DOD should do no less.

This is no revolutionary concept. The DOD has been trying to shed infrastructure since the end of the Second World War. McNamara's "whiz kids" made it a priority when they ran the Pentagon. Since the fall of the Berlin Wall, there have been five rounds of BRAC. In 1988, DOD shuttered sixteen major bases. In 1991, twenty-six got the axe. In 1993, the Pentagon ordered twenty-nine major closures. In 1995, twenty-seven more went by the wayside. In 2005, thirty-three additional bases got red-lined. At the same time, the armed forces realigned (moved facilities and personnel among) fifty-five other major bases and 234 minor facilities.

Overseas, the U.S. military presence has also shifted dramatically. Today, around 67,000 military personnel serve in twenty-eight main operating bases in Europe. That's a fraction of the footprint that was in place during the Cold War. The presence in South Korea is also smaller. On the other hand, the buildup of the U.S. military base on Guam is dramatic. The U.S. infrastructure in Iraq and Afghanistan swelled after 9/11. Both have been massively scaled back.

It has never been easy to match footprints to needs. America's global commitments keep evolving. Military budgets have waxed and waned. Technology and logistics and business practices change. The needs of the different services have to be taken into account. And politics—both at home and overseas—always matter.

In the United States (and overseas territories), BRAC was supposed to overcome all these challenges, particularly the politics. Guided by the Defense Base Closure and Realignment Act of 1990 (amended by the FY ‘05 Authorization Act), on paper it’s a simple, four-step process. One: the Pentagon comes up with a list of recommended BRAC actions. Two: an independent commission reviews the list and recommends changes to the president. Three: the White House sends a final list to Congress. Four: Congress votes up or down on the final list—all or nothing.

Reality is messier than one-two-three-four. There are lots of politics and lobbying every step of the way. In the short term, closing bases and transferring operations and infrastructure can be more costly than the short-term savings of consolidation.

If Congress and the Pentagon want to try this again—and do a better job than before—they may need a better law. The authority for BRAC has lapsed. When crafting a new BRAC authority, here are five guidelines for Washington to follow.

Learn the right lessons from the last BRAC.

The criteria for determining the "military value" of facilities must be right. For instance, the criteria ought to better account for the mission of military support to civil authorities. This would ensure that the armed forces are prepared to do their appropriate part in responding to regional or national disasters (think Hurricanes Katrina and Sandy) or in supporting vital homeland-security missions.

The process for assessing infrastructure should be open, transparent and inclusive. "Domestic constituents play an important role in the U.S. part of the process because military installations are integrated in local economies," writes Michaela Dodge in a close analysis of past BRAC efforts. "BRACs cause substantial anxiety in the local communities."

The Congressional Research Service concluded, “the research has shown that they [base closures and realignments] generally have not had the dire effects that many communities expected.” Nevertheless, when any jobs are on the line, people get nervous. Further, when thinking through these challenges, it’s worth remembering that no one has a monopoly on good ideas. Folks ought to be heard. The best way to manage the process is not to try to hide or obfuscate the politics, opinions and options, but to embrace open and effective engagement.

Further, the U.S. government has to get "real" about being green. "The Pentagon," Dodge notes, "must include costs of environmental cleanup and restoration if it decides to close facilities in the United States." Sometimes these costs can wipe out estimated savings from shuttering facilities. "While the Pentagon should contribute to restoring the land it used," Dodge concludes, "the Department of Defense should not have to accommodate excessive demands on the land and facilities it is required to close down."

The United States is a global power with global responsibilities. It must take a holistic view of its infrastructure needs. Defense facilities at home and overseas should fit cohesively together. What the future American basing structure in Europe looks like ought to be just as important as how many bases the DOD keeps in Texas. DOD should have an infrastructure management mechanism that seamlessly addresses both, rather than decide overseas and domestic basing needs through separate stovepipes.

The purpose of having bases and facilities is to protect America's interests now and into the future. The first goal of any process should be to match capabilities and capacity to mission needs.

Past BRACs had it backwards. The first question they asked was whether or not to shutter a base. A better place to start would be to look at how the Pentagon can trim the massive overhead currently required to manage the enterprise. Authorities and responsibilities for managing defense infrastructure are widely dispersed among the DOD bureaucracy and the individual services. Streamlining/rationalizing the byzantine management structure would be a huge first step in getting future infrastructure costs down.

Instead of just debating the rules for another round of BRAC, Congress and the Pentagon ought to forge a dynamic management process that continually reviews and updates the enterprise. This partnership should focus just as much attention on reviewing long-term defense needs and investments as on cutting a base to save a dollar.

Americans don't want the world's cheapest military. They want a military that can defend their interests and deliver a dollar of capability for a dollar invested. That's the standard our government should aim to achieve.

James Jay Carafano is a vice president of The Heritage Foundation, where he directs the think tank’s research on defense and foreign policy. You can follow him on Twitter: @JJCarafano.