Getting Real About Refugees and Public Health 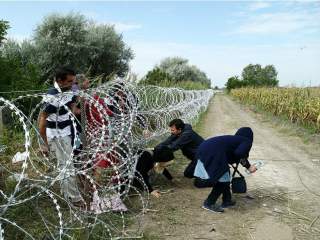 They came. They saw. They left.

Leaders convened in Brussels earlier this week to discuss how to move forward in earnest with the EU-Turkey Joint Action Plan on refugees. The informal summit was certainly much ado about nothing. They proposed twelve goals, none of them new nor unexpected. EU officials placed emphasis on how to manage irregular migrants—or migrants seeking economic well-being as opposed to seeking asylum based on conflict—but gave little attention to how Turkey and the EU will actually manage the safety and security of existing and forthcoming refugees into Turkey. And that presents a big problem.

For example, the risk caused by not introducing mandatory infectious disease screening to refugees, whose health services have been disrupted since 2011, borders on negligence. Yet in Europe, the attention that has been directed towards mandatory infectious disease screening has been co-opted by the predominantly anti-refugee political parties. For now, the EU and Turkey have been focusing on resettlement as well as the need for maintaining border controls, with some passing references to matriculating children into schools in their respective host nations. It remains unclear, however, how Europe and Turkey will continue to manage the public health risks to refugees who have gone with little to no health services since war broke out in Syria five years ago.

Prior to Monday’s meeting, European Council President Donald Tusk traveled to central and eastern Europe to garner consensus on migration in a politically charged environment. Tusk’s three-pronged agenda included: (1) Prohibiting countries from championing a “wave-through” policy of migrants, and rather recommitting to Europe’s common rules and decisions, including the Schengen Borders Code; (2) a rather nebulous confirmation of Turkey’s commitment to “take back” migrants leaving Turkey for mainland Europe in exchange for future just rewards; and (3) more talk about providing humanitarian assistance to Greece and the proposal of a new Emergency Assistance instrument of 700 million euros, to compensate or incentivize the initiative of national governments in these humanitarian efforts.

It is unclear from the meeting earlier this week how Turkey will implement the joint plan of action. Major challenges remain. There have been incidents of Syrian Kurds that have sought refuge in Turkey have been victim to anti-Kurdish violence at the hands of Turks. Europe, too, has yet to articulate how the safety and security of Syrian refugees will be upheld.

Many Turkish Kurds switched political allegiance away from Erdoğan’s AKP party following Turkey’s unwillingness to aid Kobani, a Syrian Kurdish city, beset by ISIS in 2014. Ironically, should anti-refugee Turks take up the mantle of hatred and violence against Syrian Kurds, they will find they are no different from the Europeans whose xenophobic violence against Turks permeated Europe in the late 1990s and the early 2000s. To the extent that the successive waves of Syrians are vulnerable to vaccine-preventable diseases against which they have not received immunization due to the war, there is a very real possibility that Syrian Kurds and non-Kurds could be victims of further and more widespread violence. And since the recent bombings against military assets in Ankara have been blamed on both ISIS and the PKK, a faction of Kurdish separatists that the government deems a terrorist organization, there is increasing concern for Kurdish refugees.

So what can Turkey do, not just say, to appease concerns for the well-being of Syrian refugees, Kurds and non-Kurds alike? It’s in both Turkey and Europe’s interest to agree on mandatory infectious disease screening in the short term, and chronic migrant health concerns in the medium-to-long term. This is certainly something that can be agreed upon informally as well as formally.

Scaling up mandatory screening and properly immunizing millions of people is no small feat. Any country would be hard pressed to manage the volume and speed of refugees making their way to Turkey. The United States should be helping. The EU should be less afraid of adding on conditions related to mandatory infectious diseases screening both within its borders and as a stipulation for Turkey to receive funding. Turkey must take the initiative on raising the bar with respect to upholding the safety and security of refugees. The status quo is unacceptable.

Melissa S. Hersh is a risk consultant and Nonresident Fellow at the nonpartisan Stimson Center.