Getting Serious About Russia 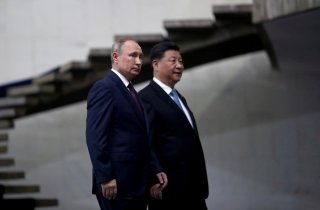 RUSSIA IS a determined adversary of the United States. The Putin government, which has rebuilt the military, believes that Washington is leading a hostile endeavor designed to undermine its international positions and domestic stability. This determination to resist and challenge America is tempered by Moscow’s desire for a more constructive relationship, even partnership, with the United States—as long as it is available on Moscow’s own terms. Russia’s economic limitations, lack of reliable allies, and demographic problems mean that Vladimir Putin and his advisors are acutely aware that the costs of a rivalry with America are high. In contrast to the Soviet Union, Russia has neither the ideology nor the messianic drive that would require inveterate enemies, on the one hand, and the reflexive support of like-minded autocratic regimes, on the other.

Put bluntly, the future of U.S.-Russia relations is largely America’s choice and it will depend on how deftly the Biden administration defines its fundamental interests—either as a hegemonic democratic empire, determined and obliged to formulate and implement the international rules of the game; or as a leading but restrained geopolitical and economic power prepared to define those interests more narrowly that allows other nations, as long as they do not directly challenge America, to live more or less according to their own standards. If the United States cannot settle for anything short of unquestioned hegemony, Russia will indubitably prove a serious impediment, prepared to challenge it.

REGARDLESS OF its intentions, Russia remains an important country for America, and by one essential criterion, the most important county: it is the only nation capable of physically destroying the United States. That would of course end in the destruction of Russia; but history provides abundant examples of leaders who inadvertently created catastrophes such as World War I.

As an economic power, Russia is clearly not in the same league as the United States and China, but its capabilities should not be dismissed. Its economy ranks eleventh in the world in terms of nominal GDP. In terms of purchasing power, which many economists consider to be a more reliable indicator, it ranks sixth—behind only China, the United States, India, Japan, and Germany. And while Russia is known for its excessive dependence on energy exports, its multifarious advances in military technology, space, cyber capabilities, and, most recently, Covid-19 vaccines demonstrate that it is an advanced country—and that is to say nothing about its well-recognized culture and highly educated labor force.

Perhaps even more significant is the Kremlin’s role as a geopolitical balancer in the competition between China and the West. Moscow’s choices are likely to have a major impact on the outcome of this competition. Beijing’s sense that Moscow has its back is likely to embolden China and make it geopolitically more assertive against the United States and its allies.

Since the end of the Cold War, however, the United States has far too often put its analytical brainpower in the geopolitical equivalent of a broom closet—approaching Russia with a combination of polemic and prosecutorial zeal, beguiled by the illusory perception of a new unipolar American era. Policy and opinion makers have adopted a narrative of unprovoked Russian aggression. This narrative presumes that Moscow is committed to undermining democratic governments around the world. Relations with friendly democracies like Israel, India, and Serbia are conveniently ignored.

After Moscow’s failed attempts to become a junior partner to the United States in the 1990s, Russian international conduct became increasingly forthright in the new century under Vladimir Putin’s leadership. When Russia deployed military force, however, it limited its activity to local civil wars, as in Syria, or to post-Soviet territorial disputes immediately outside Russian borders. In 2008 a Georgian attack on Russian peacekeepers in South Ossetia triggered Russian action against Tbilisi. In Ukraine, Putin used what is commonly described as hybrid warfare only after the so-called color revolution of 2014, when Moscow became convinced that the West was trying to incorporate Ukraine in its sphere of influence.

TODAY, TENSE relations have their origins in the policies of both sides. In fact, Russian actions have frequently been heavy-handed and deceptive. Deception toward adversaries forms a constituent part of the Soviet political tradition: in the absence of a meaningful parliament or independent media, no distinction was made between the justified deception of adversaries and across-the-board disinformation. As early as January 1923, the Communist Party Politburo decided to create a special body responsible for disinformation—the so-called Dezinfburo—“for the purpose of systematic work to mislead foreign countries regarding the domestic and foreign policy of the USSR, as well as the capabilities of its armed forces and its efforts in the defense area.” Today, Moscow’s chronic and habitual denials are often more damaging to Russian interests than the actions themselves. Even if its actions have a logical explanation, as in the case of the downed Malaysia Airlines Flight 17—possibly the result of confusing it with a Ukrainian combat aircraft—the Kremlin instead tends to draw international attention to its controversial denials of responsibility.

So what should U.S. objectives be in dealing with Russia? If America makes another attempt at unqualified global hegemony, then Russia will remain a roadblock no matter what—unless, of course, it is defeated militarily or collapses. As the Soviet Union’s own self-inflicted demise demonstrates, such an outcome cannot be precluded, but it would be reckless to make it a practical goal of American foreign policy. Not only would it likely be beyond U.S. capabilities, but it would also risk a civil war in a country with many thousands of nuclear weapons. The pressure that this policy would place on Russia, moreover, would likely provoke a fierce response from Moscow. Russian military doctrine allows for the first use of nuclear weapons if the survival of the state and its armed forces is at stake. Should a conflict erupt in the Baltic States or in eastern Ukraine, any large-scale engagement of NATO forces would likely require the suppression of Russian command and air defense capabilities around Moscow and St. Petersburg. The outcome would not be difficult to imagine. Even short of such a catastrophic scenario, if confrontation deepens, one could easily expect exactly the kind of Russian mischief that the United States already worries about—including interference in U.S. politics, cyberattacks, support for anti-American insurgents worldwide, and hybrid military action against targets in Ukraine and the Baltic States—all on a much larger scale than today.

The common expectation that NATO’s increased presence in the Baltic region can serve as a Cold War-style tripwire is unpersuasive and risky. A tripwire was designed to deter an unprovoked Soviet invasion against West Berlin. It was never intended to serve as cover for a global campaign to isolate and weaken the USSR, nor was it intended to place military forces in close proximity to Moscow and St. Petersburg as they would be in Estonia and Eastern Ukraine.

If the United States chooses to act assertively in pursuit of its fundamental interests but with restraint when such interests are not at stake, it could contain any potential Russian aggression. Washington can establish a climate that allows for limited partnership: first and foremost, to avoid a military conflict, and second, to avoid pushing Russia into China’s arms. Such a strategy of assertive restraint would include strengthening U.S military capabilities and pushing allies to contribute more for their self-defense. It would also incorporate a clear message to the Kremlin that Article 5, NATO’s collective defense clause, is, as President Joe Biden recently said, “sacred”—but with one important safeguard. The article was meant to deter unprovoked aggression rather than to serve as a protective shield for small Russian neighbors with long-standing grievances to gain leverage over Moscow, at U.S. risk and expense.

Sanctions in some circumstances are a useful instrument, provided they are not supposed simply to isolate and weaken Russia, but to induce more flexible Russian behavior. Russia would clearly like to see sanctions lifted, or at least to receive meaningful relief. It cannot and should not expect that this relief would come without genuine reciprocity from Moscow. For this approach to work, however, Moscow cannot be expected to make major concessions, in the idle hope that Western reciprocity would come later down the road. This scenario is similar to what occurred during the Gorbachev era. To insist that Moscow repeat what many Russians view as a failed and demeaning approach would be to confuse the desirable with the possible.

With a modicum of toughness and pragmatism, however, it very well may be possible to develop a formula whereby the Donbas can return to Ukraine in exchange for an easement of sanctions, meaningful autonomy for the region, and a deferment of NATO membership (which is not in the cards in the foreseeable future, anyway). The alternative might be an uncertain continuation of the current unstable status quo or—even worse, should it collapse—the incorporation of the Donbas into Russia, an escalation of the conflict, and, as Mikheil Saakashvili has predicted, the establishment of a Russian “land bridge” to water-starved Crimea, which would create turmoil in Ukraine and dramatically increase the level of confrontation with the West.