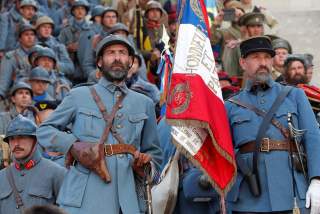 ON NOVEMBER 11, Europe will mark the 100th anniversary of the end of World War I. Though it has been overshadowed by World War II in popular memory, the Great War, as it was known, signified a turning point for Europe and America in the past century. Whether they sleepwalked into the cataclysm or actively sought it out, the monarchs of Europe inadvertently ushered in a new age of great power conflict that defied contemporary liberal predictions that growing interdependence would avert a renewed threat of war. To look back at the war is to realize that it has as much to say about the present as the past. What happened once could happen again.

It would be difficult to think of a more catastrophic moment for the West, which has never fully recovered from the conflict. On its eve, the British journalist Norman Angell had published a bestselling book called The Great Illusion that declared that a European war was unthinkable. Free trade, as the nineteenth-century liberals William Cobden and John Bright had argued, would help to ensure that nations cooperated with each other and shunned armed hostilities as inimical to prosperity. A war, by contrast, would mean, as Angell wrote, that “the incentive to produce would be sapped and the conquered area be rendered worthless. Thus, the conquering power had to leave property in the hands of the local population while incurring the costs of conquest and occupation.” Instead, nations should submit their grievances to be arbitrated by a world court. Interdependence and globalization would ensure an irenic future.

It never happened. Instead, the guns of August created a protracted bloodbath that ended up toppling, one after another, the monarchies of the continent. The Romanovs were assassinated. Kaiser Wilhelm II fled to Holland, where he lived at Huis Doorn. The Austrian Emperor Franz Joseph Karl and his consort Zita were exiled to Funchal, Madeira. While England’s monarchy emerged intact, its imperial aspirations did not.

No sooner had hostilities ended than a new battle began over the Kriegsschuldfrage, or war guilt question. It seemed inconceivable that such a calamity could have originated solely from the assassination of an Austrian archduke and his morganatic wife in Sarajevo. After the conflict ended, the victors pinned the blame on Germany, codifying its culpability in Article 231 of the 1919 Treaty of Versailles. British Prime Minister David Lloyd George had said he wanted to squeeze Germany “until the pips squeak.” But by the 1920s, the Western allies began to feel guilty about the Treaty of Versailles’ war guilt clause and onerous reparations, which the economist John Maynard Keynes called a Carthaginian Peace. He had a point. The treaty permitted the Germans to view themselves as victims, stirring up a resentful nationalism that helped bring Hitler to power. None other than Lloyd George became an advocate of appeasement toward the Nazi regime and endorsed a no-fault theory of the war. He said that Europe had simply “slithered over the brink into the boiling cauldron of war.” Meanwhile, in an America that was reverting to isolationism, Senator Gerald Nye conducted hearings of munitions manufacturers and declared that “merchants of death” had propelled America into war. The critic and essayist Harold Stearns expressed his despair over the war’s results in a book called Liberalism in America in which he charged that his contemporaries had exhibited the “technique of liberal failure…whereby one hopes to control events by abandoning oneself to them.”

IN SHORT, President Woodrow Wilson’s promised war to end all wars—his crusade for democracy abroad—had boomeranged. In 1919, Wilson pleaded for American entry into League of Nations. His intransigent refusal to compromise on the terms meant that he was ultimately outmaneuvered by the crafty Senator Henry Cabot Lodge, who headed a faction called the irreconcilables. This faction focused on Article 10 of the treaty, which contained a sweeping provision—the defense of a member that had experienced external aggression. Lodge said that Article 10 was intolerable because it would subordinate the American military to an international organization, a nonstarter for him and other mossback Republicans. He was also opposed to further immigration:

No one has done more to reopen the fundamental debate over the course of American foreign policy and national interests than Donald Trump. Trump has lashed into nato allies about their military contributions, withdrawn from the United Nations Human Rights Council and sought to impose restrictions on immigration. He has also withdrawn from the Iran nuclear deal, the negotiations over the Trans-Pacific Partnership treaty and the Paris Agreement on global climate change. To the surprise of many of his detractors, he has indeed fulfilled many of the promises that he made during the 2016 campaign.

And he shows no sign of changing. As his recent appearance at the United Nations in September indicated, Donald Trump continues to emphasize the older, Republican traditions that were espoused by Lodge and others. At the un, Trump declared that he would elevate American sovereignty over any international institutions:

We will never surrender America’s sovereignty to an unelected, unaccountable global bureaucracy. America will always choose independence and cooperation over global governance, control, and domination. I honor the right of every nation in this room to pursue its own customs, beliefs, and traditions. The United States will not tell you how to live or work or worship. We only ask that you honor our sovereignty in return.

Yet Trump’s jabs at Iran and Venezuela belied his self-professed wish not to interfere in the internal affairs, as the old Soviet phrase had it, of other countries. But his general course does represent a repudiation of the belief in globalization that took flowered after 1945 and blossomed after 1989. With the fall of the Berlin Wall, it looked as though the liberal vision of progress had won, fulfilling the hope expressed by Lord Tennyson in his poem Locksley Hall:

Till the war-drum throbb’d no longer, and the battle-flags were furl’d/ In the Parliament of man, the Federation of the world./There the common sense of most shall hold a fretful realm in awe,/And the kindly earth shall slumber, lapt in universal law.

Indeed, in his famous essay “The End of History?,” which appeared in The National Interest in the fall of 1989, Francis Fukuyama exhumed the belief that it was economics, and economics alone, that really mattered; it was clear, he suggested, that there would be “no struggle or conflict over ‘large’ issues and consequently no need for generals or statesmen; what remains is primarily economic activity.” Others agreed. In the Lexus and the Olive Tree, for example, New York Times columnist Thomas Friedman echoed Marx’s claim in the Communist Manifesto that a “universal interdependence” was replacing parochial national sentiments. Friedman, among other things, touted his “Golden Arches Theory of Conflict Prevention,” which held that any two countries with a McDonalds would never go to war, a theory that was later disproven by the sanguinary conflict between Serbia and Bosnia, both of which boasted the golden arches. Friedman depicted globalization as an unstoppable force:

THIS WAS too pat. In his dystopian novel 1984 George Orwell had already rebuked the notion that history could only consist of a steady march of progress: “The world of today is a bare, hungry, dilapidated place compared with the world that existed before 1914... As a whole the world is more primitive today than it was fifty years ago.” In his essay on the return of anarchy abroad in this issue, a probing reexamination of his celebrated article “The Coming Anarchy” in the Atlantic, Robert D. Kaplan notes that Fukuyama’s was “an extremely American- and Euro-centric vision, taking insufficient account of what was going on beyond the West. And it did not comport with what I was witnessing in Africa, the Middle East and Asia.” At the same time, the rise in nationalism in Europe, Asia and the United States has put paid to the optimism of those who prognosticated the inevitable triumph of liberal democracy. Hungary and Poland are reverting to authoritarianism. Britain is intent on Brexit. And both Russia and China increasingly view themselves as adversaries of the United States—and are, in turn, being viewed similarly by Washington. The National Security Strategy document released earlier this year by the Trump administration maintains that terrorism is no longer the biggest threat to the United States. Instead, it emphasizes great power conflict between America, Russia and China. When he addressed the Center for the National Interest this past July, Defense Secretary James N. Mattis thus stated, “America is emerging from a period of strategic atrophy. While terrorism’s clear and present danger remains a significant security challenge, we recognize that great power competition, not terrorism, is now the primary challenge to our national security.”