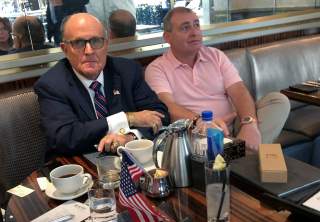 Two American citizens, Ukrainian-born Lev Parnas and the Belarusian-born Igor Fruman, have been arrested on charges of major campaign finance violations. The pair, who were arrested last evening along with two other associates, have intimate connections to Rudy Giuliani, President Donald Trump’s personal lawyer, and served as intermediaries between Giuliani and the Ukrainian government. They were expected to provide depositions before Congress this week. They were also caught trying to flee the country.

According to the indictment, Parnas, Fruman, David Correia, and Andrey Kukushkin “conspired to circumvent the federal laws against foreign influence by engaging in a scheme to funnel foreign money to candidates for federal and state office so that the defendants could buy potential influence with candidates, campaigns, and the candidates’ governments.”

In March 2018, Parnas and Fruman created a limited liability corporation called Global Energy Producers (GEP), a liquified natural gas import-export business based in Florida. The indictment alleges that GEP was a shell company, with Parnas and Fruman listing political donations as coming from the company instead of unknown third parties, including at least one Ukrainian government official who is unnamed in the document. At the time of the donations, GEP had not yet engaged in the energy field, had no income, and no assets.

“On one hand it’s a little eye-opening how folks, seemingly easily, have an avenue like this to get foreign money into U.S. election,” said Ben Freeman, Director of the Foreign Influence Transparency Initiative. “On the other hand, what a lot of folks I don’t think realize is there’s just so many avenues for foreign money to get into U.S. elections right now. I really think this is just the tip of the iceberg. This is just one example we happen to find.”

Parnas’ and Furman’s donations include $325,000 to a pro-Trump SuperPAC, $15,000 to a second SuperPAC, at least $20,000 to Rep. Pete Sessions (R-TX), thousands more to House Minority Leader Kevin McCarthy (R-CA), and even more donations to the Republican National Committee and many state Republican parties. Legally, all donated money will have to be returned.

According to the indictment, “the defendants concealed the scheme from the candidates, campaigns, federal regulators, and the public.”

While ignorant of the money’s source, their large donations did allow Parnas and Furman the ability to meet with both President Donald Trump and his son, Donald Trump Jr. Their primary congressional recipient, Sessions (who lost his reelection bid), penned a letter last spring criticizing Marie Yovanovitch, who was the ambassador to Ukraine at the time. Her removal appears to have been a goal of Parnas, Furman, and their anonymous benefactor.

Trump fired Yovanovitch in May. Both he and Ukrainian President Volodymyr Zelensky criticized her during their July phone call. Yovanovitch is set to testify before the House tomorrow before closed doors.

The New York Times reported two weeks ago that Lev Parnas was a key go-between for Giuliani and the Ukrainian government. This included investigating allegations about the Biden family and 2016 election interference while in Kiev, and connecting Giuliani with Yuriy Lutsenko, who was the Prosecutor General of Ukraine at the time. Their relationship apparently goes back years, with Parnas advising Giuliani on profitable energy deals in Eastern Europe.

The Wall Street Journal reports that both Lev Parnas and Igor Fruman had lunch with Giuliani at the Trump Hotel yesterday, hours before their arrest. In a press conference today, U.S. Attorney Geoffrey Berman said the two men were arrested at Dulles Airport “as they were about to board an international flight with one-way tickets.”

The situation, as it develops, has cast more attention on Giuliani’s work with foreign governments, particularly Ukraine, which goes back at least a decade. Giuliani previously told the Washington Post that any concerns he should be registered under the Foreign Agent Registration Act (FARA) were “diversions by Democrats.”

“By my reading of the statute, it looks like he’s checked all the boxes that would require FARA registration” Freeman said. “He’s working for foreign principles, he’s engaged in political activity here in the U.S., he’s clearly contacting elected officials on behalf of these foreign principles. So basically, across the board, his behavior certainly looks like that of someone who should be registered under the Foreign Agents Registration Act.”

The criminal charges surfacing around Trump are reminiscent of the crimes that surfaced around President Richard Nixon prior to his resignation. In 1971, a group of Cuban-Americans were caught breaking into Daniel Ellsberg’s psychiatrist’s office and the headquarters of the Democratic National Committee. The arrest of those men was the beginning of a criminal unraveling that took down a president. Is the arrest of Parnas and Furman, so closely tied to the Trump’s personal attorney, comparable?