Give Saudi Arabia a Take It or Leave It Deal 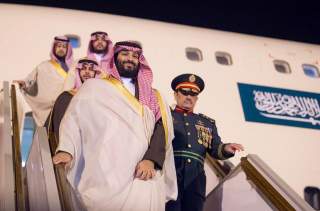 President Donald Trump released a statement on November 20 in which he supported Saudi Arabia’s Crown Prince Mohammed bin Salman’s (MBS) claim that he had nothing to do with the murder of Jamal Khashoggi, directly contradicting a leaked CIA assessment that MBS ordered the killing. Vowing to stand with U.S. ally Saudi Arabia, Trump cited lucrative foreign military sales and Iranian aggression among the reasons for his support. Saudi Arabia’s disastrous war in Yemen has been met with a similar absence of criticism from the administration. However, the United States should do more than wring its hands about this war that has killed thousands and brought many more to the brink of starvation, by applying pressure on Saudi Arabia to change its course. The question is how?

Walking away from supporting the Saudi-led war in Yemen and ending U.S. mid-air refueling might give Washington the moral high ground, but it will do little to stop the killing. The Saudis view the threat in Yemen as crucial to their interests, so U.S. pressure to end the war altogether will fall short of causing real change. To the Saudis, the threat of Iran establishing a foothold on their southern border is much more vital to their interests than procuring U.S. weapons. Rather than walk away from Yemen, they will buy Russian bombs or use less sophisticated weapons and tactics that will kill even more civilians. Americans will have washed our hands of a morally unacceptable situation, but civilian deaths and the threat of famine will actually get worse, and the world will look on and do nothing.

The only approach worse than walking away is what the United States is currently doing—giving the Saudis a blank check. Supporting the Saudis with intelligence, refueling, weaponry and minimal guidance on protecting civilians has failed at preventing civilian casualties. This policy was started by the Obama administration and put on steroids in the age of Trump. The theory was that by remaining engaged and involved, the United States could exercise some influence on Saudi Arabia and drive more responsible targeting and decision-making in Riyadh.

It has not worked out this way. The Saudis continue to conduct the Yemeni war with insufficient regard for civilian lives and are contributing to a worsening humanitarian crisis. Unfortunately, there’s no end to the war in sight. The U.S. administration had made clear there will be no consequences for this behavior when in September it certified to Congress that Saudis are doing everything they can to avoid civilian casualties, despite obvious evidence to the contrary. Moreover, that certification was done despite objections from most of the State Department officials involved in the policy.

Trump’s full support of Saudi Arabia even after the Khashoggi murder highlights why America has been stuck with these terrible policy options in Yemen and why have Washington continued to support this quagmire. American support has not only led to a human catastrophe but also has done nothing to advance U.S. interests. The view inside the U.S. government has been that Saudi Arabia is too important to alienate and the United States does not have the leverage to change its behavior. Saudi Arabia is the largest global producer of oil in the world after the United States, a major investor in the U.S. economy, a purchaser of billions of dollars of weapons, and one of the most powerful countries in the Middle East—a region where all of America’s friends are imperfect. The Saudis know that even if Washington threatened and tried to convince them otherwise, America is unlikely to walk away from them over Yemen.

But even if President Trump is unwilling to put additional pressure on the Kingdom, Saudi Arabia is still facing the real possibility that domestic political pressure in the West will lead other governments to walk away from them. Also, international businesses may curb their investments, and in the U.S. Congress—many members of which disagree with Trump’s support of Saudi Arabia—could put harsh new restrictions on the U.S.-Saudi relationship.  Moreover, many inside the Saudi royal family have balked at MBS’s governing approach and may try to use this moment to sideline him, putting additional pressure on him to find a way out of the current diplomatic crisis that he and the people around him have created.

The United States should use this moment to offer Saudi Arabia a take-it-or-leave-it deal that they may conceivably accept. Rather than suddenly withdrawing U.S. support for the conflict in Yemen, Washington should offer to remain in or even become more engaged but only if the Saudis change their approach entirely and bring the United States into the decisionmaking process. This starts with the Saudis sharing their strategic plans with the United States and taking on board American recommendations for how to shift to a strategy that is more viable and less dependent on airstrikes that harm civilians. Saudi Arabia must also mitigate some of the worst humanitarian impacts. Under closer guidance, the air war will be carried out similarly to how the United States conducted the air war against ISIS in Syria and Iraq. American military personnel will have a seat at the table with their Saudi partners and an ability to veto strikes based on humanitarian or civilian casualty concerns.

In exchange for being made a greater stakeholder, the United States will provide more support and get more engaged. This could potentially even include conducting certain air strikes and putting a limited number of military advisors on the ground. This will further ensure the Saudis meet a much higher standard when it comes to the laws of war.

This approach is not without its tradeoffs. It comes with the real risk of further entangling America in the conflict in Yemen. Washington also has to accept the reality that the U.S. campaign in Iraq and Syria caused significant civilian casualties, and the United States will be blamed for similar casualties in Yemen. However, the approach we recommend and the one the United States has pursued elsewhere is more effective and humane than what the Saudis are doing in Yemen. American involvement could make a meaningful difference.

Americans should also have realistic expectations. The Saudis are likely not to take Washington up on this offer, in which case the United States should suspend military aid and distance itself from the war in Yemen until the Saudis change their minds or take clear steps to end the war. But given the scrutiny they are under, the likelihood of a more flexible approach from the Crown Prince is much higher than it was two months ago.

Even if Saudi Arabia is a key ally in the Middle East, the United States should not give it a blank check of support. America should use the heightened global scrutiny on the Kingdom to take a realistic shot at getting Saudi Arabia to change its behavior in Yemen and save thousands of lives. Such an approach is far wiser than continuing to give the Saudis a blank check or walking away in a fit of moral indignation.

Ilan Goldenberg is the Director of the Middle East Security Program at the Center for a New American Security where Kaleigh Thomas is the Research Assistant for the program.