Gold's Fading Glitter: What the Price Slump Means for the World 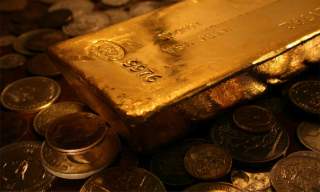 The drop in gold price to five-year lows has battered the yellow metal’s traditional status as a safe haven in times of trouble. With China’s stock market tanking, Europe’s “Grexit” crisis, war raging in the Middle East and massive money printing by central banks sparking inflation worries, why is the world’s alternative currency failing to shine?

Gold “bugs” are being squashed in the price rout, with gold recently plunging to a low of US$1,072.30 an ounce, its lowest level since February 2010. The sell-off compares to its August 2011 high above US$1,900, when analysts were tipping it would climb to US$3,000 by early 2014 on the back of the U.S. Federal Reserve’s record quantitative easing.

Currently, though, analysts are cutting their forecasts amid expectations that the Fed will hike interest rates soon, worsening gold’s investment appeal.

The announcement by China’s central bank of much-lower-than-expected gold reserves has also dampened sentiment, with China and India accounting for nearly half of global gold demand. According to the People’s Bank of China, the nation’s official gold holdings have risen by 600 tons since 2009 to 1,658 tons at the end of June 2015, well short of the 3,000 to 4,000 tons estimated by analysts.

Meanwhile, global mine supply has risen from 2,845 tons in 2011 to 3,129 tons last year, with an estimated oversupply weighing on prices, according to Thomson Reuters.

“The mood is very poor,” Deutsche Bank analyst Grant Sporre told Bloomberg News . “The feeling is that the metals are pricing in rate cuts in the U.S., but I expect that we’ll still see a further leg down when the event actually occurs.”

Macquarie’s analysts have cut their 2016 average gold forecast to US$1,163, warning that the worst may not be over.

“Gold has always had a dual nature as a currency and a commodity,” Macquarie said in a research note. “At present, it is not desired in either form.”

Goldman Sachs has tipped a drop below US$1,000 an ounce this year, while ABN Amro expects the price to fall to US$800 by 2016. Deutsche Bank has gone even further, stating that gold needs to drop another 30 percent to as low as US$750 to reach “fair value.”

The gold gloom has seen investors rush for the exits, selling gold-backed funds at the fastest rate in four months. According to Bloomberg, holdings in exchange-traded products have dropped to their lowest level since 2009.

The plunging price has also hit miners hard, making an estimated 10 percent of all production uneconomic and putting profits at one third of producers under threat. According to Thomson Reuters, three quarters of producing miners are in the red at a price of US$1,100 an ounce, with miners hit by having significant amounts of production hedged at relatively low prices.

“We estimate that nearly 40 percent of project production capability is uneconomic at current prices,” he added.

Billionaire investor Warren Buffett has long held a disliking for gold, describing it in 2012 as an “unproductive asset.”

Others have decried gold’s failure to rally, despite rising geopolitical tensions and economic worries, which normally would spur demand.

However, amid the general gloom, the longer-term outlook may be brighter for the precious metal, according to ANZ Research.

In a March 2015 report entitled “East to El Dorado: Asia and the future of gold,” the Australian bank’s analysts forecast the gold price will climb to above US$2,000 an ounce by 2025, on the back of Asia’s forecast rise to represent over half the global economy by 2050.

“China and India are already the world’s largest gold consumers and incomes still have a long way to rise before reaching developed-world levels,” ANZ said. With average gold demand in Asia’s emerging economies still only half the level of that in developed economies, the analysts expect a doubling of demand from both retail and institutional buyers.

Asian central banks are expected to increase their gold holdings, with Beijing in particular keen to see the yuan gain a greater role in international trading as reflective of its economic stature. Russia has also reportedly tripled its gold holdings since 2005, although reportedly due to its “distaste for the American dollar.”

Meanwhile, gold supply is expected to support ANZ’s price expectations, with miners unable to rapidly expand production. Despite being mined at a “record pace” recently, production has only grown from 2,500 tons in 2005 to around 3,000 tons in 2013, led by China and Australia.

Adding to the bright outlook is gold’s continued role as both “an investment and a defensive asset,” the bank’s analysts say.

“Gold is a store of wealth in unstable times, and while the global financial system has successfully weathered a major storm in the past decade, the future is far from certain,” ANZ said.

Buffett might hate it, but in the long run, the gold bugs might still have reasons to smile.