Good Riddance to Castro and a Failed U.S. Foreign Policy 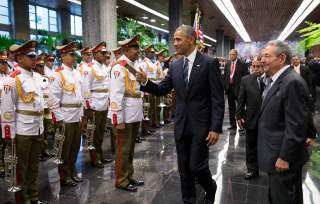 The death of Fidel Castro highlights both a tragic era in Cuban history and a graphic failure of U.S. foreign policy. Some analysts have a problem appreciating the first reality, while others have trouble recognizing the second.

The reactions of world leaders to Castro’s passing ran an extraordinary spectrum of views.  China’s communist government predictably praised him for his contributions to the global “socialist” movement. Russia’s Vladimir Putin expressed condolences and described Castro as a reliable friend of Moscow’s, both during the Soviet era and in the post-Soviet period.

President Obama’s lengthy statement was a textbook example of trying to avoid saying anything that would offend Raul Castro’s government and derail the cautiously improving ties between the United States, yet protect Obama from charges that he was sympathetic to a communist tyrant.

At this time of Fidel Castro’s passing, we extend a hand of friendship to the Cuban people. We know that this moment fills Cubans - in Cuba and in the United States - with powerful emotions, recalling the countless ways in which Fidel Castro altered the course of individual lives, families, and of the Cuban nation. History will record and judge the enormous impact of this singular figure on the people and world around him.

For nearly six decades, the relationship between the United States and Cuba was marked by discord and profound political disagreements. During my presidency, we have worked hard to put the past behind us, pursuing a future in which the relationship between our two countries is defined not by our differences but by the many things that we share as neighbors and friends - bonds of family, culture, commerce, and common humanity. This engagement includes the contributions of Cuban Americans, who have done so much for our country and who care deeply about their loved ones in Cuba.

Today, we offer condolences to Fidel Castro's family, and our thoughts and prayers are with the Cuban people. In the days ahead, they will recall the past and also look to the future. As they do, the Cuban people must know that they have a friend and partner in the United States of America.

But Obama’s statement was an example of brutal realism compared to the naïve tribute that Canadian Prime Minister Justin Trudeau expressed. Trudeau praised Castro as a “remarkable leader” who greatly improved Cuba’s health care and educational systems. That would have been a myopic comment coming from an ordinary Canadian citizen. Coming from the prime minister, it was utterly inexcusable. Even viewed within its own context, it ignored the fact that the vaunted educational system (which did improve the island’s literacy rate) was simply one cog in a massive system to indoctrinate children in the alleged virtues of Marxism-Leninism. Worse, Trudeau ignored Fidel Castro’s horrid human rights record. Castro was a man who murdered thousands of political dissidents, imprisoned tens of thousands in a tropical gulag, and forced millions to flee their homeland.

The man deserved condemnation for his ruinous rule of Cuba for more than half a century. His policies helped turn his country into a combination of economic basket case and used car museum. Castro’s reign was a brutal autocracy that brought the Cuban people little more than additional decades of misery.  Leftists who romanticize the record of this murderous thug do themselves and history a disservice.

But Fidel Castro’s dictatorship also highlighted one of the great failures of U.S. foreign policy. As soon as Castro’s communist orientation became evident, U.S. officials sought to remove him from power. The methods included the Bay of Pigs invasion fiasco and a series of assassination plots that the CIA orchestrated but were more in line with the handiwork of the Keystone Kops. More lasting efforts included the severing of diplomatic relations and the imposition of a comprehensive economic embargo.

Those measures were imposed at the beginning of the 1960s with the explicit objective of forcing the Castro regime to democratize and with the implicit objective of toppling it.  The policy went on year after year, decade after decade, despite the absence of the slightest evidence that it was achieving either of its objectives.

One could at least make the case for a hardline policy toward Havana during the Cold War when Castro served as a reliable ally of the rival superpower. Indeed, one could have made the case that Washington should have enforced the Monroe Doctrine and removed a Soviet client state in the Western Hemisphere by military force if necessary. President Kennedy received advice to that effect during the Cuban Missile Crisis in 1962, but deemed the option too dangerous.

After the Cold War though, it seemed as though the U.S. policy of isolating Cuba was on autopilot. It served no logical strategic purpose any longer, but there was no willingness to change it and anger the well-placed Cuban-American voting blocs in such states as Florida and New Jersey. It was not until Barack Obama mustered the political courage in late 2014 and early 2015 to risk defying that bloc and cautiously explore a rapprochement with Havana that policy finally began to shift. That move has resulted in the restoration of diplomatic relations, the resumption of air travel between the United States and Cuba, and the establishment of a handful of other commercial connections. But that is about all that can be done through executive orders. More significant steps, especially lifting the comprehensive economic embargo, will require congressional action.

A continuation of the rapprochement is greatly in doubt given the attitude of the incoming Trump administration and the GOP-controlled Congress. Key senators, such as Marco Rubio, the son of Cuban exiles, have vehemently criticized Obama’s Cuba policy. Rubio charges that the administration has provided major benefits while Raul Castro’s government has made no meaningful concessions, either on human rights or democratization.

Some injections of realism are warranted. First, Rubio and others who voice these demands regarding Cuba do not make such demands regarding other autocracies, such as Egypt and Saudi Arabia, which are at least as brutal and undemocratic as the Castro regime. Moreover, Obama merely moved toward establishing a normal relationship, not an alliance as with these other tyrannical governments that appear to pass Rubio’s legitimacy test. Second, abandoning the rapprochement merely returns us to the policy that we had been pursuing without success for more than half a century before Obama decided to make a change. There is no evidence that it would work any better going forward than it did in the past.

Just as people on the political left need to acknowledge Fidel Castro’s record for the blood-soaked atrocity that it was, people on the political right need to admit that the policy they embraced for dealing with Cuba was both ineffectual and cruel. It failed to dislodge the Castro dictatorship while making the lives of ordinary Cubans even more miserable. No rational person should want a repetition.