The GOP and the Kavanaugh Crucible 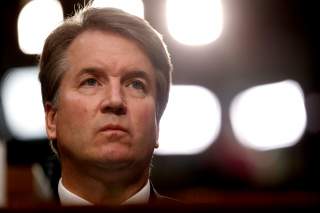 For Republicans dealing with the sexual assault allegations against Supreme Court nominee Brett Kavanaugh, his hearing is becoming increasingly complex to navigate. It looked as though the nomination was starting to steady in the past few days. Then came the conspiracy theory advanced on Thursday in a tweet thread from Ethics and Public Policy Center head Ed Whelan, who is close to Kavanaugh and a former clerk to Justice Scalia, that another man, whom he named, was the likely culprit 36 years ago. This ignited a firestorm of indignation. On Friday morning Whelan backpedaled, stating that he “made an appalling and inexcusable mistake in judgment…”At the same time, President Trump, who has been cautious about commenting, charged into the fray on Friday, alleging that if the attack was “as bad as she says,” then Christine Blasey Ford or her parents would have filed charges at the time. Meanwhile, Ford herself responded to the Senate Judiciary Committee on Thursday afternoon by asking to meet later next week and to negotiate the conditions for her appearance.

What should we make of the mounting brouhaha over Kavanaugh? It would simplify things, though not by much, if the allegations each side is making were decisive one way or the other. If the evidence against Kavanaugh was overwhelming, his nomination could be withdrawn even at this late date and Republicans could try to expedite the confirmation of another nominee (think Amy Coney Barrett). If Ford’s story remained unvetted and cloaked in anonymity, it would be less risky to characterize as an eleventh-hour smear.

Since Ford has filled out the troubling details of her accusation and attached her name to them, they cannot treated so casually. But the evidence against Kavanaugh is still thinner than that presented against the egregious Alabama Republican Senate candidate Roy Moore or many of the first major celebrities ensnared in #MeToo scandals.

That Ford revealed her story in couples therapy six years ago and that there apparently exists a psychologist’s notes corroborating this makes it less likely she invented the charges to derail Kavanaugh’s Supreme Court nomination, though the federal judge’s ascent to the nation’s highest court was reportedly something she was worried about. A successful polygraph examination is also not determinative, but has to be considered as a point in her favor.

At the same time, none of this rises to the level of contemporaneous circumstantial evidence. The first Ford accusation against Kavanaugh appears to have come thirty years later, a time period during which memories can fade. So far the only known witness supports Kavanaugh. And there has yet to emerge anything that establishes this as a pattern of behavior for the Supreme Court nominee.

Neither Ford’s allegations nor Kavanaugh’s denials are wholly implausible on their face. That puts Senate Republicans in a very uncomfortable position. Unless new details buttress the accounts of one side or the other, they can either demoralize their base by abandoning Kavanaugh in the face of unproven charges or they can further alienate women—especially the college-educated female voters living in the suburban districts that will likely decide which party controls Congress next year—by cross-examining Ford and poking holes in her story.

And there are holes, at least based on what has been said publicly. At the same time, this is not a criminal proceeding against Kavanaugh, where the inability to recall precisely where the event took place and various small conflicts would at the very least raise a reasonable doubt. Some of Ford’s fogginess about the details can be explained by the passage of time, the trauma she may have suffered and the absence of any elaborate, premeditated concoction on her part.

Sen. Chuck Grassley, the Iowa Republican who chairs the Senate Judiciary Committee, and his Utah Republican colleague, Sen. Orrin Hatch, remember well the Clarence Thomas/Anita Hill hearings. So does Sen. Dianne Feinstein, the ranking Democrat on that committee. Feinstein was first elected in 1992 as part of the “Year of the Woman” that came about in part as a reaction to Republicans grilling Hill and helping confirm Thomas.

This time, the election is taking place not over a year away but in forty-three days. It’s been another year of the woman in the 2018 Democratic primaries. A much larger number of female Democratic senators are serving to highlight the optics of elderly, white Republican men interrogating a woman in defense of a judicial nominee whose commitment to Roe v. Wade is suspect.

That’s why Republicans first wanted to hold any hearings on Kavanaugh and Ford in private. Democrats, especially those with 2020 presidential ambitions, had already made a spectacle of the regular hearings focusing on mundane topics like constitutional law. These proceedings were regularly interrupted by raucous protesters as it was.

Republicans relented in the face of calls to have Kavanaugh and his accuser testify in public. At this writing, Democrats haven’t accepted even that—they are holding out hopes for an FBI investigation, which would likely take the form of a renewed background check including interviews with Ford and her associates, to delay and possibly deny Kavanaugh’s confirmation.

It is difficult to imagine Democrats will resist the urge to force Republicans to express doubt about Ford’s accusations in a sustained public setting for very long on the assumption that the party of Roy Moore and President Trump doesn’t have the moral or political capital with women to spend in Kavanaugh’s defense.

These hearings will also take place in a more challenging climate than Clarence Thomas faced: there is a growing view, especially on the Left, that because so many women have been abused and then disbelieved in the past there should be a strong presumption in favor of accusers now.

By this reasoning, if Kavanaugh is denied a promotion to the Supreme Court to redress numerous other wrongs, then that is a small price to pay. If Republicans wish to confirm Kavanaugh anyway, liberals are confident that price will be exacted in November instead.