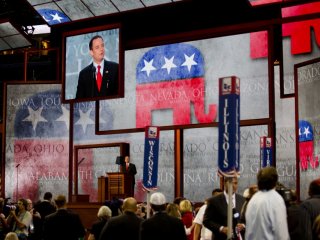 Anyone interested in understanding the emergence of the Donald Trump insurgency within the Republican Party might want to ponder one small reflection of the elitist haughtiness that has spawned the Trump constituency. It is the Republicans’ ill-considered Rule 40(b), enacted at the last Republican convention to set limits on who can qualify to have his or her name placed in nomination at future GOP nominating conventions, beginning with this year’s confab in Cleveland.

Rule 40(b) takes on serious significance in the unfolding GOP nomination drama in the wake of Tuesday’s Republican primary results, with Governor John Kasich winning his home state of Ohio and New York developer Trump dominating the rest of the contests. Kasich’s victory gives him all of Ohio’s sixty-six delegates, which doesn’t do him much good since he lacks any viable path to the nomination. But by denying that delegate cache to Trump, Kasich raised prospects that Trump won’t get a majority of delegates before the start of the GOP’s July nominating convention in Cleveland. On Tuesday, Trump won the crucial winner-take-all state of Florida, knocking that state’s Senator Marco Rubio out of the race and cadging a plentiful ninety-nine delegates. He also won in Illinois (sixty-nine delegates) and North Carolina (seventy-two), which have more complex delegate-distribution rules; Trump will collect a percentage of delegates in those states, though the precise number wasn’t immediately determined. In addition, late into the night Trump was locked in a neck-and-neck fight with Texas Senator Ted Cruz in Missouri (fifty-two delegates).

Had Trump managed to win Ohio’s sixty-six delegates in that state’s winner-take-all contest, he likely would have been unstoppable. He could still get a delegate majority before the convention, but it will be more difficult now. As the Wall Street Journal pointed out in an editorial this week, even if Trump emerges from Tuesday’s contests with something approaching 690 delegates of the 1,237 required for nomination, he would still need nearly 550 delegates to seal the deal. “That could happen,” says the Journal, “but it wouldn’t be easy.” Indeed, as the paper points out, he would have to get about 54 percent of the remaining delegates to win.

It appears that the 2012 GOP nominee, Mitt Romney, contemplating a November victory and a renomination convention four years hence, wanted to ensure that he wouldn’t be undermined by some pesky insurgency candidate—like a Ron Paul gadfly, perhaps, or by the likes of Pat Buchanan’s devastating assault on President George Herbert Walker Bush in 1992. So he got the convention to raise the bar, giving party insiders greater leverage to quash calls for floor demonstrations for splinter candidates and to keep off the convention stage anyone who might not be sufficiently adoring in his attitude toward the chosen one.

Think about it: The man hadn’t even been elected yet, and already he was thinking about how he might stack the deck at the next convention so he wouldn’t have to deal with party dissidents or outsiders. Lost in this calculation was the idea that he would have four years to craft his message, order his priorities, press his issues and generate sufficient success in governance to bring his party together and galvanize his national support. That’s how presidents thrive and get reelected, not by cutting off and shunning party elements deemed to be unwashed. Think Reagan.

Romney’s attitude in this matter was precisely the attitude that has spurred the voter frustration and anger that in turn has boosted Trump’s insurgency candidacy. But this time the insurgency is threatening to take over the party. For all of his unsavory expressions and political bluster, Trump has captured in rhetoric the ennui and anxiety that have festered among large numbers of Republicans, and others, for a decade or more. In doing so, he has placed himself in the position of being the only Republican candidate who can possibly get a majority of delegates before the convention.

But he might not. And then the GOP convention will be thrown into crisis by Rule 40(b). Trump has reached the 40(b) threshold, with nine majority-delegate victories, so his name will be placed in nomination. The only other candidate who has a shot at reaching the threshold is Cruz, who has scored a majority of delegates in five states and who also will enter the convention with a significant number of delegates (according to the New York Times, preliminary post-Tuesday calculations had him at 395, some 226 behind Trump).

So suppose the convention opens with neither Trump nor Cruz with a majority of delegates, but with both hitting the 40(b) threshold. That would mean that only these two men could be placed in nomination, at least on the first ballot. Much has been written about the fact that most delegates will be pledged to particular candidates only on the first ballot, and after that all bets are off.

One can never know what kind of stampede mentality could overtake a convention in such a deadlock crisis. It has been decades since a convention went beyond a single ballot for nomination, and our system has sanctified primary results as a more democratic means of selecting nominees than back-room deals arrived at in convention hotel rooms. Thus, any effort on later ballots to manipulate the system will be intrinsically controversial and perhaps incendiary. The Trump constituency isn’t likely to take such actions with any degree of calmness, and neither are Cruz delegates.

And, in any event, any effort to bring forth fresh candidates will still run up against the eight-state threshold, which could prove a difficult hurdle in the chaos that inevitably would engulf the convention at such a time. A stampede could emerge for a dark horse, but the dark horse would be subjected to considerable animosity among the delegates and within the party.

The party could seek to dilute or eliminate Rule 40(b), but that would take a vote on the convention floor, and neither Trump nor Cruz would have any incentive to accept such a move. Together they certainly would have the votes to block it. All of this points to a raucous convention with plenty of twists and turns, political emotion in abundance, and prospects for lingering intraparty rancor.

Of course none of this political drama may materialize at the convention, but it appears increasingly that the only eventuality that could prevent it would be a Trump delegate-count victory before the convention opens. The billionaire insurgent and his constituency have driven a wedge through the Republican Party, and it’s difficult to see how that wedge can be removed.