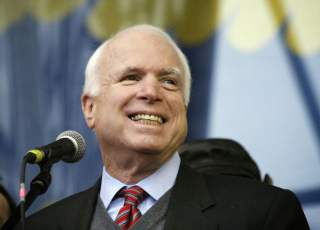 SENATOR JOHN McCain can easily recall the stumble that he believes prompted allies and adversaries alike to question the firmness of American resolve. President Barack Obama planned to launch an offensive military strike against the Syrian regime for crossing his publicly declared “red line” against the use of chemical weapons. Lacking a UN Security Council resolution or even the support of close allies such as Great Britain, however, Obama wanted the backing of Congress. So the president invited his one-time political rival and frequent critic McCain to the Oval Office, along with Senator Lindsey Graham. Together they stand in for a once-reliable constituency of defense and foreign-policy hawks on Capitol Hill, and their active support would be critical in rallying a balky Congress to back military action.

“President Obama said he wanted to accomplish three goals: degrading the capability of the Assad regime, upgrading the position of the Free Syrian Army and changing the momentum on the battlefield against Assad,” McCain told me in a telephone interview. “The president said he would do what was necessary to get that done.” Thus assured, Graham and McCain met with reporters outside the White House and backed Obama’s planned use of military force in the strongest possible terms, setting the stage for the most consequential foreign-policy vote since the 2002 authorization for the Iraq War. “If President Obama is willing to make the case to the American people,” McCain said, then “I’m ready to go to my colleagues in the Congress and say, ‘Now’s the time for us to come together before it’s too late.’”

And yet Congress did not come together. The Congress and the country that the Obama administration and its unlikely allies tried to rally behind forceful action in Syria last year were far different from the vengeful superpower that fixed Saddam Hussein in its crosshairs a decade ago following the 9/11 terrorist attacks. Two of the longest, most costly and most unsatisfying wars in the nation’s history, combined with the Great Recession, had seen to that. An Associated Press poll in September 2013 indicated that a majority of Democrats (53 percent) wanted Congress to reject their own party’s commander in chief in his call for military strikes on Syria. Remarkably, 73 percent of Republicans also wanted Congress to oppose the president’s call to action.

Why did Congress fail to rally behind the president? One obvious reason was that after the fiasco in Iraq and the country’s longest war in Afghanistan, the American public was skittish about another military intervention in the Middle East. Another is that there were few, if any, hawkish Democrats left to buck public opinion. And in the Republican Party, the wings of traditional defense hawks have been clipped by Tea Party legislators. Republican neoconservatives generally supportive of calls for military action have been marginalized within the caucus, not only by controversies surrounding the Iraq War, but also by the electoral defeats of McCain in 2008 and Mitt Romney in 2012, both of whom espoused platforms of aggressive U.S. leadership, peace through military strength and “American exceptionalism.” In an era of hyperpartisanship, it’s also true that fewer and fewer lawmakers can resist the temptation to take a shot at the commander in chief from the opposing party.

As a result of those trends and political currents, Congress appeared ready to reject Obama’s request for authority to use military force last September, with an unlikely coalition of antiwar Democrats and partisan Republicans appearing especially strong in the House. House Minority Leader Nancy Pelosi was forced to argue that Obama really didn’t need congressional approval to use military force after all. Faced with the prospect of acting unilaterally without even the support of a majority in Congress, Obama himself retreated from his own “red line” and accepted a last-minute deal proffered by Moscow.

McCain learned of Obama’s U-turn on the television news. “President Obama informed us of his commitment to act militarily in Syria, and then I had to find out secondhand he revoked that commitment. That had never happened to me before,” said McCain, sounding more disappointed and saddened than angry. Meanwhile, McCain’s own party agreed to take the Pentagon hostage during the fierce budget battles of recent years, then was complicit in shooting the captive with the imposition of across-the-board spending caps known as sequestration. Some Republicans have joined the Democratic Left in railing against the National Security Agency’s surveillance methods and data collection, and out of partisan pique Republicans recently delayed passing a bill to aid Ukraine even as Russian troops were annexing Crimea by force. And Senator Rand Paul rose to prominence in large part based on a thirteen-hour filibuster he gave last year against drone operations, during which he conjured an American dystopia of the future where U.S. presidents target civilians sitting in neighborhood cafes with Hellfire missiles. Since then, McCain has been reduced to pleading futilely for weaponry for Ukraine. It’s a far cry from Iraq, when McCain, together with Graham and former senator Joseph Lieberman, could successfully push a hawkish agenda.

THE FLIGHT of the defense hawks, and the seeds of Washington’s current political dysfunction on issues of foreign and defense policy, can be traced all the way back to the end of the Cold War. The disappearance of the Soviet Union as a monolithic threat sounded the death knell for the foreign-policy consensus behind anti-Communist containment and U.S. global leadership, a consensus that had survived for nearly half a century and defined America’s activist role in the world. Its dissolution left both parties ideologically adrift, but as the party most invested in anti-Communism and a strong defense, Republicans were arguably more lost.

Republican cold warrior George H. W. Bush, the hero of the lopsided victory in the 1991 Gulf War, was thus defeated by a young upstart Democrat named Bill Clinton, who ran on the mantra “It’s the economy, stupid.” In the eyes of many Republicans, Bush 41’s cardinal sin was to break his “no new taxes” pledge, and thus a tax-cutting orthodoxy began to eclipse the solidly prodefense plank of Ronald Reagan’s legacy. Indeed, the “Contract with America” that Republicans used as a blueprint to capture the House in 1994 hardly mentioned foreign or defense policy, other than supporting Reagan’s dreams of a missile shield.

Meanwhile, an American public battered by recession and saddled with the massive debt left by the Reagan-Bush years demanded and got a “peace dividend” that reduced defense spending by roughly 30 percent during the 1990s, making them difficult years for prodefense stalwarts in either party.

Gingrich’s “Republican Revolution” also changed the political dynamic in Washington in important ways. A populist movement that gained much of its momentum from reactions against Clinton’s attempt to establish a national health-care system, it was led by Gingrich, Trent Lott, Dick Armey and Tom DeLay. Part of Gingrich’s genius was to envision ways to demarcate the boundaries of “red” and “blue” America that favored a Republican majority in Congress. He masterfully pushed hot-button issues touching on “God, guns and gays” to appeal to the innate social conservatism of the South and Mountain West. The Republican caucus was, in turn, reshaped by the values and worldviews of those regions, especially as embodied by Christian evangelicals who were a bedrock of the new Republican base.

During that initial post–Cold War period, two strains of thought in foreign and defense policy struggled for supremacy in a Republican Party in opposition. Some leading Republicans like Pat Buchanan embraced an isolationism that traced back to Henry Cabot Lodge and Warren Harding, which culminated in Republican support for the Neutrality Act of 1935, legislation designed to keep the United States out of World War II. Vying for influence with the isolationists were Republican neoconservatives, who embraced a values-based approach to foreign policy which held that America has a special calling to promote the spread of democracy and liberty in the world, and that U.S. military power must be unsurpassed in order that evil empires and nations could be confronted and defeated, not accommodated. Many of the neoconservatives were former Democrats in the vein of Henry “Scoop” Jackson, moderate on social issues but ardently anti-Communist. Disturbed by the sway of the antiwar movement on the Democratic Party in the 1970s and 1980s, these defense hawks migrated to Ronald Reagan’s Republican Party, contributing to their gradual decline in the Democratic Party.

As House Speaker, Gingrich also gathered the reins of power closely to his leadership circle, lessening the influence of committee chairmen, a shift in the balance of power that continued under Democratic leadership. Gingrich abandoned the tradition that seniority would determine committee chairmanships, elevating his chosen candidates to committee chairs ahead of old bulls that had been patiently waiting in line—and accumulating expertise—on their chosen committees.

Perhaps most importantly, because he owed his own ascent to a successful campaign to bring down former House Speaker Jim Wright on ethics charges, Gingrich embodied a hyperpartisan, take-no-prisoners approach to politics that has taken root in the loamy soil of post–Cold War Washington. Many centrists and moderates from both parties who had little stomach for the divisiveness such tactics ensured were driven away from national politics, hollowing out the center of American politics and in some cases depriving Congress of deep expertise on foreign and defense policies, and of its institutional memory.