Is the GOP Still the Party of Donald Trump? 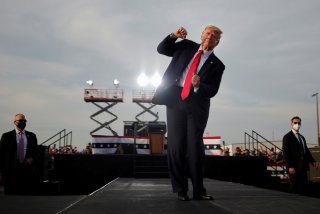 After a tumultuous four years in office, former President Donald Trump quickly fled for Mar-a-Lago Wednesday, and so did much of the stability that existed within the GOP.

Before leaving, Trump launched a blitz of blazing missiles into his Republican Party, wounding its unity and carving several intra-party divisions that left media outlets dubbing it, “a party in crisis.”

The shattering discord uncovered just before the riots on the U.S. Capitol building, committed by Trump’s mob-like supporters, when the GOP’s majority fell flat as a crashing blue wave swamped the White House, the Senate and the House of Representatives, handing Democrats a trio of power until at least the 2022 midterm elections. Trump is the first president since Herbert Hoover to lose all three parts of Capitol Hill in just one term.

Many Republicans blame the former president’s poor handling of the coronavirus, his persistence over a rigged election and harsh rhetoric for the party’s brutal losses, with some lawmakers fearful of the GOP future’s and ability to govern in a post-Trump era.

One bloc of the party—the “‘Trumpers’”—includes the avid loyalists to the former president, who boast “Trumpism” and reject the certification of the 2020 electoral vote. Members of the group have also attempted to kick any House Republican from leadership who voted to impeach Trump for his role in inciting the violence on the Capitol earlier in the month and have been reluctant to condemn the attacks, despite rioters chanting “hang Mike Pence” and threatening to assassinate their fellow colleagues on the Hill.

Potential Republicans in this faction could be Sens. Ted Cruz (Texas) and Josh Hawley (Mo.), as they’ve echoed the former president’s words and push to drive the party to the far-Right.

At the other end of the GOP ideological pole are the “‘Never Trumpers,’” like Sen. Mitt Romney (Utah) and the No. 3 House Republican Liz Cheney (Wyo.) who have distanced themselves from Trump and hope to leave behind the fissures hammered into the party over the last four years.

Ten House Republicans voted to impeach Trump, charging him with “incitement of insurrection,” which “constituted the largest group to ever vote to impeach a president from their own party.” Cheney led the GOP effort to impeach him and is now facing pressure from far-Right lawmakers to resign from leadership due to her disloyalty to the former president.

And in the mix of the party division rest the “‘Kinda Sorta Trumpers’” who balance between supporting the former president, while also paving their own political path.

With all of these opposing factions within the same party, Republican lawmakers and experts anticipate a complicated future in terms of crafting legislation and remaining unified until next year’s election.

“With legislation, two factors are likely to weigh on the GOP in the lead up to 2022. First, how the donor community reacts to the final act of the Trump Administration. Early trends point to some challenges, especially for the GOP House. Risk-averse donors do not want to be affiliated with the pro-Trump faction if more violence occurs,” Dr. Ken E. Mitchell, a professor and chair of the political science and sociology department at Monmouth University, said.

Dozens of U.S. companies announced that they would terminate donations to Republican lawmakers who objected to the certification of the electoral vote, prompting a swirl of uncertainty throughout the GOP over how to govern while also maintaining needed donor funds. And another forty companies have decided to just suspend PAC contributions, an initiative that a number of conservatives labeled as the “reign of terror” and “blacklist.”

Mitchell added, “Second, how the Biden administration performs over the next few months with the virus will set the tone for Congress. Success on this front is apt to translate into momentum on various legislative initiatives.”

Christian Fong, an assistant professor of political science at the University of Michigan, also pivoted to how the “rift could conceivably make House Republicans more willing to cross the aisle and vote with the Democrats”—a potential Democratic tool that could be used to get upcoming legislation passed. Fong noted that if Republicans who sided with the anti-Trump stance, voting to certify the election results and for impeachment, start to see a punishment within their own party, “then those members would have a lot less to lose by bucking the party line and occasionally voting with the Democrats. The Democrats could use their control over the agenda to make it worth the effort.”

“In any case, whether Republicans would be inclined to vote with the Democrats even if there were no pressure from party leadership whatsoever will depend a lot on what kinds of issues the Democrats prioritize and the bargaining posture they take,” Fong added.

But the “‘Kinda Sorta Trumpers’” and the “‘Never Trumpers’” are wary of a political boxing battle ahead, considering Trump said, “We will be back in some form,” upon leaving his position on Wednesday. The former president has also teased a re-election bid in 2024, only if he’s not banned from running for president again as part of the Senate’s conviction of his impeachment trial. Even if he is disqualified, close allies, as well as his children, are prepared to maintain an edge over the Republican Party, since Trump still appears to be the powerhouse of the GOP.

“This isn’t their Republican party anymore,” Donald Trump Jr., the president’s son, said at the Jan. 6 rally, referring to the more moderate members of the party. “This is Donald Trump’s party.”

“I suspect we will see a lot of that activity in the next couple of years out there for some of our members, myself included,” Thune told the New York Times.

Experts also expect to see some form of a primary challenge due to the intra-party divisions.

“I expect we'll see primary challengers for at least some of the Republicans that voted to impeach Trump, and perhaps even for some of those who voted against impeachment but for certifying the electoral college results,” Fong said. “I think it's too early to say whether those challenges will be particularly dangerous or not. On the one hand, it's always unpleasant to face a primary challenger who can run on a simple, salient message like, ‘He opposed Trump; I'm for Trump.’ On the other hand, a lot can happen in a year and a half. Tempers can cool. New issues can rise to dominate the agenda.”

Mitchell pointed out, however, that the two Georgia Senate runoffs “witnessed GOP candidates perform worse without Trump on the ballot.” So in 2022, with Trump not on the ballot and inevitable lower turnout compared to presidential elections, it could possibly prove rough for Trump-like lawmakers.

“So the lesson so far is that GOP pro-Trump candidates perform poorly when he isn't on the ballot,” Mitchell said.

Now, while it’s strikingly rare for all of the Hill to shift towards one ideology following a presidential term, being the minority party in both chambers of Congress actually puts “less pressure” on them to be unified to swiftly draft and pass legislation, according to Fong.