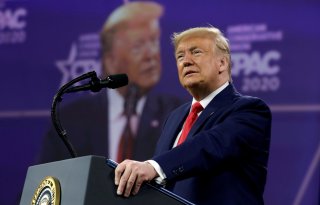 This weekend, conservative lawmakers, commentators and grassroots activists will mingle at the annual Conservative Political Action Conference (CPAC), an event that serves as the basis for discussions and speeches about the present and future path of the Republican Party. It can prove a stern testing ground for candidates: in 2012 Mitt Romney, who is now a senator in Utah, attracted widespread skepticism, even derision, for his description of himself at CPAC as a “severely conservative” governor of Massachusetts. This year, the backdrop to the conference is quite different. There is little doubt that Donald Trump remains the dominant influence in the GOP. Senate Minority Leader Mitch McConnell (R-Ky.) has retreated from his excoriation of Trump to state that he could easily win the nomination in 2024, an assessment that none other than Romney has echoed—Trump has “by far the largest voice and a big impact in my party.”

While CPAC takes place every year, the 2021 conference carries a bolder significance due to the fallout of Trump’s single term. And with the GOP shattered into factions based on levels of Trump loyalty, questions over the GOP’s leadership have developed as the top priority among party members, allowing rumored Republican presidential hopefuls to take center stage at the conference and carve a political vision for a base that’s locked with the former president.

“The meeting is an indication of the deep splits in the Republican party that will create problems for them in future elections,” said Michael A. Gillespie, a political science and philosophy professor at Duke University.

Starting on Friday, a sea of ardent Trump loyalists will participate in the conference’s proceedings, flaked with bolsters of their own presence in the party, in hopes to be accepted by the former president’s following. But those who have rejected Trump’s repeated claims of voter fraud and involvement in the Capitol insurrection will not be in the crowd.

Here’s a look at which speculated GOP White House hopefuls will and will not be at this year’s CPAC.

Who will be there?

For lawmakers who are considering taking a crack at running for president, a speaking slot at CPAC is dubbed as “prime real estate,” as it’s often acted as the first time presidential prospects can try to appeal to a crowd of powerful Republicans. This year, it’s important to note how close the speakers will tie to Trump, considering the former president still remains as the powerhouse of the GOP, consuming extensive influence over the moves of other party members.

Besides Trump—who is expected to deliver the conference’s main speech on Sunday—several other prominent Republicans eyeing a 2024 White House bid have garnered a spot on the stage.

With the event being held in Orlando, Fla., the Sunshine State’s governor, Ron DeSantis, has one of the most desired speaking slots for the conference, as he’ll jumpstart it Friday at 9 a.m. There are a number of other 2024 presidential prospects who’ve been designated speaking slots including, Sen. Gov. Kristi Noem of South Dakota; former Secretary of State Mike Pompeo; and Sens. Ted Cruz (Texas), Josh Hawley (Mo.), Rick Scott (Fla.) and Tom Cotton (Ark.).

And while these Republican lawmakers prepare to give memorable speeches in hopes to see success on a potential campaign trail, the looming question is whether Trump will run for a non-consecutive term. He’s teased it in the past, and if he does decide to seek office, it’s nearly guaranteed that he’d grapple the Republican nomination, as recent polls indicate that his support stands “unshaken” even after his second impeachment trial in the Senate.

If Trump doesn’t decide to run, then the CPAC speaker lineup features all Trump-like lawmakers who hope to prop up the MAGA mantle that the former president has brewed over the last four years.

But, there are some GOP presidential prospects who won’t be at this year’s conference.

Who won’t be in the crowd?

Former Vice President Mike Pence is perhaps the most remarkable member of the party who won't be attending the conference.

Although Pence still considers Trump to be a personal friend even after the Capitol assault where Trump supporters advocated to “hang Mike Pence,” the former vice president said he plans to lay low during the first few months of the new administration. A number of polls have revealed that Pence ranks second in support for a 2024 run for the commander-in-chief spot, right behind Trump.

“That Pence will not appear is perhaps not surprising,” Gillespie said, citing Trump’s involvement in the riot on Jan. 6 and public condemnations of Pence for not overturning the election results.

Another lawmaker who will be absent from CPAC is former UN ambassador Nikki Haley. While she was invited to the event, Haley declined the invitation, signaling her push to uphold her distanced stance from the former president, after coming forward last week in her clearest indication yet of being disappointed in Trump’s leadership. Haley has been a profile in opportunism, shifting between criticizing and praising the former president, but her decision to not attend this weekend’s proceedings is certainly significant in terms of how she’ll bob and weave if she decides to run. For now, Trump’s shadow continues to loom large over the GOP.