Grading Dictators: A Top Task for the Next President 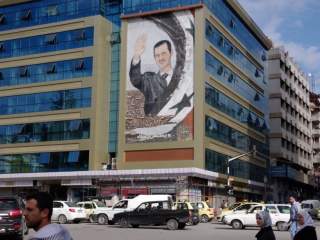 It’s not easy being the shining city on the hill. The need to deal with dictatorships has bedeviled American foreign policy since the birth of the nation. Our track record in this arena is definitely mixed.

Our most recent presidents have made a particularly poor job of it. George W. Bush inveighed against his Axis of Evil, but had some unsavory foreign friends as well. Perhaps most famously, Bush looked in Putin’s eyes and “was able to get a sense of his soul.”

President Obama has tried awkward—and arguably unsuccessful—bear hugs with Moscow, Havana, Tehran and Beijing. There were strongmen he didn’t embrace, but his interactions with leaders like Gaddafi, Mubarak and Assad ended badly as well.

The next occupant of the Oval Office will have to do better. Dictators at War and Peace, a recent book by Jessica L. P. Weeks, has some good tips.

Authoritarian regimes have always been a bit of bugbear for the leader of the free world. On the one hand, we are the country described by Alexis de Tocqueville as the “exceptional nation.” Americans find everything dictatorships stand for abhorrent. On the other hand, we are also the children of Machiavelli. The first duty of government is to defend the vital interests of the state. The demands of defense, on occasion, require doing business with authoritarian governments.

Further, out of respect for the sovereignty of other nations (and because of the practical limitations in intervention and nation-building) there is a natural reluctance to interfere in the affairs of other countries and skepticism regarding doctrines like “right to protect” that would supersede the authority of states and require nations to act like the world’s policeman.

However, there are times when it is necessary to go “over there,” to safeguard those over here. Regime change can be an unavoidable necessity.

Figuring out how to handle hard-to-handle nation-states has been the acme of American presidential leadership in the modern era. Our record is an admixture of success, failure and questionable calls, from handling Imperial Japan before World War II to managing relations with apartheid South Africa. When history failed to end with the end of the Cold War, dealing with difficult nondemocratic states became a common post–Cold War problem as well.

The next president will inevitably have to practice statecraft with disagreeable states. There are three regions critical to American security: Europe, the greater Middle East and Asia. The chief threat to European stability remains meddling from a Russian strongman. The Middle East has more than its fair share of unfair states. According to the Freedom House Index, only 5 percent of the region’s population lives in freedom. Security concerns in Asia are dominated by worries about authoritarian governments in Beijing and Pyongyang.

There are concerns in our own hemisphere, as well. While the Freedom House Index finds that “[t]he Americas are second only to Western Europe in levels of freedom and respect for human rights,” there is a growing divide in Latin America—between unfree regimes in countries like Venezuela and Cuba, and states committed to democracy and free markets.

In Dictators at War and Peace, Weeks, an assistant professor at the University of Wisconsin–Madison, offers guidelines for determining which autocratic leaders to worry about. “Existing scholarship,” she notes, “. . . tends to focus on the differences between democracies and dictatorships rather than variation among dictatorships. . . .” And that focus “provides relatively few answers,” she argues.

Weeks observes that some despotic regimes can be as peaceful as democratic states. That simple fact, she says, challenges popular assumptions that “democracy promotion” has to be an essential component of foreign policy, or that converting all states to freedom-loving regimes is crucial for achieving a stable international order.

Weeks suggests that we classify authoritarian regimes according to the way in which internal forces constrain the leaders who decide the issues of war and peace. She stresses the importance of determining whether there is a domestic audience that can hold the leader accountable, and whether the influencers and leaders are civilian or military.

The least aggressive and most cautious states, she finds, are civilian-led “machines”—regimes controlled by civilian dictators answering to nonmilitary elites. “[W]hen it comes to promoting international peace,” Weeks concludes, “mass-level democratization may be no more important than making sure the government is led by civilians and that no single all-powerful leader emerges.”

Dictators at War and Peace has its critics. Alexander B. Downes at George Washington University takes issue with Weeks’s interpretation of civil-military relations in authoritarian states. Downes argues that it “contradicts much work on civil-military relations that highlights the salience of leaders’ vulnerability to military coups.” Rather, he maintains, the “literature suggests that even in civilian-led authoritarian regimes, the military may still be an important audience that can influence the behavior of the state,” making some nations more or less of a threat than Weeks’s model predicts.

This raises a key problem with trying to rack and stack authoritarian rulers. Do we really know who is running the show?

In The Case for Democracy: The Power of Freedom to Overcome Tyranny and Terror, Natan Sharansky not only does an excellent job of explaining the difference between free and unfree states, he also highlights why dictatorships are so troubling. Closed regimes are by definition non-transparent. Accountability, responsibility and authority are obfuscated by webs of corruption, disinformation, secrecy, oppression and deceit. Thus, while it may be true that not all evil empires are equally threats to their neighbors, making that call can be harder than it looks.

Still, Weeks’s call to figure out what kinds of dictators we are dealing with and not treat all “not-nice” states the same is useful and important advice. While the United States should be an advocate for freedom and liberty, America should also be a cheerleader for the sovereignty of nationhood.

Nation-states have done more to advance and protect human liberty than any political institution since the dawn of time. Respecting individual liberty and national sovereignty demands that the United States directly intervene in the affairs of other states only under the most dire of conditions—when the safety, security and freedom of our own citizens are gravely threatened. Championing nationhood requires a tolerance for tolerating states that are not like us.

Weeks is right. It makes sense for the United States not to expend a great deal of statecraft on states that don’t matter.

U.S. strategy for dealing with Moscow, for example, shouldn’t be about preparing for a new Cold War, or trying to turn Russia into a democracy. Washington’s primary goal ought to be marginalizing Putin’s capacity to conduct disruptive activities that threaten the peace and stability of Western Europe. Likewise, the security relationship with Beijing can and should be structured to limit the potential for conflict without compromising U.S. interests.

But just because certain dictators might not represent a cause for war, doesn’t mean the United States should actively court them. War and peace are not the only issues at stake. By definition, even if some brutal regimes pose a lesser threat to us, they are still evil. Authoritarian bullies consciously and intentionally suppress human rights and individual liberty. Making nice with them is dumb, unless it serves a compelling national security interest and provides direct benefits to us. Expecting them to play nice is naïve, unless they have a compelling national interest to do so.

Few regimes were more despicable than Stalin’s Russia. But we needed the Red Army to win the war, and Stalin needed us to survive. A deal with the devil, yes, but a deal worth making. In contrast, the Russian “reset,” the kowtowing to China, the Iran deal and lifting sanctions on Cuba are all foreign-policy dead ends. The United States got nothing substantive, and in great abundance.

Likewise, the United States should be the last nation to say any dictator is a good thing for his countrymen or their neighbors. Assad is a case in point. The Syrian dictator is a mass murderer, and a source of misery for many throughout the Middle East. But publicly demanding he step down is pointless, because as long as Moscow and Tehran support him, Assad isn’t going anywhere.

Further, dumping Assad isn’t crucial to protecting vital U.S. interests in the region. Breaking ISIS’s control over territory in Iraq is crucial. That might require conducting some operations in Syria, but it doesn’t require solving Syria. That said, there’s still no reason to cheerlead for him, or for any other strongman in a region that has suffered under far too many of that ilk.

There are times when promoting freedom makes sense, even when issues of war and peace are not on the line. Promoting economic freedom for unfree states makes sense, whether those states are adversarial to us or not. It’s in their peoples’ best interest, and in ours. Likewise, the United States ought to play a role in encouraging states, good and bad, to help stem the spread of Islamism.