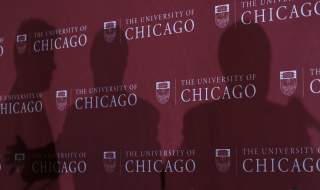 Hanna Holborn Gray was the first woman president of a major American university—Yale, as acting president for more than a year, and if one does not count that, president of the University of Chicago for fifteen years. Once deemed “the most distinguished woman in the academic world,” she served on the Harvard and Yale corporations, as well as on the board of directors of the Andrew Mellon Foundation, the Council on Foreign Relations, the Mayo Clinic and the Brookings Institution; a few years ago she stepped down as president of the Howard Hughes Medical Foundation, the second largest foundation in America. She probably has received more honorary degrees than anyone other than the Dalai Lama. Those who have seen her know her magisterial bearing. Her memoir contains magisterial reflections but is also sprightly, often playful, and chockful of entertaining anecdotes.

Even though Hanna Gray was a childhood refugee from Hitler’s Germany, she had a head start in life. The family was forced to flee because Hanna’s mother was Jewish, but her Christian father, Hajo Holborn, who had gained a doctorate in history from the University of Berlin, was well-connected. He looked for employment in the United States immediately after the Nazi takeover, sailing alone to America with financial support from the Carnegie Endowment for International Peace in February of 1933. In April, he was faced with the difficult choice of whether to accept a faculty position at either Harvard or Yale and opted for the latter. His daughter writes that “the outcome seemed a kind of miracle” yet adds: “it is quite certain that, had he been Jewish, his search would have been unlikely to end in a department of history in the Ivy League.”

Holborn brought his family over in the summer of 1934. Hanna was four. She recalls that “the ship docked at midnight after sailing past a brightly lit Statue of Liberty.” She was very excited because it was the latest she had ever been up. Foreseeing the reader’s wonder about whether memories of a four-year old might be suspect, she writes that the details of the landing “were so often repeated as part of family lore that [they were] reinforced in my personal sense of a significant past moment.” Hanna’s mother, Annemarie Bettmann, came from a Heidelberg professorial family that mingled with the Heidelberg intellectual elite. Annemarie herself gained a doctorate at Berlin in classical philology before marrying Hajo Holborn. Gray writes that both parents were “steeped in the study of Greek and Latin.” Both were left-of-center social democrats. In the Holborn living room, young Hanna listened to her parents’ conversations with intellectuals such as Erich Auerbach, Paul Hindemith and Ernst Cassirer, “with his great mane of white hair like a movie producer’s vision of a philosopher.” There was also the Sanskrit folklorist Heinrich Zimmer and his wife, the daughter of Hugo von Hoffmannsthal, Erwin Panofsky, Paul Tillich and Hannah Arendt. The historian Ernst Kantorowicz was there too.

Hanna attended the private Foote school in New Haven—“with Bryn Mawr standards: both rigorous and mildly progressive.” When her father moved to Washington with his family for war work (OSS, of course), it was the Sidwell Friends School. (Perhaps out of modesty the author neglects to mention that in Washington she appeared on the local radio as a “Quiz Kid.”) When it was time for her to choose a college, she narrowed it down to either Smith or Bryn Mawr: “with great excitement I told my father that I would be attending Smith. ‘No,’ he said, ‘you are going to Bryn Mawr.’ And so I did.”

Gray’s Bryn Mawr chapter is full of lively incident. We may not be entirely surprised to learn that on May Day Bryn Mawr girls danced around a maypole in “gauzy long white dresses with garlands around their heads,” but it surely is surprising to learn that teen-aged Hanna, scorning the garlands, managed to fly a Hammer and Sickle flag from the tower of the main administration building. The prankster was outstripped by the deeply engaged student. First-year Latin was not offered at Bryn Mawr because an entrance requirement was at least three prior years of the language. Hanna still felt shaky in Latin in her first year, but managed to improve: “the apex of [her] undergraduate education was to study Tacitus, Livy, and Lucretius.” Her teacher, the great classicist Lily Ross Taylor, insisted that students recite the works aloud, with the result that Hanna Gray still has “quite a bit of Lucretius etched in [her] memory.” Nevertheless, she majored in history. In her second year she experienced a “kind of epiphany” one winter evening when she entered the library. As she tells it, “the worn wooden steps gave off their usual creak, the distinctive odor of books was in the air” and she “suddenly realized that I could be happy to do this every night for the rest of my life.” A highpoint at Bryn Mawr was hearing T.S. Eliot read from his work “in a hauntingly thin and world-weary voice.” The next morning Hanna had breakfast with him in her capacity as an interviewer for the college paper, and this led him to invite her to see him whenever she might be in London. Which she subsequently did: “he was very kind to the young.”

Two aspects of Bryn Mawr that Gray discusses offer leitmotifs for the rest of the book. One concerns the challenges of career-oriented women. “Miss Thomas,” a formidable early president, did not really say “only our failures marry.” But “she might have said: ‘our failures only marry.’” Be that as it may, Bryn Mawr surely groomed its female students for careers, whether married or not. Most hoped to find satisfying jobs as well as husbands, but “we were a little vague about how we were going to combine careers and families.” Gray went ahead toward a career in scholarship (she had not foreseen administration) as well as managing a harmonious marriage, but her account of all the doors she had to open to pursue her career is continually riveting. Second, Bryn Mawr also helped clarify the goals of higher education for her. Much though the school’s culture enhanced the self-confidence, even toughness, of women, as a women’s college it did not aim to train “leaders,” let alone “leaders in the nation’s service.” Instead, the Bryn Mawr ethos was that liberal arts offered “a good in themselves.” She returns to this toward the end of the book, speaking of “the fundamental importance [. . .] of cultivating intellectual interests precisely because they matter greatly in themselves and are of enduring value in defining the animating spirit and vitality of civilization itself.”

AFTER BRYN Mawr, where else was the gifted daughter of Hajo Holborn to go but Oxford and Harvard? At Oxford for a year she wished to begin advanced study in Renaissance history but was frustrated by the lack of professionalism and a prejudice against women she had not yet met. Hugh Trevor-Roper did know something about her chosen research topic, “but he did not much like teaching girls [. . .] and thought only an undergraduate degree made sense for them.” Gray did continue her education informally as a result of being “taken on” by Eduard Fraenkel, a severe classicist. Fraenkel decided that her ignorance of Greek needed to be remedied and Latin was not to be neglected. Once, when she was with his family on New Year’s Eve, he asked her to read and translate aloud passages from the odes of Horace. (He was making a point at the expense of his children.)

Gray matriculated at Harvard in 1951. Her Latin facility now led to her marriage. In her first year she signed up for a graduate course in the works of Erasmus. Not surprisingly, there were only two other students because Erasmus’s Latin is notoriously more Ciceronian than Cicero. But one of these students was Charles Gray, who had just taken his bachelor’s at Harvard summa cum laude. Hanna Holborn thought she had “never encountered anyone more likeable,” and soon enough the two were married. Another graduate student whom she came to know was Henry Kissinger, who “didn’t seem like a graduate student at all but appeared already to have reached some higher stage of being.” Gray recounts that she “developed a minor reputation as a mimic with a special aptitude for doing Henry Kissinger”; later, the foreign minister of Turkey, who had been well briefed, asked her to demonstrate this talent but she declined out of propriety. After receiving her doctorate, Gray became an assistant professor of history at Harvard. She passes over this astonishing fact while turning to another. She was required to attend department meetings held at lunch time in the Faculty Club, but women were not allowed to enter through the front door. Nevertheless, she ignored the injunction and no one stopped her. Much more door opening was to come.