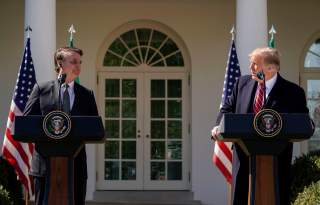 Brazil’s President Jair Bolsonaro recently visited Israel and unlike former president Luiz Inácio Lula da Silva, the last Brazilian leader to make such a trip, he did all the right things. Lula da Silva (currently behind bars on several corruption charges) avoided the customary trip to Yad Vashem (Israel’s memorial to the victims of the Holocaust), which is de rigueur for visiting world leaders. He went, instead, to Yasser Arafat’s tomb, in Ramalah, he was asked to leave Israel and told not to return. Bolsonaro, by contrast, prayed at the Wailing Wall with Benjamin Netanyahu, personally thanked the Israeli military for their help during the search and recovery efforts in the aftermath of the Brumadinho mudslide, and signaled he will be opening a trade and tech office in Jerusalem.

This is the most recent move in the foreseen realignment of Brazilian foreign policy. Israel was Bolsonaro’s first stop outside the Americas. The visit was staunchly criticized by Lula da Silva’s former ally in the region: Hamas. If Bolsonaro seems chummy with Netanyahu, then keep in mind that the prime minister was the first Israeli leader to attend a Brazilian presidential inauguration. Lula da Silva had very different connections in the region; he infamously called Col. Muammar el-Qaddafi his “brother, mentor, and teacher.”

The other pivot Brazil’s foreign policy has taken lies closer to home. On a recent visit to Chile, South America’s most open and liberalized economy, Bolsonaro’s meeting with Chilean president Sebastián Piñera served to further cement a free-trade agreement between both countries, which is yet to be ratified by each nation’s congress. Bolsonaro and Piñera also unveiled the founding of Prosul (Prosur in Spanish), a convening of South American nations dedicated to expanding much-needed free trade within the continent. Paulo Guedes, Brazil’s newly minted minister of the economy and a University of Chicago graduate, is pushing for greater trade liberalization, one of Bolsonaro’s key campaign promises. This visit also served to put an end to Brazil’s involvement in the Union of South American Nations, which was largely viewed in Brazil as an attempt by Venezuela to spread its influence around the continent.

Bolsonaro’s visit to Chile took place shortly after his visit to the United States, where he met president Trump, who thanked him for his leadership in the Lima Group (formed by Canada, Brazil and twelve other nations in the region) in dealing with the current humanitarian crisis in Venezuela. Trump lent Bolsonaro much needed support concerning Brazil’s bid to join the Organization for Economic Co-operation and Development. In addition, the two presidents signed several agreements in order to boost trade between their countries. Over the past decade, China replaced the United States as Brazil’s main trading partner. There was also talk of Brazil becoming a NATO “global partner,” the only Latin American country to currently hold that status is Colombia. This is quite a contrast from a Brazil that was purchasing all of its combat helicopters from Russia right up until 2014.

The Brazilian president’s first international outing was to the World Economic Forum, in Davos. In his opening speech, Bolsonaro made it clear that Brazil is open for business, announcing at the same time his intention of placing his country among those with the World Bank’s Ease of Doing Business Index. A lofty goal indeed, considering that after almost fifteen years of mismanagement, Brazil currently ranks 109th in the Index, sandwiched between Papua New Guinea and Nepal. Bolsonaro drew praise from Italy’s deputy prime minister, Matteo Salvini, for turning over Cesare Battisti to Italian justice, who was given political asylum in Brazil by Lula da Silva even though Battisti was wanted in Italy for the murder of four Italians. Bolsonaro also met with heads of state from the Netherlands, Poland, and Switzerland, the latter being a key ally in recovering the billions in public funds that different members of Lula da Silva’s Worker Party stashed away in Swiss bank accounts.

All in all, the move towards free trade, closer ties with the world’s democracies, and regional cooperation unburned by Venezuela’s petro-dollars and “twenty-first century socialism” seem like a net positive for Brazil. Trade represents a paltry 24 percent of Brazilian Gross Domestic Product. Although some of that results from the country’s focus on its large internal market, much is due to the combination of byzantine regulations and the country’s crumbling infrastructure, known as the “Brazil cost.” If Bolsonaro continues to push for privatization in infrastructure and a drastic reduction in red tape, then foreign investment will likely follow. Brazil’s realignment will probably be seen as a positive step in the right direction.