Great Contemporaries: Kissinger on the Secrets to Leadership 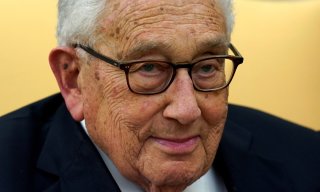 WHEN HENRY Kissinger recently suggested at Davos that Russia and Ukraine should initiate peace negotiations and that “ideally, the dividing line should return the status quo ante,” he created an international furor. Ukrainian president Volodymyr Zelenskyy, for example, complained,

Behind all these geopolitical speculations of those who advise Ukraine to give away something to Russia, “great geopoliticians” are always unwilling to see ordinary people. Millions of those who actually live in the territory they propose to exchange for the illusion of peace. You must always see people.

The truth is that some variation of Zelenskyy’s complaint has regularly been lodged at the exponents of realpolitik who are, more often than not, accused of seeing smaller nations as mere pawns on a global chessboard to be disposed of by the great powers, whether at the Berlin Conference in 1885 that carved up Africa or the Yalta Conference in 1945 that disposed of Poland.

In this instance, as Kissinger himself explained in an interview with the historian Andrew Roberts in the London Spectator, his remarks were being misconstrued. His aim was not to counsel appeasement, as his detractors claimed, but, rather, to suggest that Ukraine could be reconstituted along the lines that it resembled after the Russian annexation of Crimea in 2014. This, in turn, would represent something of a victory for Ukraine in the form of a frozen conflict that could eventually be settled on Western terms, much as the Warsaw Pact ended up peacefully dissolving in 1989. What’s more, the addition of Finland and Sweden to NATO, which recently strengthened the defense of the Baltic states, coupled with a successful Ukrainian rebuff of the Kremlin’s attempt to create a Russian glacis, would demonstrate, Kissinger stated,

...that the fear that has hung over Europe since World War II, of a Russian army descending—the conventional army descending into Europe across established borders—can be prevented by NATO conventional action. For the first time in recent history, Russia would have to face a need for coexistence with Europe as an entity, rather than America being the chief element in defending Europe with its nuclear forces.

AS KISSINGER’S splendid new book Leadership reminds us, he has always been a classical realist who believes in a balance of power and champions American ties with Europe. He may view the longstanding missionary impulse of American society with skepticism, if not apprehension, but he also shares little of the current vogue on some precincts of the American Right for severing Washington from its postwar alliances. Instead, at age ninety-nine, he represents the last link to the members of the American foreign policy establishment—Dean Acheson, George F. Kennan, Paul Nitze, Clark Clifford, and Robert Lovett, among others—who played a key role in shaping the modern world, largely on American terms, after World War II. His support for a Europe that remains connected to America but can defend itself is fully consonant with their postwar vision of international affairs.

Drawing on his encounters with world leaders, Kissinger in Leadership offers important insights about both statecraft and personality in coping with crises. The leaders he studies include Konrad Adenauer, Charles de Gaulle, Margaret Thatcher, and Richard M. Nixon. Some of the most interesting and revealing passages center on his encounters with them. Kissinger deftly sketches the international context that they operated in and their attempts to promote, as far as possible, the national interests of the countries that they led. He concludes with a rather gloomy assessment of the current state of American leadership, suggesting that transient political pressures are overwhelming a sense of the enduring import of history.

Perhaps it should come as no surprise that Kissinger, who emigrated from Germany to America in 1938 with his family when he was fifteen years old, opens with a lengthy exposition about the greatest German statesman of the past century, Konrad Adenauer. The coldly austere Adenauer, a Rhinelander who despised Prussia and its militaristic traditions, did not wish to create a neutral and unified Germany, as did his fiery socialist counterpart Kurt Schumacher, but was an impassioned advocate of Westbindung, or ties to the West. Only a Germany anchored in the West, he believed, could successfully overcome the fateful impulses that had led to its moral degradation and physical destruction during World War II. Kissinger himself returned to a defeated Germany as an intelligence officer after the war and went on to meet numerous times with Adenauer in his capacity as an American scholar, then as an advisor to the Kennedy administration. Kissinger recounts, “My admiration of Adenauer’s leadership notwithstanding, I remained concerned during this period about the impact of Germany’s turbulent political culture on the decisions imposed on it by the Cold War.”

Kissinger first met der Alte, or the aged one, as Adenauer was known, in 1957 in the Palais Schaumburg in Bonn, the capital of West Germany. He received a good taste of Adenauer’s ruthlessness when, upon noting Kissinger’s surprise that he had just cordially ushered a political foe out of his office, Adenauer remarked, “My dear Mr. Professor, in politics it is important to retaliate in cold blood.” Adenauer’s abiding preoccupation, Kissinger emphasizes, was the reliability of the American nuclear guarantee, but his apprehensions were assuaged by a private briefing that Kissinger provided in 1962 that emphasized the disparity between Soviet and American second-strike capabilities. Kissinger explains that the generational gap between Adenauer and John F. Kennedy was bound to create frictions, especially since the American president was determined to ameliorate East-West tensions and to secure Soviet participation in reaching arms control agreements. Kissinger shrewdly notes, “Kennedy had the more global approach, Adenauer the fortitude to face the moral and physical collapse of his country, living with its partition and building a new European order based on Atlantic partnership.”

Throughout, NATO and the European Community, as it was known then, were Adenauer’s lodestars. “Adenauer’s strategy,” Kissinger writes, “relied on the containment policy devised by George Kennan and implemented by U.S. Secretaries of State Dean Acheson and John Foster Dulles.” It was predicated on the belief that the Soviet bloc would eventually be forced to confront its internal contradictions. Then the correlation of forces would be in the West’s favor. And so it was. The Soviet empire collapsed in 1989. In October 1990, Germany was reunified.

AT THE heart of the rise of Western Europe was the rapprochement between France and Germany. Kissinger has many valuable things to impart about Charles de Gaulle who had worked closely with Winston Churchill and defied the scorn of Franklin D. Roosevelt during the second world war. De Gaulle overcame the seemingly inveterate hostilities between Germany and France. In 1963, he signed a Treaty of Friendship with Germany and Adenauer was the only foreign leader that he invited to stay overnight at his home. De Gaulle, though, caused fits for the Western alliance, withdrawing from NATO’s integrated military command in 1966. Kissinger suggests that French foreign policy remains profoundly shaped by Gaullist tendencies down to this day.

Andre Malraux described the French leader who rescued his nation as “a man of the day before yesterday and the day after tomorrow.” In Kissinger’s view, “De Gaulle defined his goals in the visionary mode of the prophet, but his execution was in the mode of the statesman, steely and calculating.” Kissinger sees Churchill as the emanation of British tradition and de Gaulle as the unique expression of a particular personality and set of principles. He credits de Gaulle with extraordinary percipience on several occasions. In June 1940, he came to the opposite judgment of the French political class, declaring that resistance to the Nazis was imperative and that both the Soviet Union and the United States would be drawn into the war and would defeat the Third Reich. After the liberation of France, he resigned as head of the provisional government, emerging twelve years later to reinvent the French state and to withdraw from the calamitous conflict in Algeria. His life, Kissinger writes, “supplies a case study in how great leaders can master circumstance and forge history.”

If de Gaulle sought to reorient French foreign policy, then Richard M. Nixon attempted to carry out a similar feat in Washington. Kissinger stresses that Nixon’s view of foreign affairs was sometimes caricatured during his own lifetime. He notes that Nixon traveled widely before becoming president and met many world leaders: “in these circles he was treated as a serious figure—an attitude not always in evidence among domestic adversaries or journalists.” The idea that stability and peace were the normal state of affairs in global politics was foreign to Nixon. So was the conviction that once a hostile power was defeated then comity would automatically prevail ever afterwards. According to Kissinger, “he viewed peace as a state of fragile and fluid equilibrium among the great powers, a precarious balance that in turn constituted a vital component of international stability.” After quoting a 1971 Nixon statement about the need for a global balance of power, Kissinger goes on to issue his ultimate accolade: “Any of the great British statesmen of the nineteenth century would have made a comparable statement about the balancing of power in Europe.” Had Nixon’s second term not been devoured by Watergate, Kissinger speculates, he might have been able to establish a lasting reorientation of American foreign policy, centering not only on a recalibration of strategy but also of mindset. “In this scenario, America’s exceptionalism would be understood to owe as much to the deft and measured exercise of its inherent strength,” he writes, “as to its determination to validate its founding principles.” It was not to be. Instead, Jimmy Carter entered office in 1977 and transformed human rights into a constituent element of American foreign policy, one that Ronald Reagan adopted and officially sanctioned by calling for the establishment of a National Endowment for Democracy in a speech at Westminster in 1983 prognosticating the demise of the Soviet Union.