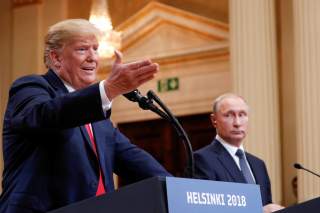 Donald Trump and Vladimir Putin posed for photographs, shook hands, and met for hours behind closed doors. And the world is still standing.

Reading and listening to the old, reformed neoconservative hands who have made a comeback in the Trump era (like Jennifer Rubin of the Washington Post and Max Boot on CNN), you would think that Trump even stepping foot in the same room as Putin would destroy the NATO alliance and the “liberal rules-based order” as we know it. Trump, the assumption went, would inevitably say or do something stupid in his one-on-one with the wily, canny, former intelligence operative. Perhaps he would hand the Crimea or Eastern Ukraine to the Russians on a silver platter or agree to lobby Congress for a relaxation of comprehensive economic sanctions. Indeed, when former Deputy Secretary of State Strobe Talbott counts on the judgment and wisdom of John Bolton to restrain Trump from his worse impulses, then you know the country is in uncharted territory.

But for Trump, sitting down with Vladimir Putin was always a dream come true—not necessarily because Vladimir Putin is a wonderful guy, but rather because doing so would be an historical moment in Trump’s mind akin to the old Ronald Reagan-Mikhail Gorbachev summits during the Cold War days. Trump is desperately in search of affirmation and admiration. He wants to be treated as a figure of enormous importance, a man who can turn Washington’s icy bilateral relationship with Moscow into something constructive. What better way to realize those daydreams and feed that sense of importance than by talking with Vlad, the tough-guy who once brought his dog with him into the room during a meeting with German Chancellor Angela Merkel for no other purpose than to frighten her?

If the purpose of Trump’s summit in Helsinki was, as he told the assembled press, to transform Russia from a competitor to a friend (“I hold both countries responsible” for the chill in relations, Trump said during his press conference. :We should have, frankly, had this dialogue a long time ago.”), then he handicapped himself by refusing to yet again acknowledge that the Russians were trying to manipulate the American electorate during the 2016 presidential election to his electoral benefit. Taking the word of a strongman who deputes his intelligence service to murder dissidents on British soil with a nerve is about as politically self-defeating as you can get. Trump’s denial is also completely detached from reality; of course Moscow preferred Trump over Hillary Clinton, the Democratic presidential nominee who holds a special place in Putin’s version of hell.

Yet just as obvious as Moscow’s hacking campaign during the 2016 election is Trump’s unwillingness to admit that anyone other than himself helped him pull off the biggest upset in U.S. political history. Columnists, television pundits, and analysts across Washington assume Trump’s repeated denials are a product of his infatuation with cozying up to Putin. Others offer a more sinister explanation: Trump simply can’t endorse the assessment of his own intelligence professionals because the Russians have something on him, like evidence of financial improprieties or personal foibles. The more innocent and likely reason, that Trump’s ego cannot handle the thought that a foreign power meddled on his behalf, is all too easily dismissed.

Now that the summit is over, the foreign-policy establishment in Washington can breathe a sigh of relief. The Baltic states nestled ever so closely to the Russian bear will be happy to know that Trump did not mimic his negotiating tactics in Singapore and unilaterally suspend U.S. participation in NATO military exercises in order to send a signal of good faith to Putin. The nerves of the Russia hawks in Congress will steady, assured that the unpredictable commander-in-chief didn’t gift Ukraine’s Crimea Peninsula to the Russians with a bow on top. All of the hype about Trump being played like a violent by the stone-faced, poker player Putin was just that: hype. As far as we know, both presidents will return to their respective capitals with very little to show for the pow-wow. And for the many of Trump’s critics, many of whom wanted him to cancel his meeting with the Russian strongman after Special Counsel Robert Mueller’s latest indictments, a dull summit is just fine with them.

The irony is that Donald Trump’s calculations are probably right: it is, indeed, better to get along with Russia than not. The two countries, after all, have 90 percent of the world’s nuclear arms between them; to simply cut off all communication with Moscow and sanction the Russians into oblivion in the naive hope that they will reform their behavior does not add stability to an increasingly unstable international system. Nor is it likely to work, as evident in Moscow’s foreign policy over the past four years. The more jaw-jaw with Moscow, the less of a likelihood the United States and Russia will act against each other based on faulty assumptions and misconceptions.

There may not be a single, significant deliverable that Trump and Putin can wave to their people as a sign of success. The deliverable here is the meeting itself—and while that may not give Donald Trump the acclaim he pines for in the history books, it is at least the first step toward a relationship with the Russians that can be called more stable and predictable.