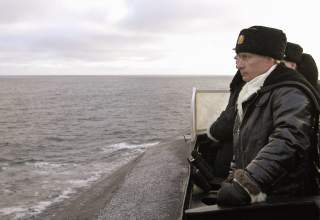 Temperatures are rising inside the arctic circle. Earlier this month, the Russian government irked Washington by claiming sovereign rights over the Northern Sea Route (NSR). The waterway, which stretches from Russia’s border with Norway to the Bering Strait between Siberia and Alaska, is one of the world’s emerging trade arteries.

A new law will require all foreign warships using the route to seek Russia’s permission at least forty-five days in advance, with requests to be approved or denied at Moscow’s discretion. In the event of an unsanctioned passage, Russia may arrest intruder ships or even destroy them.

Much of the NSR passes through Russia’s “exclusive economic zone”—a two-hundred-mile stretch of water where Moscow can set the rules. But other parts, notably the Bering Strait, lie in international waters, where safe passage for foreign warships is usually guaranteed.

The law shows how Russia is laying down the gauntlet to other regional powers. When U.S. Naval Commander James Foggo declared the arctic was “nobody’s lake,” he was mocked by Russian politicians.

Concurrently, the region is becoming a major geopolitical flashpoint. In recent years, Russia has dramatically expanded its presence in the far north, where it boasts a slew of new military and air bases. The country’s armed forces have new submarines, aircraft and tanks—all specifically designed for arctic combat. In addition to a forty-strong fleet of icebreakers, Russia is building another eight, including two ice-capable warships armed with cruise missiles. These vessels allow the Russian navy to respond to security threats, facilitate emerging commercial activities and defend its Exclusive Economic Zone claims.

By contrast, the U.S. military is so badly-equipped for polar missions that it has earned the scorn of Russian military experts. It lacks a single major base north of the arctic circle, or any aircrafts or warships that can operate in such low temperatures.

The U.S. Navy’s icebreaker fleet—now down to two vessels—is in an even more parlous state. Crew members on the Polar Star, America’s only heavy icebreaker, narrowly averted disaster last year after icy water began pouring through the forty-two-year old ship’s hull. Three years ago, engineers had to fashion a new part from a surfboard repair kit after a generator exploded. Funding for a new $750 million vessel was finally approved by the U.S. Senate in 2018, only for the House to divert the funds to President Donald Trump’s border wall (it was eventually refunded last month).

The power imbalance could make it hard for American troops to respond to crises. Russian forces encroaching on a U.S. exclusive economic zone or staging a show of force could catch the world’s largest military power flat-footed. “We need to look differently at what an icebreaker does” Adm. Paul Zukunuft urged Congress in 2017, warning that Russia’s military could extend their influence to over five million square miles of arctic sea.

It remains to be seen whether Moscow’s arctic gambit can deliver tangible results. Warmer temperatures will make mineral deposits easier to exploit, but lower commodity prices and U.S. sanctions, which restrict Russia’s access to arctic offshore drilling technologies, may complicate their feasibility.

Meanwhile, support infrastructure for the NSR—like upgraded ports for commercial vessels—will not be ready for at least another decade. Heavy upfront costs may also force the cash-strapped Russian government to surrender its early dominance to China, which unveiled plans last year to extend its Belt and Road Initiative to the North Pole.

For the foreseeable future, the arctic will continue to lack the geopolitical significance of waterways such as the South China Sea or the Suez Canal. But the once-impassable region is now an arena where global powers are jockeying for dominance. Expect arctic security to start featuring on Washington’s radar.

Geoff Upton is an MPhil candidate in Russian & East European Studies at Oxford University, and the co-founder of ssuinsight.com