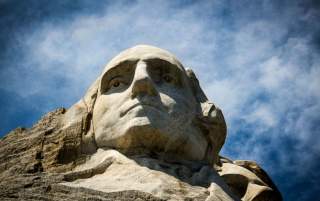 IN 1973, the prominent New York Times foreign-affairs columnist C. L. Sulzberger produced a book entitled An Age of Mediocrity, which covered the period of history from 1963 to 1972. It posited that all the great men of the previous era had passed from the scene or shortly would do so, and that no figures of greatness were emerging to replace them. “Our age of mediocrity,” he wrote, “is marked not only by an absence of outstanding men, but also by an absence of vigorous new ideas.” He added that, in an era without credos or ideology, “men must look even more to inspirational leadership, a characteristic that now seems lacking.”

Sulzberger quoted former secretary of state Dean Acheson, arguably a man of greatness himself, as saying, “We are now in a period where there are mediocre men everywhere. People have opinions but no knowledge, and leaders are made in the image of the masses.” At lunch one day in Paris, the great French intellectual and warrior André Malraux told Sulzberger, “This is a sadly barren era: there are no great men in any field. . . . None in America, in Europe.” Around the same time, the prominent columnist Joseph Alsop returned from his last European reporting trip just before retiring and detonated a polemical blast at the entire era. “In the former capital of the Western world,” wrote Alsop, “the pygmies now seem to reign supreme. Pygmy views on every subject are almost the only ones that are publicly heard.”

The lament of fading greatness is nothing new. Every generation, looking at its public men when their warts are all too visible, wonders whether the heroic figures are all gone now. But it is instructive that this lament was particularly pronounced in America and Europe during the 1960s and into the 1970s. It is explained perhaps by the fact that this particular time succeeded a truly heroic age, when the old order crumbled to dust, amid much destruction and carnage, and a new one had to be designed and built. Thus, the men who constructed that new order—Churchill, Franklin Roosevelt, de Gaulle, Truman, Stalin, Mao and many others who clustered around them to play major roles in the struggle—possess the look of greatness because they emerged at a time of great events and ended up successfully shaping those events. Greatness is as greatness does.

Now comes Aaron David Miller, a writer, scholar and former State Department adviser, to argue not only that greatness is gone in America’s presidential politics but also that we should all rejoice in its passing. His provocative thesis is reflected in his new book’s title: The End of Greatness: Why America Can’t Have (and Doesn’t Want) Another Great President. There’s a certain in-your-face quality in Miller’s iconoclasm, so at odds with the conventional view that magisterial leadership is “the solution, if not the panacea, to just about everything that ails us,” as Miller sardonically puts it. He concludes, “That we cannot have another giant seems self-evident. That we seldom need one, now that the country has moved beyond the kind of profoundly nation-threatening and encumbering crises that confronted it in the past, seems clear too.”

In the end, he is probably wrong. But his intellectual trek wends its way into lush forests of insight and charm, through underbrush and past tall pines of history, biography, political science and human understanding. While the destination may not yield the panoramic view that is promised along the way, the journey is its own reward.

IN PUTTING forth his thesis, Miller explores the literature of presidential ratings that emanated from the polls of historians on White House performance over the past half century or more and offers his own evaluations of particular presidents whose achievement levels he places into various categories of success or lack of it. Through this process he traces the development of presidential leadership in America and presents a window into how the office works. (He also offers, I note here by way of disclosure, a few welcome words of regard for my book on the subject, Where They Stand.)

Throughout American history, writes Miller, the country has seen only three truly great presidents—George Washington, Abraham Lincoln and Franklin Roosevelt. They were the three “indispensables,” whose achievements were “real, measurable, and defined by crises overcome and legacies that endure.” This corresponds with conventional wisdom. Through the numerous polls of historians on presidential performance since this practice began in 1948, these men consistently rank as the top three, usually with Lincoln as the greatest, then Washington and then FDR.

Miller argues that these giants of American history emerged through the convergence of three elements, which he calls the “Three Cs of Greatness”—crisis, character and capacity. First, there had to be a prolonged crisis of severe magnitude that threatened the nation’s future. Only such a crisis or challenge, he says, can pave the way for major transformational change. Second, these men all possessed the character traits—ambition, courage, discipline, psychological balance and self-confidence—that translated into strong leadership and endowed them with the ability to see the big picture of their era. Third, they had capacity—a strength of temperament mixed with the skills and wiles needed to operate the levers of power successfully in a system designed to keep those levers from being easily manipulated (or abused).

The first of these, the crisis factor, gets to the heart of Miller’s thesis. He notes that, particularly in a presidential system such as ours, epic decision making isn’t possible without “enormous stress, crisis, and emergency: the door openers to great performances in the presidency.” Miller adds, “Unless the times offer up the opportunity, the margin for heroic action diminishes, particularly in a political system that constrains the accretion of power and the desire for significant change [among voters] in ordinary times.”

He is correct here, and others have made the same point, not only in terms of the American system but also as a universal reality. In his 1973 lament for the passing of great leaders, Sulzberger noted that mediocrity might actually carry certain political benefits. “Political giants are produced by crises—or produce them,” he wrote. President Barack Obama’s early chief of staff, Rahm Emanuel, expressed this same sentiment from a slightly different angle when his boss entered the Oval Office in the midst of economic upheaval. “You never want a serious crisis to go to waste,” said Emanuel, denoting Obama’s studied expectation of presidential greatness (an expectation, as Miller suggests, that has proved elusive, despite the crisis that greeted his ascension).

WHERE MILLER perhaps goes awry is in turning this truism around and suggesting that, since great leaders only emerge in crises and nobody wants a crisis, we shouldn’t want great leaders either. We tend to forget, writes Miller, “that great leaders almost always emerge in times of national crisis, trauma, and exigency, a risk we run if we hunger for the return of such leaders.” Elsewhere in the book, he asks, “If threat, danger, and calamity are required for greatness in the presidency, why would we ever want another great president?”

The flaw in this thinking is obvious. If we only need life insurance when we die, why would anybody want life insurance, since nobody wants to die? But of course we all die at some point, and at that stage life insurance comes in handy for our loved ones. Similarly, with presidential leadership, crises seem to be an intermittent part of history, and when they occur—whatever their magnitude—we want presidential leadership equal to the challenge. True, as Miller suggests, the crisis may not be of such intensity as to clear the way for the kinds of presidents who alter the national landscape and set the country upon a new direction. That’s fine. If the consensus isn’t there for such a forceful leader (and such moments are extremely rare, as Miller correctly notes), then perhaps it can be assumed that the country is getting the level of leadership that it needs at that particular time.

As Miller writes, “Make no mistake: without crisis and a president who recognizes the inherent opportunity of the moment, the seeds of transformative change in American society do not get planted and cannot grow.”

He is right to emphasize that not every president can be a transformative leader, because the country can’t allow itself to be in a constant state of transformation. Sometimes the country simply needs sound management that addresses the problems of the day in a deft and appropriate manner and focuses on keeping the country out of crises. The Founders, writes Miller, wanted the president to be “a strong executive, accountable and constrained”—in other words, a leader wielding the level of power needed to meet the challenges of the day, but not empowered to act capriciously or to take the country where it doesn’t want to go. This is an important point, and Miller expresses it well.