Greece and the EU: The Great Financial Trainwreck 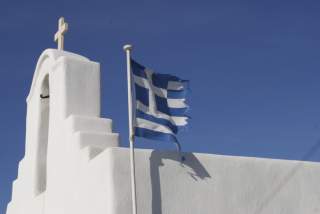 Three months after a new government took power in Greece, the country has made little progress in bridging its differences with its creditors. The government’s strategy is not producing concessions, but this failure is only fueling demands for an even tougher stance towards its creditors. Meanwhile, the room for maneuver is narrowing: liquidity is low, the real economy is paralyzed and the country has squandered whatever patience and goodwill it still had.

Where does Greece go from here?

What is not possible is a grand bargain—a mega agreement whereby Greece implements further reforms that put the country on a sustainable economic and fiscal path, and in exchange, the European creditors and the International Monetary Fund (IMF) offer a combination of additional funds and debt relief. This was the country’s trajectory in 2014: wrap up the existing program, secure emergency credit in case borrowing costs rose again and come back to seek a long-term solution to excess debt.

Such a deal is no longer possible because it contradicts everything that the ruling SYRIZA party stands for—which can be summed up into “more state control and more state spending.” Even today, five years into “austerity,” Greece has a trickle of a primary surplus, yet SYRIZA was elected to undo the reforms that produced this surplus to begin with. SYRIZA could only implement its platform if it had access to vastly more money—and it can only have access to vastly more money if it repudiated most of what it believes in. A grand bargain is impossible.

Absent a grand bargain, we are left with a continued war of attrition, where the Europeans keep raising the costs for Greece’s intransigence, but stay just shy of an all-out confrontation. On the Greek side, this is welcome: SYRIZA was elected to clash with the creditors, and the Greek people support a rift—as long as it does not produce any negative consequences like an exit from the Eurozone. In short, Greece will keep raising the stakes while holding a horribly weak hand—all the while doing everything it can to stop the game from ending and the reckoning from taking place. This war of attrition can end in three ways.

The most likely is a cosmetic compromise, similar to the old Communist adage: “We pretend to work and they pretend to pay us.” In this case, it will be “we pretend to reform and they pretend to give us money.” Greece will commit to as few reforms as it can get away with, but not implement them (thus continuing the work of previous governments). It will get some money and maybe even debt relief, but not enough to make a major difference. However, even agreeing to token reforms would challenge SYRIZA’s far-left flank. A compromise could trigger a referendum, a party breakup that leads to elections or a party breakup that leads to a new coalition coming to power (with a smaller SYRIZA joined by other parties). The economy could possible nudge along, but only slowly at best. The long road to recovery would become even longer.

A second outcome would be a Greek default, but without an exit from the Eurozone. In this case, the Eurozone will drag Greece along no matter what, keeping the monetary union intact but with Greece essentially a moribund member. Greek living standards will keep declining, while unemployment and radicalism will continue to grow—unless a new pro-reform coalition emerges, which is unlikely.

Negotiations will still take place, but both sides will hunker down, unable to win and unwilling to lose. This is not a sustainable outcome, but it can last for a while, especially if the Greek government keeps finding creative substitutes for its lack of access to euros (confiscating funds, capital controls, etc.) and the European Central Bank keeps extending funding to the government.

A third resolution would be divorce: a Greek exit from the Eurozone. In theory, neither side wants this, but it is not hard to imagine a scenario where this becomes the most viable outcome. If Greece had to really choose between inflation and political reform, inflation could win. It is easier to print money than to change habits nurtured over decades, especially absent strong political leadership.

On the European side, too, the enthusiasm for continued support for Greece is dwindling, and there is a strong political upside to letting go, despite the knowledge that such a break could have unforeseen consequences for the Eurozone and the European Union in general.

In short, there is no good outcome for Greece anymore, only bad and ugly outcomes. Bad could mean a half-hearted compromise followed by political tension and instability in Greece, or it could mean a prolonged conflict without a clear resolution that drags on. Ugly is the worst outcome—a Greek exit from the Eurozone with unpredictable ripple effects across Greece, Europe and the world.

Nikos Tsafos is a founding partner at enalytica, where he advises leadership teams across the world on energy markets, project development and strategy. He is also the author of Beyond Debt: The Greek Crisis in Context.