Greece's Default Nightmare: What You Need to Know 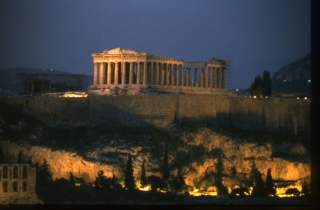 How will the Greek drama end? Now on the precipice of default, the Greeks will undertake a largely symbolic vote on whether or not to accept terms of an agreement that has already expired. All Greeks must vote, and the ultimate outcome is uncertain regardless of a “yes” or “no” vote.

If the vote does lead to some sort of incident, it will be unlike anything markets have witnessed in recent years. This time, the crisis may spread not through financial derivatives, but via a lack of confidence in, and understanding of, the actions of the ECB.

There is even a lack of clarity around exactly what constitutes a default. To begin, the missing of an International Monetary Fund (IMF) payment at the end of June will cause Greece to fall into “arrears”—not default. This means that the IMF can no longer dispense funds to Greece, but Greece would not be in default.

Further, an eventual Greek default does not necessarily imply “Grexit” from the EU or an international financial catastrophe, and does not necessitate leaving the euro. How it all shakes out will depend on the actions of the ECB and internal Greek politics.

From the perspective of international financial markets, the direct and immediate consequences of a Greek default could be quite minute. Almost all of the outstanding Greek sovereign debt is owed to the IMF and ECB—not financial institutions. Some debt appears on the balance sheets of banks, especially Greek banks, but there is little exposure outside of the Hellenic Republic. For the most part, the financial linkages and risks have been placed on the institutions that surround the Greek problems. Depending on the public perceptions in the wake of a default, these institutions could face criticism and questions about their relevance and capabilities. This is where the contagion truly lies.

Greece was forced to shutter its banks and stock markets, because the ECB capped the ELA funds (emergency liquidity assistance—the mechanism the ECB uses to provide liquidity to banks in emergencies) it was willing to provide to Greece. The ECB did the unthinkable in the midst of a crisis and, without shutting, Greek banks would likely have immediately failed.

And here is the true cause for concern—the ECB is the source of uncertainty and instability. Since Greece is on the precipice of a default, a lender of last resort is critical. Typically, this task falls to the central bank. Instead, because the ECB cut additional assistance, and therefore the liquidity necessary for the Greek economy to function, Greece faces life without central-bank backing. Without a backstop, there ceases to be a viable financial system.

The precedent being set by the ECB is disturbing. Not just for Greece—but for other countries in the monetary union who may need assistance at some point. Italy, a country with debt problems similar to Greece, has seen its borrowing costs swell as investors begin to fear the lack of central-bank conviction as a backstop. Confidence is the cornerstone of modern central banking, and the markets may challenge the ECB’s role as a central bank. The ECB appears to be evolving into more of a political tool and less of a central bank.

The trouble for markets is that Greece could be a symptom of a greater problem for the ECB. With the withholding of additional ELA funds from the Greek central bank, the ECB is the immediate cause of the pain being felt on Main Street in Athens. Spain and others must feel as though they are in the cross-hairs. Without the confidence of the market, the legitimacy of the ECB—and more broadly, the euro itself—is called into question.

The effects on the sentiments of other EU member states are a potential source of contagion. This is not the same financial contagion of Lehman Brothers, but a contagion of confidence. Without assurances surrounding their own sovereign debt obligations, willingness to be subject to the whims of a disinterested central bank may diminish rapidly. This applies not only to existing members of the EU, but also to potential members. Instead of financial collapse, a Greek default could spark a euro collapse. The ECB must be careful to not be seen as the reason for Greece leaving, as a crisis of confidence in the ECB threatens confidence in the euro currency.

The financial problems of a Greek default have long been minimized and the debt resides largely on the books of the ECB and IMF. Financially, outside of Greece, a Greek default is a nonevent. However, confidence is impossible to contain, and the ECB is testing the limits of its credibility. Failure of the ECB to maintain its credibility could prove to be the catalyst for contagion.