Greece's Foreign Minister on Trump, Germany and the Future of Europe 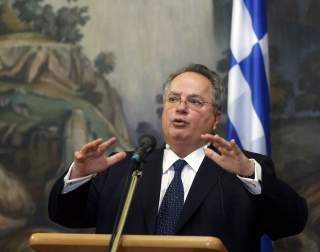 Nikos Kotzias, the foreign minister of Greece since 2015, visited Washington, DC this week to meet with leading Trump administration foreign policy officials, including Secretary of State Rex Tillerson and National Security Adviser H. R. McMaster. He emphasizes that he comes from a different political perspective from the Trump administration but that he respects the outcome of the election and hopes to work smoothly with the administration. His remarks about Germany, Turkey, Russia, the refugee crisis and the conflict in Syria are also noteworthy for their clear stands. With the European Union at a crossroads about its future, Kotzias’s remarks about the need for a clear plan of action are particularly timely.

He took time out from his schedule to arrange an interview at the Greek embassy in Washington, DC with National Interest editor Jacob Heilbrunn. Kotzias made it clear at the outset that he is an ardent admirer of the National Interest, which he has read for several decades. In particular he singled out its essays focusing on the future of the West, which began appearing in the 1990s.

Jacob Heilbrunn: Does the West have a future?

Nikolaos Kotzias: The West can have a positive future only if we use our capacities in a smart way. Second, it must work hard enough to form new identities, and third, it has to find the best possible solution and implement it. If the West does not work on a new program or any alternative scenarios and does not have the ability to implement the scenario we choose, then there is no future. I think that there is a future for the West only under these three conditions.

NK: Yes Greece was hit very hard. And the refugees were hit hard too.

After January of 2015, I had warned that we would have substantial problems with the refugees and economic migration because the UN and the EU were reducing the money earmarked for the camps in Southern Lebanon. And nobody was listening to me. The European press was carrying out a campaign against me. I was describing a problem and they closed their eyes, chose not to recognize it, and they blamed the messenger instead of focusing on the real problem.

JH: Do you think that Chancellor Merkel exacerbated the problem? Made it worse?

NK: I think Angela Merkel was at the time focusing more on the financial crisis in Europe and the Ukraine problem and failed to see the refugee problem.

JH: What is happening in Europe with the rise of these anti-immigrant movements? What is your assessment?

In the EU, we have a deficit of leadership. There is not enough democratic discussion on what type of Europe we want for the twenty-first century. The EU has some useful tools, but not all of them are useful for the future. There are many young people going to school and hearing that the EU can sanction nations, then they hear it can impose an embargo on nations, then they hear that Greece is facing austerity. When you see the whole picture, the EU is not so attractive, if only reduced to these instruments. This is why we need to discuss the vision of the EU, to focus on our values and democracy. The populist movements are on the rise because this discussion never took place.

The second issue pertains to the multiple crises in the union: Brexit, eurozone crisis, refugee problems. I believe that there are individual crises, but they all stem from a leadership crisis in the EU. If we tried to create a system based on rules and European values, things would be much better.

Third, the European leadership needs to realize that there are losers in the globalization process. The political forces need to focus more on the problems of the workers, on the concerns of the middle class. The members of the middle class are scared they will lose their jobs and need reassurance and answers. The problem is that politicians are not answering the people’s questions. The longer we delay the answers to the people, the more they will turn to populists or far right groups. We also underestimated the future. We thought the U.S. would decline and that the twenty-first century would be a European century. America is not in decline. Southeast Asia is also rising. Europe is not as important as the Europeans thought it would be, and its leadership is not happy. There is also too much bureaucracy and not enough investment in people, in the Second Machine Age and in the future.

JH: Another problem you have is relations with Russia. What is your stance on the future of sanctions toward Russia?

JH: One of your neighbors that is not part of the European Union, Turkey, has been making a lot of noise. What do you think about Erdogan’s recent comments about Nazis?

NK: Since I became Minister of Foreign Affairs of Greece, I’ve been dealing constantly with issues related to Turkey. Look back to the classical balance of power Bismarck wanted and shaped. After his departure, Germany became nervous because the balance was gone. With whom would Germany make an alliance? The German nervous power of the previous century is Turkey today. There are many political and social contradictions in Turkey, many different religions and many economic contradictions.

One side in the government seems to be insecure. The other side in the government is arrogant. This combination of fear and arrogance is making the regime even more nervous. They need though to respect the other nations. With regard to the Nazi comments, I must say that the killings that Nazis organized were beyond genocide. It was like an industrial process. That is unique in human history. When you start dealing with every problem with this mentality—that is, calling everyone you don’t like “Nazi”—then you are underestimating what the Nazis did and downgrading their crimes. Very frankly, you are normalizing what they did.

JH: What do you think is Germany’s role in the EU right now? Do you think Berlin is still too bent on austerity and that its policies are crippling the economies of the south?

NK: We have been arguing during the negotiations for the future of the EU since the 1990s about the need to upgrade democracy in the EU and enhance the role of the European Parliament. After the euro crisis, the parliament lost power for the benefit of informal institutions of the EU that are not democratic: the eurozone and the euro group. The parliament is not participating in the decisionmaking in these fields, so in reality there is a formal structure that is democratic, and an informal system where the parliament has no power. The structure of power is based on economic, not political or democratic power. Thus, the Germans are the strongest; they have a leadership role and they call for more and more austerity in Greece. They believe that Greece must be punished because of the behavior of its elites.

The big question is: what do the Germans themselves think? Germans had accumulated a massive debt after both World Wars. After the London Conference in the 1950s, the Americans realized that the creditors and Germans needed to find a compromise. They realized that Germany could only pay back her debt if there was growth. That was a win-win situation. If Germany grows, then creditors can get their money back. Now people talk about how good the German economy is, but forget that they had debt relief by the Americans because of Washington’s good will. Although the Germans committed many crimes during the war, the Americans were generous to them afterwards so that there could be growth.

But the Germans have not been so kind to us and haven’t treated us like the way Americans treated them. Germany does not want growth; they just want to suck Greece dry. Germans are not paying high interest rates for their own loans; there are companies that are getting very low rates in the country. Making it, thus, easier only for Germans. Germany is part of the problem since they have interests in the EU, but they fail to think constructively for the common interest of the EU member states.