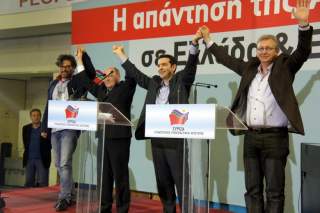 Syriza has failed. Elected six months ago on a promise to ease the domestic costs of Greece’s gargantuan burden of debt, the government of Alexis Tsipras has now caved in to most of its creditors’ demands—albeit after a spirited struggle to avoid this fate. Still, the Eurozone’s finance ministers ought not to feel too triumphant; for while they might have succeeded in forcing austerity down the throats of the recalcitrant Greeks—pending parliamentary approval soon, that is—there is a very real sense that Syriza’s failure is Europe’s failure too. What is more, the effects of that failure could be quite profound.

Syriza’s non-fulfillment has not been for a lack of trying on its part. For months, rational economic arguments have been married with emotional appeals to European solidarity. Its leaders even tried to gain leverage over the rest of the eurozone by dallying with Russia’s Vladimir Putin, hardly a natural comrade for leftists. Most dramatic, of course, was Tsipras’s surprise referendum gambit—a populist move that seemed for a moment to bring Greece to the brink of “Grexit.” Syriza has been nothing if not creative in its bid to find wiggle room vis-à-vis its creditors.

To many lay onlookers, it has appeared as though Syriza has had common sense and basic decency on its side, too. It is obvious that Greece cannot afford to repay its burgeoning obligations in full. And, in any case, it seems wrong to expect ordinary Greeks to pay the price of an economic crisis that they had no knowing part in creating. Gutting the Greek welfare state and deregulating its labor market are hardly compassionate responses to a friend in need. The forlorn hope of Syriza’s negotiators, perhaps, was that grassroots empathy across Europe would overwhelm the eurozone’s less compassionate leadership.

Of course, charitable observers will be able to recognize that the principal brokers within the eurozone—Angela Merkel chief among them—are not driven by indifference or cruelty, but rather by the material interests of their own constituents. Because despite all the talk of European unity, it is to non-Greeks that the leading figures within the troika of the IMF, European Commission and European Central Bank owe their political allegiance. The citizens of rich countries like Germany but also poor countries like Latvia and Lithuania can be forgiven for wondering why the burden of bailing out Greece should fall on their shoulders.

As Yanis Varoufakis recently argued, Syriza failed in its six-month bid to extract more favorable terms from its creditors because of this cold political reality: because, in the final analysis, the people that Syriza has been charged to represent are not important enough to force the troika to think again. Despite some signs of movement on behalf of the IMF, the eurozone’s heads of government and finance ministers have been resolute that their job is not cater to Greece’s needs alone, but rather to act in ways that satisfy a broader array of interests—lenders, yes, but also their respective national electorates, which if push came to shove might not thank them for transferring yet more resources to Greece.

The reason is this: if not Syriza, then who?  Since 2008, Greece has already seen governments of the right and left—not to mention the supposedly non-partisan technocratic ministries of the recent past—ousted for appearing to mishandle the country’s financial troubles. If the Greek electorate resolves to condemn Syriza to the same fate after its failure to reach a modus vivendi with the troika, who will remain to fill the void?

With Greece’s established political class discredited and the (now fractured) populist left shown up as impotent, the scene is set for some even more turbulent times in Greek domestic politics.  Although its promises might have been unrealistic, Syriza at least offered Greeks hope. It can no longer credibly do so. Yet it is only a matter of time before others take up the populist mantle, eager to make political hay out of Greece’s 25 per cent unemployment rate and the humiliating cuts that have been imposed by outsiders. If Greece’s creditors, neighbors, friends and allies aren’t exactly enamored with Syriza, they should not kid themselves that there are not less palatable alternatives waiting in the wings.

Counterintuitively, then, it could be considered a major dereliction of duty that Greece’s creditors have refused to allow Syriza the space to deliver on the home front. The macro-level choice facing Greece’s international creditors has been a relatively simple one: to accept the cost of caving to Syriza’s parochial yet exigent—and eminently understandable—demands to improve the lot of the Greek people, or to forsake the political stability of Greece (and perhaps, in time, some of its neighbors) by insisting that Syriza must fail.

Make no mistake: they have chosen the latter option, refusing to invest in Tsipras as an interlocutor who might feasibly have put Greece on an even keel, albeit on sub-optimal terms from the troika’s perspective.

And so while it might be tempting to portray recent events as a literal Greek tragedy, the product of unfortunate political circumstances that have railroaded the country into an abyss despite the forgivable intentions of politicians on either side of the negotiating table, this would be to miss the very real political calculations that have driven Greece’s fate. Yes, Syriza’s grandstanding is partly to blame for worsening Greece’s standing, but the creditors’ decision to eschew magnanimity and to force humiliation and failure upon Tsipras and Syriza cannot be easily excused. Especially if Syriza’s domestic coalition crumbles—as looks likely—and a power vacuum is created in Athens, the events of recent weeks might be looked back upon as the proximate cause of a political crisis that the whole of Europe might live to regret.

Europe has seen this story before: a country humiliated and in dire economic straits that finds itself crucified by the “beggar thy neighbour” policies of its supposed partners; a country that lurches from governments of one orientation to the other, desperate for solutions.  It is not a story that ends well. Indeed, it is a story that the European project was supposed to author a different ending to.