Is Green Day Coming to Germany? 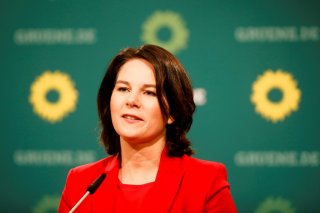 For several months, Annalena Baerbock has been the It Girl of German politics. Baerbock, who is the Green Party candidate for chancellor, has been widely touted as a successor to Angela Merkel. Her party has stood roughly at parity with the conservative Christian Democratic Party at about twenty-nine percent in the polls. There are even rumors that Merkel would prefer to see Baerbock succeed her rather than a candidate from her own party.

But as the election season starts to heat up—the federal election is on September 26—both the Greens as well as the Christian Democrats are starting to come under pressure. A Bild Am Sonntag poll indicates that the Greens’ national support has dropped to twenty-two percent. Baerbock, the Financial Times noted, has made a number of unforced errors recently, including stating that short-haul flights should be banned: “she meant domestic flights should be replaced by train travel. But in a country obsessed with quick flights to Spain’s Mallorca…the damage was done.”

Apart from such stumbles, an upcoming state election in Saxony-Anhalt may prove telling about the composition of Germany’s next government. The difficulty for Merkel’s party is that it has to fight a two-front war — fending off the Greens in the West and the far-right in the East. The Christian Democrats are playing with fire in the East: Marco Wanderwitz, a parliamentarian, recently declared on a podcast, “We're dealing with people who have partly been socialized by a dictatorship in such a way that they haven't yet arrived in democracy even 30 years later." It was an imprudent statement. Such loose talk is likely to bolster the fortunes of the Alternative for Germany, which functions as a protest party for those in the East who continue to resent western Germany and regard it as a colonizing power. Voting for the Alternative for Germany, which has attacked the Covid-19 lockdown and decried a multi-cultural society, allows disaffected easterners to thumb their nose at the regnant elites in Berlin. No less than America, Germany is riven by populist political fault-lines that show no signs of disappearing.

Armin Laschet, who is the current Christian Democratic candidate to succeed Merkel, needs a strong showing from the state election to bolster his chances in September. Laschet is a moderate. Right now, the Christian Democrats are trying to fend off a resurgent Alternative for Germany, which is polling at around twenty-three percent in a recent ZDF poll. The Christian Democrats are polling at thirty percent. But other polls show the Alternative party coming in first, which would come as a real blow to the conservatives. If that occurred, the Christian Democrats might well dump Laschet and look for another candidate—perhaps Markus Soeder, the hard-line minister-president of Bavaria—to shore up its right flank. If Laschet’s appeals to voters on behalf of supporting democracy prove effective, however, he will be set for the elections.

And the Greens? They may score well in the state election. But they could still be shut out of the government if the Christian Democrats form a new coalition government with the Free Democrats and Social Democrats. The apprehension of the Greens is that such a coalition would serve as a model for a coalition on the federal level in September. Even if they score well, the Greens might be excluded from a new coalition. After 16 years of the Merkel regime, Germany is headed, nolens volens, for change. Come September 26, Germans will decide if it really should be Green Day or not.