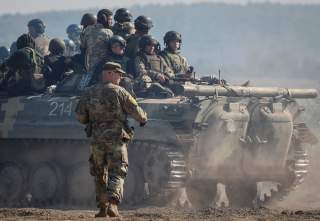 THE WAR between Ukraine, Russia and Russian-backed separatists in Ukraine’s Donbass region has reached its sixth year. So far, it has claimed some thirteen thousand lives and displaced millions of people. It threatens to create an unstable line of long-term confrontation between Russia and the West dividing the heart of central Europe, or even spiral into a broader conflict. With so much at stake, are American government experts on Ukraine vigorously debating how to handle this daunting challenge more effectively? Not a chance.

The lack of any significant contention about Ukraine is reflected in the term groupthink, which first entered our political lexicon in the 1970s, when American policymakers and academics struggled to understand why the national security elite’s conventional wisdom about the war in Vietnam turned out to have been so wrongheaded. The term’s popularity enjoyed a fresh vogue in the wake of the Iraq wmd debacle, when numerous postmortems determined that analysts had been so convinced that Saddam Hussein was hiding stockpiles of chemical and biological weapons that they “simply disregarded evidence that did not support their hypotheses.” The few policy advisors who attempted to warn the White House that the destruction of Baathist Iraq would also destroy the balance of power in the Persian Gulf—vital to containing Iran—were shown the door. But seldom has contemporary evidence of groupthink been on such stark public display as during the House impeachment hearings regarding Ukraine.

The star witnesses testifying in the hearings may have differed over the central question of whether the U.S. president delayed American military assistance in order to press for inappropriate political favors, but they all sang from the same sheet of music about the challenge that the United States is facing in Ukraine. Ukraine, they agreed, is “on the frontlines of a strategic competition between the West and Vladimir Putin’s revanchist Russia” and therefore must have robust U.S. backing. They described this competition as in part a military struggle that requires continuing flows of American military assistance for Kyiv: “We are fighting Russia in Ukraine so that we do not have to fight Russia in the United States.” But they also see it as ideological. A “free and democratic Ukraine” is a natural ally for “the United States and Western-style Liberalism,” according to these experts. Ambassador Kurt Volker, the U.S. special envoy to Ukraine, best articulated this consensus view:

[The U.S. national interest in Ukraine] meant pushing back on Russian aggression and supporting the development of a strong, resilient, democratic and prosperous Ukraine—one that overcomes a legacy of corruption and becomes integrated into a wider trans-Atlantic community. This is critically important for U.S. national security. If Ukraine, the cradle of Slavic civilization predating Moscow, succeeds as a freedom-loving, prosperous and secure democracy, it gives enormous hope that Russia may one day change—providing a better life for Russian people, and overcoming its current plague of authoritarianism, corruption, and aggression toward neighbors and threats to NATO allies and the United States. The stakes for the United States in a successful Ukraine could not be higher.

THE LOGIC seems so reasonable as to be beyond any debate. And if we are to believe the witnesses, it is beyond debate. They testified that there has long been a bipartisan interagency consensus on all these points, and their clear implication is that because there is a strong consensus, these views must be correct. The National Security Council staff’s director for Ukraine, Alexander Vindman, put it this way: “The National Security Council’s consensus view tends to be the best, most informed judgment across … the U.S. government.” He referred explicitly to this interagency consensus almost three dozen times in the course of his testimony, warning against departures from it.

Nonetheless, as our debacles in Vietnam and Iraq demonstrate, expert consensus does not always add up to real-world success. In fact, U.S. policy regarding the conflict in Ukraine has long been steeped in illusions. This failure is not primarily the result of poor political judgment, poor administration or poor personnel management in the White House, although it is glaringly evident that Team Trump suffers from of all these flaws. Nor does it stem from politicization within the “deep state” or other forms of bureaucratic resistance, although there is evidence of these maladies as well. America’s approach to Ukraine is failing because the interagency consensus that the witnesses so unquestioningly proclaim rests on several critical assumptions that crumble upon contact with the hard realities of Ukraine and Russia.

The first and most important assumption is that Ukraine can be integrated into a NATO-dominated trans-Atlantic community and still remain intact and at peace with itself. This belief turns a blind eye to several uncomfortable truths. In fact, there is little support for Ukraine’s NATO membership among Europeans, many of whom correctly fear that such membership would court military conflict with Russia. Moscow has already demonstrated that it will fight back against NATO’s expansion into Ukraine through a combination of direct military intervention, information warfare and subversion. There is every reason to believe it will continue to do so for as long as necessary. As Henry Kissinger has observed, “to Russia, Ukraine can never be just a foreign country.”

Even more fundamentally, however, there are cleavages within Ukrainian society itself regarding Russia and the West. The closer Ukraine comes to joining the transatlantic community, the more Russian-speakers in its eastern regions will push back against Kyiv; the closer Ukraine comes to joining Russia-dominated arrangements in the east, the more Ukrainian nationalists in its western regions will resist. Moscow did not create the separatist movements in Ukraine’s Donbass region from whole cloth, just as Washington did not create the earlier Maidan uprising. Any approach to Ukraine rooted in the belief that the country as a whole can be pulled into the exclusive orbit of either the West or Russia will fail.

The corollary to this assumption is the belief that U.S. military support for Ukraine deters Russian aggression and increases the likelihood of peace. Our approach to Georgia in 2008 was based on a similar assumption. Convinced that Russia had designs on Georgian territory, we stepped up military assistance to Tbilisi, declared that Georgia would one day become a NATO member, and warned Moscow repeatedly against aggression, believing that this firm support for Georgia would prevent a war. In fact, it inadvertently encouraged one. The Kremlin grew alarmed by the prospect of NATO expansion; Georgian president Mikheil Saakashvili grew convinced that his country was so important to Washington that he could retake the separatist enclave of South Ossetia by force without fear of American abandonment, despite explicit U.S. warnings against such a course. The result was a war that Georgia lost decisively.

THE CONFLICT was not the first time that U.S. experts have badly misread foreign intentions and miscalculated what would deter aggression. Dean Acheson described in his memoirs another noteworthy example of a mistaken mindset among American experts in the run-up to Japan’s attack on Pearl Harbor:

Everyone in the Department – and in the government generally – misread Japanese intentions. This misreading was not of what the Japanese military government proposed to do in Asia, not of the hostility our embargo would excite, but of the incredibly high risks General Tojo would assume to accomplish his ends. No one in Washington realized that he and his regime regarded the conquest of Asia not as an accomplishment of an ambition but as the survival of the regime. It was a life-and-death matter to them. They were absolutely unwilling to continue in what they regarded as Japan’s precarious position surrounded by great and hostile powers – the United States, the Soviet Union, and a possibly revived and restored China.

It constitutes a repetition of those errors today to assume that Putin regards the war in Ukraine as a discretionary ambition rather than as an imperative linked to the survival of Russia itself. The interagency belief that we can change Russia’s approach by making its continuation of the war more costly and more painful fails to account for this reality.

The third assumption is one that has been central to American foreign policy thinking since the collapse of the Soviet Union—the notion that U.S. security can and must be based on a transformational agenda abroad, one that attempts to change the internal governance and political cultures of foreign states so that they become freer, more democratic, more Western and, therefore, less likely to go to war with us or each other. The interagency consensus asserts that transforming Ukraine (and ultimately, as Volker suggests, transforming Russia) in the image of the United States not only will provide Ukrainians with better and more prosperous lives, but it will make Europe and the United States more united and more secure.

This belief underpins our chronic tendency to view U.S. interests in Ukraine as little more than a function of its progress along a continuum stretching from authoritarianism to free-market democracy. Are Ukrainian elections getting freer and fairer, or are they becoming less democratic? Is corruption lessening or increasing? Is the rule of law solidifying or foundering? We ask such questions to determine whether Ukraine and its leaders are proceeding on the right (pro-Western) or wrong (pro-Russian) track. Americans have grown so accustomed to viewing foreign states through such a lens that they cannot recall a time when we used any other prism for understanding developments or formulating U.S. policy.