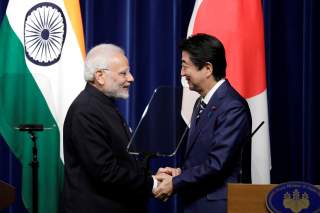 The India-Japan agreement for cooperation on the peaceful uses of nuclear energy went into force in July 2017. It was first such pact ever by Japan with any country not party to the Nuclear Non-Proliferation Treaty—an extraordinary exception from the only country ever to have been attacked with nuclear weapons.

Although noteworthy, Japan’s nuclear exception was not surprising. It was another milestone in a series of historic accommodations and strategically significant activities between Tokyo and New Delhi demonstrating the steady growth of a substantive and significant strategic bilateral partnership.

This emerging strategic relationship between India and Japan is significant for the future security and stability of the recently coined “Indo-Pacific Region.” It also is a critical development for both Beijing and Washington. India possesses the most latent economic and military potential of any state in the wider Indo-Pacific area. For Japan, an expanding partnership with India serves as a hedge against a China acting to challenge the existing post-World War II, rules-based, international and regional order. Together, the two countries will have much to say about the future trajectory of China’s ascent. They also will have a significant voice in defining and establishing the rules of the Indo-Pacific Region, shaping how that enormous geopolitical space will evolve over the coming few decades.

India and Japan share complementary, but not identical, strategic visions. New Delhi and Tokyo both seek to manage—and minimize—the potential negative impacts from the rise of China in accord with their own strategic perspectives. Japan perceives China’s increasingly assertive actions to be a great and growing strategic threat. India, for its part, is concerned about China’s increasingly worrisome behavior, but finds itself relatively more dependent upon China for economic growth and less worried about China’s immediate physical threat than Japan. As a result, India has been—and will continue to be—less vocal in complaints about Chinese behavior, preferring to warn Beijing with subtle signaling and actions.

The India-Japan strategic partnership has yet to garner much attention in Washington during the Trump administration, but it should. Inevitably, any U.S. administration that wishes sustained influence in the Indo-Pacific must do so with an eye toward help from traditional and emerging security partners. Japan is a traditional security partner and India an emerging one. Americans should become more familiar with the backstory and contemporary economic, political and security manifestations of this rapidly evolving and very significant strategic partnership.

The India-Japan relationship is not new: it dates back centuries, involving both cultural and commercial interactions. Buddhism came to Japan from India in the sixth and seventh centuries. The first direct economic contact can be traced to the beginning of Japan’s Meiji period in 1868, when Japan used raw materials from India to enable its early industrialization. The relationship was rejuvenated in 2000 and has become increasingly strategic in orientation since 2006. Modern forces are driving this relationship forward, including the rise of China, the promise of India and the re-emergence of Japan as an active contributor to international peace and stability.

In the first phase, Japan and India maintained a cordial relationship but remained at a political distance. India practiced leadership of the Nonaligned Movement while Tokyo was closely aligned with the American-led, anti-Communist, anti-Soviet bloc. U.S.-India antipathy—and the distance between Tokyo and New Delhi—grew greater after India’s Treaty of Friendship and Cooperation was signed with Moscow signed in 1971. This first phase came to a rather frosty end after India’s nuclear tests of 1998 and the Japanese decision to join Washington and impose economic sanctions against New Delhi.

The second phase of the relationship began in the first year of the new millennium and continued through the end of 2005. It commenced with the historic visit of American president Bill Clinton to India in March 2000—the first by a U.S. president for more than twenty years. Taking a cue from the Clinton visit, Japanese prime minister Yoshiro Mori traveled to New Delhi in August 2000, where he announced the Japan-India Global Partnership. Since then, prime ministers of both the Liberal Democratic Party and the Democratic Party of Japan have visited India. Beginning with the visit of Prime Minister Junichiro Koizumi to India in 2005, Japanese and Indian prime ministers have held annual, alternate-host summits. On the security front, the Indian and Japanese Coast Guards began annual joint exercises and leadership exchange visits in 2000.

By late 2006, a third and much broader phase of strategic engagement began between India and Japan. The phase evolved in parallel with greater defense and security engagement by the U.S. presidential administration of George W. Bush with India under the aegis of its “dehypenation policy.” Japan-India relations became increasingly geostrategic in nature.

During the period of Abe’s first government, he and Indian prime minister Manmohan Singh signed bilateral agreements that moved the Abe vision toward reality. In 2006, India and Japan signed their first-ever bilateral Defense Cooperation Agreement. That same year, the two countries signed a document formalizing their relationship as one of “Strategic and Global Partnership.” In a speech before the Indian parliament in August 2007, Abe laid out a construct called “Confluence of the Two Seas.” In it, Abe asserted that India and Japan had a unique and special role, and responsibility, to see this vision attained.

Abe’s resignation for health reasons in September 2007 did not arrest the positive trajectory of bilateral relations. They continued to expand steadily, if not as vigorously. Strong cultural, economic and political forces drove forward the relationship. The looming specter of China’s ongoing military modernization required that the two nations collaborate on managing the potential challenge posed by Beijing.

Abe’s return as Japanese prime minister in December 2012 set the stage for even greater acceleration in the third phase of the Indo-Japanese bilateral relationship. India signaled its deep commitment to Japan as a strategic partner by making Abe the first ever Japanese dignitary to be the chief guest at India’s Republic Day in January 2014—India’s highest diplomatic honor. That spring, Indian elections brought Narendra Modi of the nationalist Bharatiya Janata Party to power, and the bilateral relationship took a dramatic spring forward.

Prime Minister Modi visited Japan in September 2014, making this his first bilateral visit outside of South Asia. On this trip, India and Japan officially updated the description of their relationship to one of a “Special Strategic and Global Partnership.” Japan and India moved forward on greater cooperation in long-sensitive space and defense matters. India also joined Japan in expressing concern about developments in the South China Sea.

High-level diplomacy and strategic interactions accelerated again in 2015 and 2016. Japanese investment in major Indian economic projects took off. On his December 2015 visit, Abe inked Japan’s commitment to funding and building India’s first-ever high-speed railway, along with protocols to enable the future transfer of defense equipment and technology. India and Japan also agreed on joint measures to protect classified military information—a commitment essential to greater technology transfer in the future. India agreed to Japan’s permanent inclusion in the bilateral, annual U.S.-Indian Malabar naval exercises. Bilateral interactions in 2016 included a very significant bilateral civil nuclear deal, signed in early November by Modi on a visit to Japan. This deal opened the way for Japan’s highly capable nuclear reactor businesses, like Toshiba, to build nuclear power plants across India and sell nuclear reactor parts and equipment to other contractors there.

India’s metamorphosis as a modern Asian-engaged nation began in the early 1990s. In 1991, India confronted simultaneous, related crises that demanded a re-think of its decades-old Nonalignment strategy. The first crisis was economic, in the form of a severe balance of payments crisis. The second crisis was geostrategic. India’s principal security and economic partner from 1971–1990, the Soviet Union, collapsed. India lost Soviet subsidies, customers and suppliers in Russia and across the fragmenting Soviet bloc. It also lost its ability to stay distant from the global first world economy led by the United States and Western powers.

Indian prime minister P.V. Narasimha Rao announced an alternative economic model in 1992: the Look East policy. This was the start of India’s efforts to cultivate extensive economic and, later, strategic relations across Southeast Asia at first, and then the wider Asia-Pacific region. It led India to pursue economic modernization and integration into the wider capitalist trade and finance framework.

Japan was a natural partner for India’s Look East policy, although relations between the two expanded only slowly at first as New Delhi’s immediate Look East focus went toward relationships with Southeast Asian states. During the 1990s, India did increase its economic ties with Japan. But significant political and strategic potential went uncultivated throughout the decade, especially after India’s 1998 nuclear weapons test.