A Guide to the Risky Promises in Obama's Iran Deal Speech 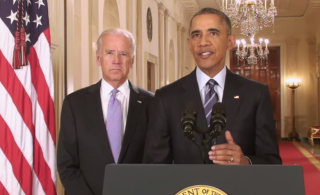 One sentence, even one phrase, can set a politician’s legacy in public memory forever. If a leader plainly states that something is so, and it plainly is not, people will remember it for years. “Read my lips,” said George H. W. Bush, “no new taxes.” New taxes followed, as did Bush’s defeat in the next election. “We still seek no wider war,” said Lyndon Johnson after the Gulf of Tonkin incident. His presidency and his legacy were then ruined by a vastly widened war in Vietnam. “I did not have sexual relations with that woman,” said Bill Clinton. Months later, he revealed that wasn’t true; similar statements in a deposition led to his impeachment. Across the pond, Neville Chamberlain said he believed the deal he’d made with Hitler at Munich was “peace for our time.” Six months later, the Munich agreement was broken as the German army rolled into Czechoslovakia; eleven months later, Chamberlain’s United Kingdom was pulled into one of history’s deadliest wars.

Barack Obama is surely familiar with this phenomenon—witness “if you like your doctor, you can keep your doctor.” That’s what makes his speech this morning defending his Iran deal remarkable: he didn’t shy away from clear statements that will certainly haunt him if the deal fails. Six of these were particularly risky.

This deal “will prevent [Iran] from obtaining a nuclear weapon.”

If the deal is implemented successfully and Iran keeps its promises, Obama will be proven right. It’s almost unimaginable, at this point, that Iran will obtain a nuclear weapon in the next several years, and that’s a direct consequence of this deal. For Iran to back out in the near future would make it look downright mendacious. But much of the deal is necessarily temporary. As the temporary elements begin coming off over the next two decades, Iran’s nuclear efforts will have more legitimacy. The great fear is that Tehran will use that legitimacy to expand its nuclear program before finally breaching its international commitments and rushing the rest of the way to a bomb before Washington can act. That’s not impossible. However, if this happens, Obama’s legacy might not be utterly shattered—for if Iran’s goal all along has been a nuclear weapon, this deal will have at least delayed them on the way. (The prudence of that delay is a separate question that I’ll address shortly.) But Obama didn’t promise a mere delay.

“We have stopped the spread of nuclear weapons in this region.”

Some of Iran’s neighbors, particularly Saudi Arabia, have expressed great alarm about the negotiations and Iran’s nuclear progress. The Saudis have said that they want whatever Iran gets, and there have also long been rumors that they’ll try to buy a bomb from Pakistan. So if Iran’s long-term plans prove nefarious or regional actors simply don’t accept the deal, that spread may still occur. However, we shouldn’t overstate the current risk of that happening. An indigenous Saudi nuclear program would face lots of obstacles, particularly as the modern nonproliferation regime will make it hard for them to acquire the necessary tools. The program would also require an enormous investment of resources, and though the Saudis are rich, low oil prices, a growing population and a more troubled region are already putting their coffers under strain. A nuclear program would be expensive and almost certainly wasteful—although the same things are true of Iran’s nuclear program, and that didn’t stop them.

A Saudi purchase of a nuclear weapon would also be uncertain, for buying something is not a unilateral act. The Pakistanis must sell it to them. That sale would come with serious consequences for Pakistan. The fact that Pakistan recently refused to join the Saudi-led intervention in Yemen suggests that the country does not see its security policy in purely financial terms, which can’t be comforting to any Saudi leaders in the market for a bomb.

“Because of this deal, Iran will not produce the highly enriched uranium and weapons-grade plutonium that form the raw materials necessary for a nuclear bomb.”

The text of the deal appears to only put clear restrictions on enrichment levels for fifteen years, although there may be something more explicit in forthcoming voluntary commitments by Iran. If Iran were to build a bomb someday, it’d render this Obama promise false in the process. Even if, as some believe, Iran doesn’t actually want a bomb but does want an ability to build one relatively quickly, this promise may still be broken. There are also legitimate (but often dubious) peaceful uses for highly enriched uranium, uses which this deal and Iran’s other commitments don’t appear to conclusively block. That question may develop an unpleasant relevance in fifteen years, although it reflects a weakness of the nonproliferation regime rather than the final Iran deal.

“Inspectors will also be able to access any suspicious location—put simply, the organization responsible for the inspections, the IAEA, will have access where necessary, when necessary.”

This was an extremely contentious point in the negotiations, and the text of the deal will need to be closely examined to see precisely what Iran has agreed to—it appears that access to contentious sites, while effectively guaranteed, would require up to twenty-four days and some level of international consensus (at least five of eight members of a joint commission) to go through. Further, we must naturally fear that Iran may, like Saddam’s Iraq, take measures to hinder the inspectors’ work; these measures might stretch the limits of what is allowed under the deal. Iran may also deliberately create ambiguous situations that make that partial international consensus harder to get. Further, the necessity of partial international consensus links the success of the deal to factors outside the talks. While Russia, for example, did not seem to change tack on the nuclear talks when its relations with the West soured over Ukraine, can we be sure that Iran will never benefit from a mix of ambiguity and international tensions in the inspection-arbitration process? (In case it’s not clear yet, this point is highly complex, so a breach of Obama’s promise here might not be cut and dry.)

“If, in a worst-case scenario, Iran violates the deal, the same options that are available to me today will be available to any U.S. president in the future.”

This is trivially true—America will, presumably, still have a mighty military for many years to come, and so future presidents will retain the option of attacking Iran. But will the military balance between us and them be the same? Will our forces still be able to operate near Iran with the same level of security? The arms embargo against Iran appears set to come off in five years, the ballistic-missile measures in eight. Might Iran buy weapons then, or develop weapons before then, that make exercising the U.S. military option even riskier and more difficult? In other words, might Iran use the period of the deal to build up conventional forces that make the deal harder to enforce? Rapid advances in the field of antiaccess/area-denial (A2/AD) warfare are already calling America’s ability to wage war near China into question. Might Iran, perhaps with Chinese help, put the safety of American vessels in the Persian Gulf and Gulf of Oman in doubt? If this proves true and Iran breaks the deal and rushes for the bomb, we may be drawn into a bloodier war than the one we’d face now. A future U.S. president facing such a scenario may not feel like she really has the same options available to Obama today.

“We will continue the work we began at Camp David to elevate our partnership with the Gulf States to strengthen their capabilities to counter threats from Iran or terrorist groups like ISIL.”

We can sell the Gulf States more guns and fancy weaponry, but full cooperation is less certain on a critical point: the Iranian threat to Gulf States’ internal security. Many of the Gulf States are repressive and socially fractured. Unrest is quite possible without any Iranian involvement, and no American president would find it easy to back a bloody crackdown on, say, largely peaceful demonstrations for human rights. On the other hand, Washington might support a Gulf State putting down an openly Iranian-directed uprising. But what if it’s less clear that Iran is pulling the strings? What if Iran seeks to take advantage of protests that Washington sees as legitimate? Can the Gulf count on us then? Would they trust us if we said they could?

Those six promises may determine how history views Obama’s Iran choice. If they are honored, Obama will indeed deserve praise, and that Nobel Peace Prize he got back in 2009 will look more merited. If they’re broken, he’ll be shamed. The Obama team clearly already knew that, which may explain his candor; indeed, if history does judge him unkindly, it may note that he and his administration conducted these talks with too much of an eye to his own legacy. A key Obama national-security advisor told a private gathering of progressive groups last year that the deal “is probably the biggest thing President Obama will do in his second term on foreign policy. This is healthcare for us.” Obama himself said that “twenty years from now, I’m still going to be around, God willing. If Iran has a nuclear weapon, it’s my name on this [deal].” He added, “I think it’s fair to say that in addition to our profound national-security interests, I have a personal interest in locking this down.” Thirsty? We’ll see.