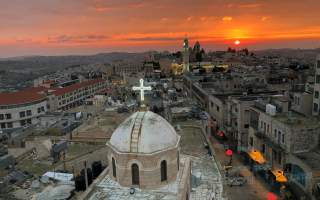 The trickle of outreach between Israel and the Arab Gulf states became a torrent in 2018. While an open partnership remains elusive, the unprecedented volume of activity bodes well for what 2019 could hold in store.

The biggest and most overt display of Israeli-Arab rapprochement came with Israeli prime minister Benjamin Netanyahu’s visit to Oman in October, where he met Sultan Qaboos. Though former Israeli prime ministers Yitzhak Rabin and Shimon Peres made trips to Oman in the 1990s, this trip was much more visible and the first official visit since the Second Intifada. Soon after Bibi’s visit, Israel’s transportation minister arrived in the sultanate to speak at a conference.

Oman is not alone in warming up to Israel. In a significant move, Bahraini foreign minister Khalid bin Ahmed Al Khalifa publicly backed Israel’s right to defend itself from Iran and its proxies, a call he reiterated when Israel discovered Hezbollah tunnels under its northern border in December. Recently, he supported Australia’s decision to recognize western Jerusalem as Israel’s capital. Elsewhere in the Gulf, the UAE reportedly hosted Israel’s chief of staff twice in late 2018, soon after the country hosted Israeli judokas and Israel’s minister of sports and culture—the first official state visit to the federation by an Israeli minister. Echoing the theme of firsts, the UAE became the first Arab country to play Israel’s national anthem at a sporting event.

Even Qatar, one of Hamas’ main financial backers, seems to be growing closer to Israel. Israeli Ambassador to the United States Ron Dermer specifically thanked Qatar for its role in alleviating Gaza’s humanitarian situation. Qatar, like the UAE, hosted Israeli athletes in late 2018.

There are several likely reasons for this unprecedented flurry of activity. Iran is the most obvious rationale, given that both Israel and the Gulf states view the mullah regime as an existential threat. But perhaps the specter of a post–oil future is as equal an explanation. The oil-price collapse, in fomenting the feelings of internal insecurity harbored by the Gulf states, likely kick-started a rethink of the Gulf’s traditional foreign policy. This pushed Gulf states to establish new regional relationships to help buttress their security when their oil clout runs out.

Despite this year’s significant progress, full normalization is not within reach in the near-term, as long as the Palestinian issue remains unresolved. Gulf states have invested significant political capital and money portraying themselves as fighters of the Palestinian cause. Normalizing without a peace plan will likely generate significant—and potentially destabilizing—domestic blowback.

While the Palestinian cause remains an emotive issue in the Arab world, Gulf states have grown increasingly frustrated over Palestinian corruption and obstinacy. Since 2014, the UAE has sidestepped the Palestinian Authority and instead funneled aid money through international organizations. This very public rebuke signals mounting donor fatigue with the PA and its leader Mahmoud Abbas, particularly in light of the UAE’s own fiscal struggles with low oil prices. Saudi Arabia’s Crown Prince Mohammed bin Salman reportedly said that the Palestinians need to either come to negotiations or “shut up and stop complaining,” citing how Palestinian leaders have rejected multiple peace proposals.

The Gulf states are cognizant of the benefits that bilateral ties with Israel can bring. In his interview in The Atlantic, Mohammed bin Salman acknowledged that “if there is peace, there would be a lot of interest between Israel” and the Gulf. Enmeshing Israel further into the regional security architecture will help the Gulf states’ overall goal of generating stability and countering Iran, given their shared threat perceptions. Gulf states can certainly see the appeal in collaborating with Israel’s diversified, technologically advanced economy, as they undertake transformational projects to overhaul their dependence on oil. But just as important is the trilateral angle; better ties with Israel will earn the Gulf states increased goodwill from Washington, further sweetening the deal.

Bilateral ties also present a huge opportunity for the Jewish state. Regional isolation since Israel’s founding in 1948 has created among Israelis a siege mentality and desire for acceptance. A major part of Prime Minister Netanyahu’s appeal has been his standing as an international leader and his ability to expand Israel’s ties across the globe. Bolstering ties with nearby states would be a significant coup for Netanyahu, especially with upcoming elections in 2019.

With so much to gain for both sides, the year ahead could hold significant promise. Already, Bahrain has invited Israel’s Economy Minister Eli Cohen to the Startup Nations Ministerial conference that Manama will host in April. An Israeli presence at next year’s Doha Forum might not be inconceivable, either. The Institute for National Security Studies conference in Tel Aviv at the end of January is a perfect opportunity for Arab Gulf countries to send representatives to the Jewish state, officially or unofficially—one of its sessions even focuses on Israel-Gulf detente. This year could be the year that Gulf states publicly acknowledge their ties to Israel—but that will depend on the Gulf’s reaction to President Trump’s “deal of the century” peace plan and Mohammed bin Salman’s ability to continue the kingdom’s pro-Israel moves.

Mohammed bin Salman’s pivot to Jerusalem appears to be faltering in the wake of the murder of journalist Jamal Khashoggi, with indications that the young royal, chastened by the fallout over the Saudi critic’s murder, is pulling back on risky foreign-policy gambles. Saudi officials privately concede that Mohammed bin Salman has overreached and the king, in checking the young royal’s power, is likely to restore a more traditional stance vis-a-vis the Israel and the Palestinians. Covert Saudi-Israeli outreach is likely to continue, but as Mohammed bin Salman’s role is diminished, so too are the chances of this cooperation splashing into the open next year.

The release of the long-awaited Trump peace plan could give a boost to Israeli-Gulf engagement. But with the administration repeatedly delaying the plan’s unveiling—the timeline has now slipped to March or April—Gulf states are caught in a quandary. Without a path towards negotiations, Gulf states can’t commit to sustained public cooperation. No matter how many shared interests tie them to Israel, the backlash would be too strong. But the plan’s release will at least give Israel and the Gulf states a baseline to work from: if the Palestinians openly boycott the plan or refuse to partake in good-faith negotiations, then Gulf states can rightly place culpability on the Palestinian doorstep. At a minimum, such obstruction would give the Gulf states greater leverage to bring their cooperation further into the open.

Varsha Koduvayur is a senior research analyst at the Foundation for Defense of Democracies, where David May is a research analyst. FDD is a Washington-based, nonpartisan research institute focusing on national security and foreign policy. Follow them on Twitter at @varshakoduvayur and @DavidSamuelMay. Follow FDD on Twitter @FDD.