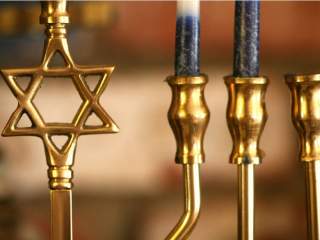 With all the good cheer and fried food, it is easy to forget what Hanukkah really symbolizes: repression, rebellion, warfare and liberation. In fact, Hanukkah is one of the earliest examples of guerrilla warfare.

We don't know much about the Maccabean Revolt of 167 to 160 BCE. There are really only two sources, and neither is reliable. We have the two Books of the Maccabees, written from the standpoint of the victorious Jewish zealots, as well as the histories written by Josephus, a later Jewish commander who fought against the Romans before defecting to them. It's like piecing together a history of the Iraq War when your only source is Baghdad Bob.

However, it appears that the old Middle East wasn't that different from the mess we have now. By the time of the revolt, nearly two centuries after the death of Alexander the Great, his empire had disintegrated. What arose in its place were several Greek mini-empires across the Balkans and Near East, which warred and intrigued incessantly among themselves. One of those empires, the Seleucids, happened to have a client state called Judea.

The Greeks allowed Judea to enjoy some autonomy in running its affairs, but a new Jewish religious and economic elite embraced Greek (Western) culture, such as athletics in the gymnasium and eating proscribed foods including pork. It didn't help matters that the Seleucid king Antiochus IV Epiphanes, whom fellow Greeks called "Antiochus the Mad," banned traditional Jewish religious practices and defiled the Temple in Jerusalem.

Client states? Westernized elites versus traditionalists who feel disrespected and marginalized? Describe such a nation today, and we would see the diplomats and relief organizations going in while the refugees stream out to escape the fighting. Imposing "modern" foreign customs that antagonize the natives? Antiochus the Mad could have taught nation-building to the Bush and Obama administrations.

In any event, incensed by unclean food, uncircumcised appendages and the prospect of being superseded by new rivals, some Jews rebelled. They were called the Maccabees (from the Hebrew word for "hammer"), and not only battled the Greeks, but fought with especial ferocity against fellow Jews they considered renegades and apostates.

Hanukkah—the Festival of Lights—is supposed to commemorate the miracle of the candles in the Temple, newly re-sanctified by the victorious Maccabees, which burned for eight days when there was only sufficient oil for one. But leaving aside religious symbolism and the laws of thermodynamics, the story of Hanukkah sounds like classic guerrilla warfare.

We tend to think of guerrilla warfare as a relatively modern phenomenon, beginning with Spanish resistance against Napoleon's occupation in the early 1800s, and progressing through the resistance movements of World War II, Vietnam, Iraq and Afghanistan.

But consider the story of Hanukkah in light of Mao Tse-Tung's three phases of insurgency. Mao envisioned a successful guerrilla war as beginning with an organizing phase where the guerrillas, initially weak, establish a secure base in difficult terrain. And sure enough, the lightly armed Maccabees headed to the Judean hills rather than fighting Antiochus's troops, who presumably were Greek-style heavy infantry clad in armor and fighting in massed phalanxes. When the Jews did fight the phalanxes, cavalry and war elephants at Beth Zechariah, they were defeated (the Jews also initially refused to fight on the Sabbath, but lack of similar Greek rectitude quickly changed their minds).

Next comes Mao's build-up phase, where the guerrillas amass strength while wearing down the enemy and forcing him to commit his resources. According to Josephus, after King Antiochus learned that troops had been defeated in several battles, "he was very angry at what had happened; so he got together all his own army, with many mercenaries, whom he had hired from the islands, and took them with him, and prepared to break into Judea about the beginning of the spring." Unfortunately, Antiochus also "perceived that his treasures were deficient, and there was a want of money in them, for all the taxes were not paid by reason of the seditions there had been among the nations."

As discovered by the European colonial empires, Japan during its occupation of China and the U.S. since 1945, it's tough to maintain global imperial commitments while bringing enough resources to bear to crush an insurgency.

Mao's final phase is the transition from a guerrilla army to a conventional army. While Judah Maccabee and his tough family started as guerrilla bands (or bandits), they eventually captured enough Seleucid weapons and gold to outfit a regular army, including siege engines.

Before we have visions of Chairman Judah waving Mao's Little Red Book, or Mao wearing a little red kippah skullcap, how much of the Hanukkah story is true? Michael Taylor, a postdoctoral fellow at the University of Texas and author of Antiochus the Great, says, "The early phases of the revolt may have looked more like rival Jewish gangs chasing each other around the Judean foothills seeking to settle old scores, with one side backed by the Seleucid garrison recently installed in the city [Jerusalem] and periodically reinforced by contingents brought in by royal officials."

Eventually, "the Maccabees fielded an organized army, based on mass conscription," Taylor told TNI. "Josephus presents it as a pretty standard Hellenistic force, divided into chiliarchies 1,000 strong." Ironically, given the later Roman destruction of the Temple in 70 BCE, the Maccabees admired Roman power and had dreams of creating Roman-style legions. It's as if the Viet Cong wanted to create their own U.S. Marine Corps.

Nor were the Judeans the only ones to rebel against the Seleucids. "The Elamites killed both Antiochus III and Antiochus IV when each tried to loot native temples, so if anything the Maccabees were somewhat behind the outrage curve," notes Taylor. "The Maccabean revolt was hardly unique, except for the odd quirk that it became included in the Biblical canon."

This may be true as a matter of history, but then again, holidays both religious and secular are more about symbolism. For 2,000 years, between the Roman conquest of Israel and the rebirth of the Jewish nation in 1948, war for Jews usually meant being victim rather than soldier. To a child imprisoned in a medieval ghetto or hiding from Cossacks during a pogrom, a story—be it memory or myth—of a Jewish nation and a Jewish army was priceless.

Some of us today will find in the Hanukkah story a measure of comfort in the continuity of human tradition. Others will despair at the lack of progress in the human condition. Either way, tonight the Hanukkah candles burn bright.