The Hard Truth About Israel for the Jewish Diaspora 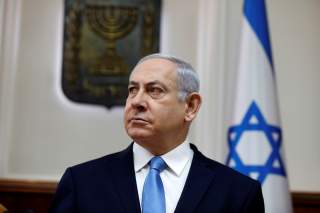 Israelis, as per usual, have a lot to say about their country’s future, including the prospect of their Prime Minister getting indicted for pay-to-play schemes. But a significant slice of America’s Jewish population also feels an obligation to weigh in, from a more critical perspective than their Israeli brethren. American Jews are significantly more dovish than their Israeli counterparts and are far more likely to support liberal initiatives such as mixed-gender prayer areas at the Western Wall.

It’s not surprising, then, that American Jews were reluctant to embrace Netanyahu, who has been in power for ten consecutive years and will likely cling to power for another four years. Netanyahu has been more supportive of a two-state solution with the Palestinians than his right-wing Likud Party peers, but the prime minister is against any notion of Israel giving up military control of the Palestinian territories.

In February, Netanyahu claimed that a Palestinian state would “endanger our existence,” and charged that his election rivals Gantz and Lapid are stealthily supportive of statehood. Bibi also wasted no time cozying up to President Trump, who is disliked by at least three-quarters of American Jews. It can’t help that, like his U.S. counterpart, the prime minister has branded critical outlets as “fake news.” But petty posturing aside, the diaspora must acknowledge that Israel’s conservative “security first” stance runs far deeper than Netanyahu. Israeli society is ensconced by a deep, cynical consensus, and Knesset elections no longer offer the sweeping contracts they once did.

It’s tempting for diaspora Jews to project their domestic politics onto Israeli politics. About 85 percent of non-Israeli Jews live in America, France, Canada, and the United Kingdom—all countries with defined parties clearly at ideological odds with one another. The identity of these parties may be shifting, but polarization is stronger than it has been for a long time.

This is simply not the case in Israel. More than anything else, the face-off between Netanyahu and Gantz resembled an American primary where candidates try hard to find and exploit disagreements that barely exist.

Up until the bitter end of the election, Netanyahu tried to paint Gantz as supportive of a two-state solution, despite a lack of evidence this was true. The General went on the record opposing efforts to remove existing settlements, and even flirted with annexing Palestinian areas. In the last days of the campaign, Netanyahu decisively one-upped his rival by promising to annex West Bank settlements outright if reelected.

But rhetoric means even less in Israeli politics than American politics, and Israelis by-and-large have acknowledged that even if Gantz had won, a state of affairs-as-usual would prevail, including limited Palestinian sovereignty under a watchful Israeli eye.

Gantz has acknowledged as much, conceding in a recording that his top governing priority is ousting Netanyahu, who he claims “sold out the country.” The key difference between the two rivals, then, is the continued baggage that Netanyahu brings to the helm of the Israeli government. Netanyahu still faces possible indictment, but Likud’s probable right-wing governing partners are open to passing a new law that would make Netanyahu’s indictment all-but-impossible.

These scandals aside, business-as-normal will continue after Netanyahu cobbles together his new government. This normality, which includes compromises on multi-gender prayer areas at the Western Wall and gently shooing away settlers that are too close to Palestinian areas, may surprise some diaspora Jews still reeling from Bibi’s annexation rhetoric. But even when it looked like Gantz might eke out a victory, there was never any prospect that a different status quo would emerge.

Any chance of the dominos falling any other way was destroyed by successive Palestinian intifadas and the emerging domestic Israeli recognition that there neither Fatah or Hamas could be “good faith” peace partners. Dovish diaspora Jewish groups such as J Street should work within this reality, and attempt to influence Israeli politics on the margins to make things better.

Fortunately, Israeli politics magnifies the importance of small, niche parties, since larger parties such as Likud need to court them in order to form a coalition government. This time around, secularist, right-wing party Yisrael Beiteinu will likely clear five Knesset seats. The party has pushed for increased separation between executive and legislative branches of government, making it more likely that the excesses of one branch (such as the current bribery scandals) could be checked by independent investigations in the other branch. One compromise to increase oversight could also include a promise of immunity for Bibi, followed by an increase in checks and balances.

Another party with suggestions for reform is the Zehut Party, which could be a long-term success. Zehut is a libertarian Zionist party that was poised to cross the 3.5 percent voting threshold to get parliament representation but seems to have just missed the hurdle.

Zehut, led by Moshe Feiglin, has loudly supported deregulating Israel’s state-dominated economy. This is important because Israelis and Palestinians alike pay far more for staples such as chicken, milk, and oil than residents of other countries do because of import controls and duties.

These policies disproportionately harm poorer communities, meaning that Arabs bear the brunt of protectionism from the Israeli government. Meanwhile, rigid land planning committees and policies get in the way of Palestinians building houses and businesses.

Instead of holding out hope for an electable dovish party, liberal-leaning Jewish groups around the world should cheer on parties such as Zehut to end these unfair policies.

Ultimately, much can be achieved within the confines of modern-day Israeli politics. But measuring success by leaps-and-bounds rather than incremental improvements will only widen the distance between Israel and the diaspora. Calls for Netanyahu to step aside even after reelection are understandable—so long as everyone understands the limits of change. Regardless of Netanyahu, the real key to change will be reform on the margin. But in the meantime, the diaspora should be prepared to accept Israel as it is.

Ross Marchand is a Young Voices contributor in Washington, DC.