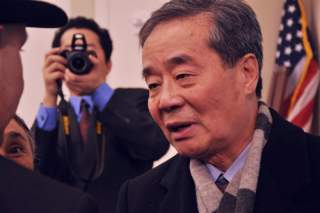 I recently spoke at a memorial at the Library of Congress for my friend Harry Wu, a tremendous champion of human rights who dedicated his life to exposing China’s horrific brand of communist repression. As Beijing’s ever-increasing financial and military power has led many in our nation’s capital to curtail their criticisms and concerns regarding this totalitarian behemoth, we could always count on Harry to set us straight. Harry never hesitated to lay out the discomforting facts, warts and all, about the gross human rights violations taking place behind the barbed wire of the Bamboo Curtain.

Harry was himself a victim for almost two decades of China’s insidious “laogai” reform-through-labor system. Harry could not, as a matter of conscience, forget the millions he left behind, including an estimated fifteen million dead, in the largest slave labor camp system in the post-WWII era. What will we do without having Harry’s voice to proclaim over all the propaganda about “China’s peaceful rise” the very ugly reality lying just below the surface?

Not content with drawing upon his own nineteen years of personal experience as a slave laborer in this Maoist penal system, Harry made surreptitious returns to China to gather further evidence of gross human rights violations. In 1992, while a visiting scholar at the Hoover Institute at Stanford, Harry published Laogai: The Chinese Gulag.  His most celebrated return to mainland China occurred in 1995 when, by then a U.S. citizen, Harry was arrested on the Chinese border and sentenced to fifteen years in prison for “stealing state secrets,” before being rapidly deported after a concerted international campaign to secure his release.

I am proud to have worked with Harry on a number of human rights issues regarding China in my years on the House Foreign Affairs Committee. As some rushed forward to approve permanent normal trade relations with communist China, Harry cautioned that the resulting flood of Chinese cheap manufactured goods into the American marketplace would include a number of items produced by starving and tortured slave laborers. Harry was also an invaluable source of information when I began investigating, over a decade ago, recurrent reports of Beijing’s targeting dissidents and harvesting their organs and those of other prisoners for profit. He helped us secure the testimony of a Chinese military defector who had witnessed the summary executions to obtain organs for sale to wealthy buyers.

Harry’s concerns for gross human rights violations within China went beyond his focus on the penal system. He and his organization provided important data that was supportive of Congressional efforts in seeking passage of resolution on China at the former UN Human Rights Commission in Geneva. When I became Ranking Member on the Foreign Affairs Committee in 2007 and the new Chairman, Tom Lantos, and I put renewed emphasis on human rights issues regarding China, Harry was always there to lend his support. After a hearing on Yahoo’s collusion with Beijing in suppressing internet freedom, Harry stepped in on behalf of those who had been imprisoned and their families. And in one of his last visits to Capitol Hill in November, Harry talked about his experience in China, reminding us that it was the Soviets who helped set up Beijing’s gulags, and reprimanding the successive U.S. administrations which have chosen to ignore China’s human rights abuses in favor of increased commerce.

Harry’s was a powerful and determined voice for the truth – no matter how inconvenient the facts may have been – and he will always be remembered for the courage with which he pressed on despite overwhelming odds. Just a few months ago, Harry quoted an ancient Chinese proverb to me, saying, “Big accomplishments come from an accumulation of little achievements made one at a time.” But for Harry, all of his achievements were big, and his efforts in the name of justice will continue to reverberate long after he is gone.

As another ancient Chinese proverb says, “one justice can overpower a hundred evils.” Harry’s life was a testament to that as he tenaciously fought for each and every bit of justice that China’s victims deserved. Harry’s legacy will continue to go forward through his Laogai Research Foundation in Washington, DC, and it is for us who remain to ensure that the bright, harsh light Harry first shone on the dark secrets of Beijing’s human rights record will not be extinguished, seeing to it that the justice for which Harry so bravely fought will be finally be served.

Ileana Ros-Lehtinen, a Republican member of the U.S. House of Representatives from Florida, is Chairman of the Subcommittee on the Middle East and North Africa and is a member of the Permanent Select Committee on Intelligence.