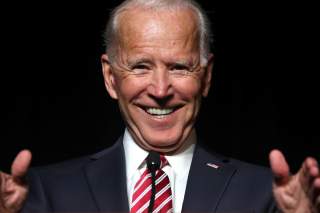 The waiting, wondering, and vacillating are over: Joe Biden is getting into the presidential race, and he has every intention of fighting like hell to kick Donald Trump off the White House grounds.

In a three-minute video announcing his candidacy, the former vice president was emphatic and determined—so much so that you could be forgiven for thinking the American republic would be utterly destroyed in the event of four more years of Trump. “We are in the battle for the soul of this nation,” Biden said in the video. “I believe history will look back on four years of this president and all he embraces as an aberrant moment in time. But if we give Donald Trump eight years in the White House, he will forever and fundamentally alter the character of this nation, who we are, and I cannot stand by and watch that happen.”

The theme was almost identical to the one Biden delivered earlier this year during the Munich Security Conference, where he implored worried members of the European security elite and intelligentsia not to lose faith in the United States. “I promise you, I promise you,’’ Mr. Biden told the crowd. “This too shall pass. We will be back.” Who Biden meant by “we” was left unaddressed. In hindsight, though, his appearance in Munich served as a prelude to his official presidential announcement.

The veep has a lot of things going for him. He has been at the top of polling consistently, despite only just declaring his presidential intentions. Biden’s name-recognition is off the charts, something only Sen. Bernie Sanders can compete with. Despite being in politics since his early twenties, Biden has long marketed himself as an ordinary guy from Scranton, Pennsylvania who was elected to represent the interests of the working and middle classes. Nicknames like “Uncle Joe” and “Middle-Class Joe” can sound cheesy and over the top, but it rings authentic to a lot of people. If Hillary Clinton was the cookie-cutter career politician, Joe Biden is the gaffe-prone but gregarious career politician.

With Biden’s candidacy, the 2020 Democratic presidential primary is for the most part solidified. There are about twenty candidates (or it is it twenty-one?) in the field right now vying for the title of nominee, but more than half of those candidates are jokes, no-names, or opportunists looking to sign a book deal or increase their brand in preparation for future presidential bids. Because many of the Democratic Party’s biggest donors largely stayed on the sidelines waiting for Biden’s decision, the vice president’s candidacy will unleash gobs of money into a race that has already been defined by copious amounts of small-dollar contributions. Biden, who has never been a great fundraiser in his career (sitting in a safe blue state for over thirty-five years will do that), knows his limitations; he has spent hours on the phone with traditional donors sounding them out for cash and pleading for their assistance. He understands that if the money doesn’t come pouring in immediately, the political pundits on television will begin questioning whether the septuagenarian’s time in the spotlight has passed to a new generation.

It would be a fool’s errand to make any predictions about where the Democratic primary is going, which candidate will break out, and which will have their own personal Howard Dean moment. Candidates in the past who were thought of as front-runners or shoo-ins—Gary Hart in 1988, Rudy Giuliani in 2008, Jeb Bush in 2016—all turned out to be also-rans. In addition, those who were originally seen as gadflies, insurgents, or protest candidates—Barack Obama in 2008, Bernie Sanders and Donald Trump in 2016—either did better than anyone expected or won the presidency outright.

Joe Biden could be the next Jeb Bush, crashing and burning early and leaving a lot of money on the table. Or he could be the next John Kerry, a safe choice for a Democratic Party searching for someone with high credentials in a tough presidential election year.

All we can say for sure is that the Democratic primary just got a lot more interesting.