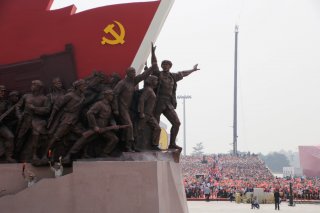 The recently held Sixth Plenary Session of the Nineteenth Chinese Communist Party (CPC) Central Committee is interesting for many reasons, and its materials are now discussed around the world. This is not surprising, given that the session spelled out the development strategy of the world’s largest power. But I would like to draw attention to the largely unnoticed fact that in these documents China claims to have created a new civilization that outshines all others.

Stated briefly in the communique adopted at the conclusion of the plenum, this curious idea reads as follows: “Under the leadership of the CPC, the people successfully paved the way for modernization with Chinese characteristics, created a new form of human civilization and expanded the ways for developing countries to achieve modernization.”

This idea was developed in more detail in the Resolution of the CPC Central Committee on the Major Achievements and Historical Experience of the Party over the Past Century that was published several days later. It reads:

Over the past one hundred years, the Party has struggled for both the happiness of the Chinese people and the revival of the Chinese nation, as well as for the progress of humanity and the Great Harmony in the world, and its tireless struggle has significantly changed the trends and patterns of global development. Party leaders have successfully paved the way for modernization with Chinese characteristics, created a new form of human civilization, expanded the ways that developing countries can modernize and provided completely new alternatives to countries and nations seeking to accelerate their development and wanting to preserve their independence.

Thus, the CPC views the creation of a new form of civilization as one of its main contributions, not only to the Chinese people, but also to the world as a whole—and especially to developing countries, to which it has given a new, more effective alternative for accelerating modernization.

What is the significance of China’s civilizational approach? In effect, it indicates that Chinese leaders accept the theory of a plurality of civilizations, each developing in different ways and arising throughout history as a criticism of Eurocentric models of development that emerged within the general Enlightenment paradigm.

The term “civilization” is quite young, having appeared in European languages as recently as the second half of the eighteenth century. It was used to denote the concept of a cultured and educated society or people that existed since the time of Ancient Greece where “tempered mores” prevailed, in contrast to barbaric, wild, and uncultured societies. The ideas of social progress that emerged during the Enlightenment placed civilization on a higher level than barbarism, such that civilization came to be considered a higher stage of societal development.

In this regard, Marxism was a fairly typical Enlightenment theory, although, perhaps, one of the most developed and convincing—and its founders were enlightened Eurocentrists. They believed in the world’s fundamental unity and that all societies go through the same stages of development, albeit at different times in history and, in some cases perhaps, by skipping over certain stages (as Karl Marx, for example, believed at the end of his life with regard to Russia). So, they used the term “civilized” in this traditional sense to denote a more developed society. Thus, in his 1947 work The Principles of Communism, Friedrich Engels, Marx’s closest associate, wrote that the communist revolution “must take place simultaneously in all civilized countries – that is to say, at least in England, America, France, and Germany.” Here “civilized” obviously means “more developed.”

It was in the nineteenth century that the theory arose of civilization as a certain body of spiritual and cultural features characteristic of different peoples and cultural centers that might differ from each other without necessarily representing a particular hierarchy of development—that is, without being located at a higher or lower level of development, but evolving in different directions. It appeared in the wake of the rise of romantic nationalism and conservatism that attempted to prove the value and uniqueness of the historical experience of each major nation. Whereas, traditionally, “civilization” had stood in opposition to “barbarism” as such, civilizations now began to oppose one another.

It is no coincidence that the work of one of the founders of this theory, a Russian thinker Nikolai Danilevsky—who was the first to identify ten separate “cultural and historical” types or civilizations—is called Russia and Europe and is largely devoted to criticizing European civilization as opposed to a certain Slavic type that was yet to appear. For him, a single, unified humanity is an empty abstraction. This theory was advanced in works by such authors as Oswald Spengler and Arnold Toynbee, and more recently in rather simplified form by Samuel Huntington.

China itself also had supporters of the theory of civilizations, which was especially widespread in the first half of the twentieth century. Particularly famous at that time were the works of a philosopher and public figure Liang Shuming, according to whose teachings three world types of culture—the European, Chinese, and Indian—were examples of the development of three main groups of human needs: material, social and spiritual. After the CPC came to power, such theories were criticized from a Marxist standpoint; Mao Zedong personally condemned Liang Shuming and the philosopher fell into disgrace for a long time for not recognizing the theory of Marxism, and particularly the idea of class struggle.

Thus, by adopting the theory of the difference between civilizations, Chinese authorities are effectively adopting the tradition of Danilevsky, Spengler, Liang Shuming and Toynbee and rejecting that of Marx, Friedrich Engels, and Vladimir Lenin who believed in a single human civilization and a straight line of progress, the common goal of which is to build an ideal and uniform society of worldwide communism.

To be fair, it must be said that the Chinese approach does retain certain Marxist, or at least Enlightenment features. The plenum documents suggest that there are not only different forms of civilization, but also a kind of single “human civilization” to the development of which “the Chinese nation, as an ancient and great nation of the world” … “has made an unfading contribution” by creating a “brilliant civilization with more than 5,000 years of history.” Moreover, the term “civilization” is sometimes used in the original sense of the “level of development.” For example, the resolution credits the Communist Party with “assimilating all of the best achievements of civilization created by mankind.” According to the official theory, China’s brilliant traditional civilization was “covered with dust” due to the invasion of Western powers and feudal rule. The achievement of the CPC lies in having revived that civilization and continued its tradition, and in creating on its basis a kind of “new human civilization,” a new form of civilization. According to the Chinese view, this new form is one of several, or even many civilizations that currently make up mankind’s common civilization.

Nevertheless, the idea of the uniqueness of Chinese civilization is clear. First—very much in the tradition of Danilevsky and his followers—it is described as complex and consisting of numerous aspects. Chinese leader Xi Jinping himself spoke about this, noting this July in a speech devoted to the hundredth anniversary of the CPC that a new form of human civilization was created in China as a result of the construction of socialism with Chinese characteristics and the coordinated advancement of material civilization, political civilization, spiritual civilization, social civilization, and ecological civilization.

Immediately after China’s leader mentioned a new form of human civilization, the country’s social scientists began developing his ideas. One of them explained,

Material civilization determines man’s relationship with things and realizes the goal of the joint use of material achievements by all peoples on the basis of “a significant increase in the sum of productive forces.” Political civilization determines the relationship between the Party and the people, that consists in maintaining the leading role of the CPC, the understanding that the people are in charge, organic unity based on the rule of law and “the broadest representation of the interests of native peoples.” Spiritual civilization determines a person’s relationship with himself. It is necessary to be strictly guided by the patriotic feeling expressed in the saying, “Everyone is responsible for the prosperity or decline of the Celestial Empire,” observe the rule of decency, according to which words should not differ from deeds, the rule of benevolence, “Do not do to others what you do not wish for yourself,” the spirit of tolerance, expressed in the principle of “harmony, while maintaining differences” and the requirements of other values. Social civilization determines man’s relationship to other people, emphasizes peaceful and harmonious coexistence, ensuring and increasing the well-being of the nation and promoting the principle of social justice. Ecological civilization determines the relationship between man and nature, maintaining and improving the system and mode of ecological civilization and creating the conditions for man’s harmonious coexistence with nature. On the whole, the new Chinese path to modernization is not a single line, but a path for the comprehensive development of civilization. The Chinese project is offered to the states and nations of the world that are striving to find a better social system.