Has the Dollar Fixed Venezuela’s Economy? 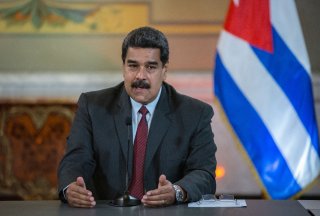 Following the West’s repudiation of the Maduro regime, for a class of government-connected Venezuelans commonly referred to as enchufdos—those who are “plugged” into government—there came a fear to invest internationally. When faced with the prospect of sanctions, incarceration, and frozen bank accounts, this ragtag group, composed mainly of members of the enabling old elite and phony populists who became the country’s nouveau riche, had to innovate.

In the pursuit of new money flows, and limited by an inability to re-invest their ill-earned dollars with confidence, this group, accompanied by so-called anti-imperialists, suddenly went all-in with the de facto dollarization of the Venezuelan economy. With this came not only the unexpected opening of a Ferrari dealership in the capital, but what many referred to as “La Era del Bodegón” (The Age of Bodegas), a term used by shocked, sometimes optimistic, and often satiric, Caraqueños who—after enduring the absence of milk, toilet paper, and sugar—started to see the rise of bodegas with, to many’s surprise, basic essentials.

This is all rather uneventful, some may think, but with this perceived progress came a reduction of expressed social discontent.

This is not due to a substantive change in the state of affairs. The country remains corruption-ridden and the currency hyper-inflated. To this day, there are gasoline and water shortages (yes, in Venezuela). The overwhelming majority of the population lives under the poverty line. Still, even when the emigration numbers are comparable with those in Syria and Ukraine, thousands who have been forced to live miserably can be made ecstatic with vacuous, slight progress. Under the guise of social betterment, it appears that there is nothing more than a superficial notion of modernization.

To properly assess the situation on the ground, it’s necessary to examine social relations within the country with honesty—and without unshakeable faith in development theory. This means that instead of expecting dissatisfaction with the regime, hoping for it to perish or for imminent revolution to happen, we must take all predictions with a grain of salt. Criticism of the country’s fractured opposition and commentary regarding the changing approach of foreign actors may carry some validity. But the two are insufficient without a deeper exploration of how the population of Venezuela feels about the country they live in today, as multifarious as that feeling may be.

The claim that “Venezuela se Arregló,” which translates to “Venezuela has been fixed,” has become ubiquitous in popular discourse, although sometimes it is expressed in an almost nihilistic manner. In family reunions and parties, in the supermarket and after church, and throughout the country, overhearing these debates is unavoidable. As journalist Alonso Moleiro claimed in El País, the phrase has become a mirage that torments the national consciousness, as its expression alludes, correctly, to some progress in the proliferation of establishments, while others believe that the utterance in itself looks over the galloping monetary catastrophe and the ever-evolving human rights crisis.

As someone who lived a significant part of my life in the country, and is visiting Caracas for the first time in six years, I decided to examine what the “Venezuela se Arregló” claim really means by talking to Venezuelans themselves.

As I arrived in Caracas, once known as “the Pearl of the Caribbean,” my first conversation was with a talkative taxi driver and family man from San Cristóbal. When I asked about the now-popular saying, he outright coarsely responded: “pure bullshit.” He explained that his nephew “spent three months in prison after the 2012 protests, even when he was not protesting.” In his words, the true intention of his capture was criminal, as “the national guard asked for four thousand dollars” for his release. With visible horror, he claimed that, while arbitrarily detained, his nephew was terrorized to such a degree that, when his nephew’s mother brought maize-based arepas for her son, they were filled with human feces—an attempt to degrade the now traumatized young man.

“Fear”, he said, “combined with the need to adapt to changing circumstances” has reduced public demonstrations, saying that those who claim that things are better were privileged beforehand. He suggested that the recently built business establishments appeal to a select few, as the average Venezuelan would have to work for weeks to afford a plate at one of the more trendy restaurants. If conditions were getting better, he posited, “there would not be thousands selling everything they have to leave their home country in precarious conditions.”

The next day I talked to a very different sort of individual: a college student at the Metropolitan University of Venezuela. We met at a burger joint. The food was good, the prices were higher than I expected, and the conversation lovely. Without having to ask, he updated me on how much has changed since he last saw me.

“Do you remember Las Mercedes?” From what I could recollect, it was the nicer part of the city, with good gastronomy and nightlife. But then again, the last time I was in the city I was a sixteen-year-old and lacking a sophisticated palate.

According to him, Las Mercedes is now “literally the bastard child of Paris.” Semi-jokingly, he explained that the district is “all lit-up as if it were Times Square, with rooftops, and hundreds of new restaurants.” To this, he added that there is a replica of the iconic Miami-based nightclub, E11EVEN, which has been conveniently baptized as “Twelve.” According to him, it is “just a hole in the ground, but still, there are plenty of new places to party,” something that previously did not exist. If this sounds exaggerated, then BBC’s Norberto Paredes calling the district “the epicenter of Venezuelan capitalism” should be even more eye-catching.

Following this, I talked to one friend’s mother, and she had a lot to say. From a six-floor glass-covered gallery, with all the luxury brands named Avanti to several padel courts built by the family of First Lady Cilia Flores, she suggested that Caracas “has been fixed.” She emphasized that “all the money is dirty, but people don’t think about it too much,” suggesting that “it’s always been corrupt, so for some, it’s a matter of a corruption that at least builds, or a corruption that only destroys.”

Like her, another mother helped me learn a lot about the absurd changes in the city. She talked about Altum, a floating Dubai-style restaurant that lifts its customers to incredible heights with a crane, which she described as “insane and obscene,” claiming that she has no doubts “money laundering is behind it.” Additionally, she talked about the opening of Salvaje Caracas, a luxury Japanese cuisine chain with restaurants in Paris, Miami, and Madrid.

In her eyes, although a few businesses weren’t started by enchufados, there is no doubt, and in dozens of cases, it has been proven, that those connected with the narco-state are behind most of the development. The mother exclaimed that “they have billions of dollars that they cannot hide.”

Regarding the bodega phenomenon, the college student suggested that “there are more American products here than in the United States.”  Putting aside this fascinating sales pitch, the tone of the conversation shifted when I queried if this was a marked departure from the old status quo. “Even ‘Venezuela Plus’ is still Venezuela,” he asserted, suggesting that the water is still cut on a day-to-day basis, and that, “the wifi still sucks.” When pressed about the social discontent, he claimed that “there are no protests anymore,” explaining that being an enchufado has become so normal that even the old elites have many of them in their friend groups.

When talking to an older man while in line for some pastries, I found general agreement. Although more politically focused, the man told me that the revolution-esque discourse has been replaced with cohabitation, and many of the people with any money left are either in “survival mode or taking advantage of the changing business environment.” He claimed that the opposition is filled with opportunists who, when push comes to shove, benefit from the status quo, stating that, “everyone hates Maduro, but no one does anything, so it is just what it is.”

With notable hopelessness, and maybe a tad of indifference, another student, this time from Andrés Bello Catholic University, told me that “with things the way they are, who cares who is in power?” He continued, “all politicians in this country are corrupt, Venezuelans have a short memory, and those with power who could challenge Maduro lack balls,” claiming that, unlike what some “Guaido-lovers hoped,” things will not change. If anything, he stated, “Maduro’s grasp on power will become even stronger.”

The foreign policy world must be made aware of these sorts of views and developments. From regime change supporters to barrier-reduction advocates, it is essential to grasp how the Venezuelan regime and its enablers have reacted to a hostile international market and how their reaction affects the prospects of political change. Only by doing this can policymakers enhance their approach to this particular South American nation, so that any steps made actually advance tangible, lasting goals. Even more so, for those who seek to understand how nations change, if anything can be learned from these interviews it is that much can be extracted vis-à-vis social relations within a country from how citizens interact on an ordinary basis.