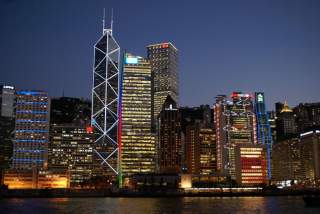 From 1981 to 2015, Hong Kong sustained an annual growth rate of almost 5 percent, despite numerous global recessions. It was a testament to the power of economic freedom.

For twenty-one consecutive years, The Heritage Foundation’s Index of Economic Freedom has ranked Hong Kong’s economy as the freest in the world—and for good reason. The overall tax burden is only 15.7 percent of GDP. The average tariff rate is 0 percent. The entrepreneurial environment remains one of the world’s most transparent and efficient. Hong Kong also serves as a very important banking and financial center in the Asia-Pacific region. And underpinning its free-wheeling business and trade environment are property rights rated among the strongest in the world.

In recent years, however, Hong Kong’s underlying economic statistics show clear signs of deterioration. Over the last five years, despite modest global economic expansion, Hong Kong’s economy has grown at an annualized rate of only 2.3 percent, roughly equivalent to that of the United States. The government forecasts that Hong Kong’s economic growth will drop to 1 or 2 percent this year, and exports are projected to decline by 4 percent.

Hong Kong’s gross national savings rate declined from 36 percent in 2008 to 25 percent in 2015, leaving fewer funds for domestic investment. The fertility rate (per 1,000 females aged 15 to 45), has fallen from 65.2 in 1981 to 35.9 in 2014, dramatically reducing the growth of the working-age population. More importantly, productivity growth, which ultimately determines living standards, faltered to a paltry 0.8 percent during the past four years.

A look at Hong Kong's real GDP growth in recent years is also quite revealing. According to John Tsang, Hong Kong’s financial secretary, the economy now faces the “worst time in 20 years.” The big question is: Why the pronounced slowdown in the world’s freest economy?

A number of reasons present themselves. First, there is Hong Kong’s increasing dependence on China’s economy and its external trade. Hong Kong is by far the most significant transporter of exports and imports to and from China. In 2015, 61 percent of reexports were Chinese in origin and 54 percent of Hong Kong’s exports were sent to the mainland. This is an extraordinary degree of economic interdependence.

Moreover, Hong Kong’s resentment toward mainlanders has increased, primarily due to Beijing’s political interference. Tourism from the mainland, an important engine for Hong Kong’s economy, has decreased as a result. In the first half of this year, tourism was down 12 percent. The rift has also affected home prices in Hong Kong. While still among the most expensive housing markets in the world, home prices have gone down 15 percent in the last year and a half.

Once the largest container port in the world, Hong Kong has fallen to fifth place as exporters have switched to Chinese mainland ports. Last year, Shanghai was the world’s busiest port.

Increasingly, China is allowing state-owned and private enterprises to fail. Chinese nonperforming loans are officially 1.8 percent but the actual rate is likely closer to 30 percent. Hong Kong banks invested in the mainland are starting to bleed.

Currency woes are another reason for increased pessimism. The Hong Kong dollar has been pegged to the U.S. dollar since 1983. Higher interest rates in the United State, at least over the near term, are now highly likely. To maintain its fixed peg, Hong Kong would have to raise domestic interest rates at a time when the economy is faltering.

Symbolizing the increasing connectivity between the mainland and Hong Kong is the construction of the most expensive (nearly $11 billion) high-speed rail ever built. In addition, a thirty-kilometer system of bridges and tunnels will connect Hong Kong, the casino center of Macau and the mainland city of Zhuhai.

Hong Kong remains the world’s freest and most dynamic economy. But its ties to the “mostly unfree” mainland are hurting it badly. As a result, Hong Kong’s economic performance is stumbling, tarnishing its reputation among those not looking deep enough beneath the surface.

William T. Wilson is a former chief economist for Ernst & Young and is currently a senior research fellow in The Heritage Foundation’s Asian Studies Center.