Has Russia Paved a Path for Turkey to Capitalize on the Nagorno-Karabakh Conflict? 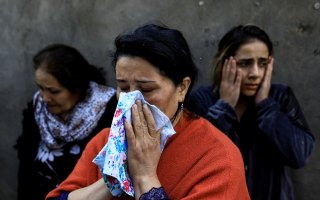 Long seen as a key Russian partner in the South Caucasus, Azerbaijan has steadily drifted into Ankara’s sphere of influence.

In weeks following a Russian-brokered ceasefire between Armenia and Azerbaijan to end the conflict in Nagorno-Karabakh, a slew of fresh evidence has emerged to suggest that Turkish-Azerbaijani military cooperation is even more tight-knit than has been alleged by previous reports.

The Nagorno-Karabakh conflict was, in large part, conducted through the use of combat drones. A recent investigation by Russian publication Vzglyad found that Azerbaijan’s Bayraktar TB2 drone strikes against Armenian and separatist targets were coordinated by a Turkish major-general who has been in Baku since at least July. Whether or not the TB2 drones were secretly imported or belonged to the Turkish army remains unclear—regardless, Russian military experts widely agree that they were operated by Turkish personnel. Further still, Vzglyad’s sources maintain that the Azerbaijani military was subordinated to roughly 200 Turkish military advisors who reported directly to Ankara throughout the conflict. “Karabakh belongs to Azerbaijan,” retired Azerbaijani Lieutenant Colonel Oleg Guliev told Vzgyad. “Azerbaijan must fully restore Karabakh, that is right and just. But we must restore Karabakh ourselves. If we restore it on a Turkish leash, then we will get only Karabakh, and  we will lose the rest of our country.”

Not only did Turkey wage the Nagorno-Karabakh conflict through drones, military advisors, special forces commandos, and imported Syrian mercenaries, but there is also a growing body of evidence to suggest that Ankara played an outsized role in Baku’s decision to launch the September offensive. A panoply of high-ranked Turkish officials met with their Azerbaijani counterparts throughout the summer to discuss the Nagorno-Karabakh problem, and Turkish arms sales to Baku exploded in the months leading up to the September offensive.

This development has been long in the making. For years, Azerbaijan’s Soviet-derived officer corps has been gradually replaced by personnel who received their military education in Turkey and continue to closely coordinate with Turkish advisors. Ankara has seemingly acquired near-total veto power over Azerbaijan’s defense and military cadres, with Baku recently dismissing Defense Minister Zakir Hasanov—at Turkey’s request—over his alleged ties to the Kremlin. Another Azerbaijani defense official, Najmeddin Sadikhov, was formally accused of treason after criticizing Turkish involvement in the Karabakh conflict: “if we give the Turks our army, maybe we should give them our wives too?,” said Sadikhov in early October.

Turkish influence over Baku extends well beyond military matters. Turkish president Recep Tayyip Erdoğan’s government has worked tirelessly to penetrate Azerbaijani political culture and society with the Pan-Turkist vision of “One Nation, Two States,” asserting that Turkey and Azerbaijan are bound by a common destiny on the basis of a shared ethnocultural identity. Turkey is broadcasting similar messages to Turkic populations across the post-Soviet sphere, but nowhere have they resonated as profoundly as they did in Azerbaijan.

With the Nagorno-Karabakh conflict, Baku’s gradual geopolitical drift has come to a head: once a Soviet Republic and later a major Russian regional partner, Azerbaijan is increasingly acting as a proxy for Turkish interests in the South Caucasus. Baku’s political shift has not gone unnoticed by Russian politicians and commentators, but there is no consensus in Moscow on how best to engage a Turkish-aligned Azerbaijan.

Russian president Vladimir Putin tepidly acknowledged Baku’s lurch toward Ankara at a conference earlier this week. Describing Turkish support for Azerbaijan as a “geopolitical consequence of the Soviet collapse,” Putin also noted that “Azerbaijan is a sovereign, independent government. Azerbaijan is within its rights to pick its allies as it deems necessary. Who can deny them this?”

The Kremlin’s immediate efforts are centered on preserving the integrity of the Russian peacekeeping mission in Karabakh, drawing red lines on Turkish and Turkish-sponsored military encroachment into the contested zones. Political commentators have warned that the Kremlin has few tools at its disposal to prevent Turkey—a NATO member—from establishing permanent naval or air bases on Azerbaijan’s territory and potentially contesting Russia’s presence in the Caspian Sea. Expressing concern over the extent of Ankara’s control of Azerbaijan’s foreign policy, Russian lawmaker Konstantin Zatulin called on the Kremlin to take a forceful stand against Turkish military presence in Karabakh.

Despite formally being a military ally of Armenia, Moscow has long attempted to play the role of neutral broker in conflicts between Yerevan and Baku. That approach may have run its course. Now that the fault lines of Russian influence in the south Caucasus have been clearly drawn, it remains to be seen if Moscow will opt to recommit to its Armenian security guarantee as a bulwark against the further projection of Turkish power in the region. “Our relationship has its roots in cultural and religious affinity,” said Putin in a recent interview with Russian state news. “And that is more important than relations between individual people. We remember this, we will never forget this, and it lies at the heart of our cooperation with Armenia.”